Last year, Sally Beauty Supply had two dancing ornaments; I had just started with the design crew, so someone else sewed them and I added some jewel bling. This year it was to be shopping bags a la 1950s cigarette girls.

Larry made one frame and sent it home with me to make a prototype that could test and be tested by some leggy models so they could start the selection process. 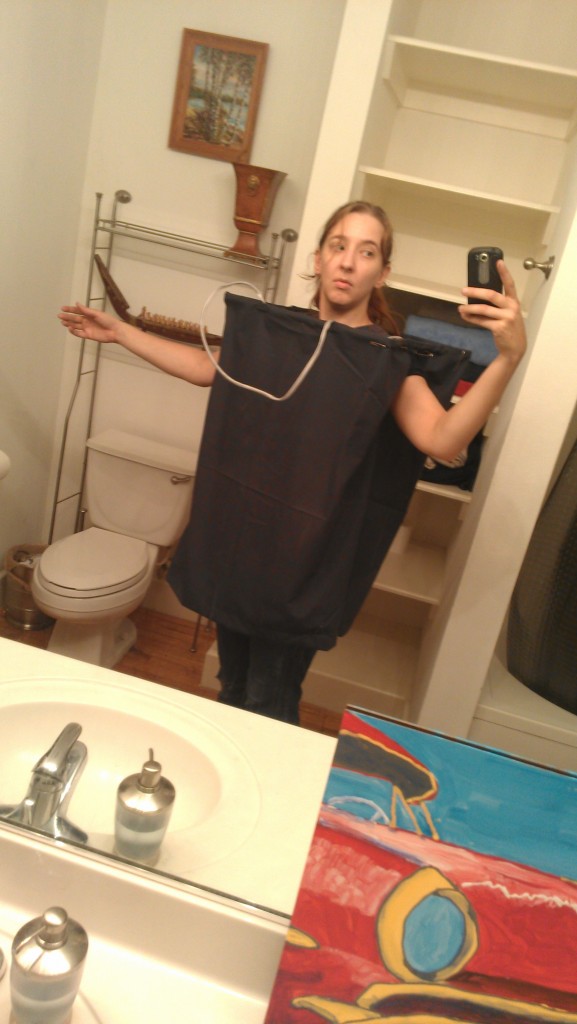 Here it is again, not in a bathroom: 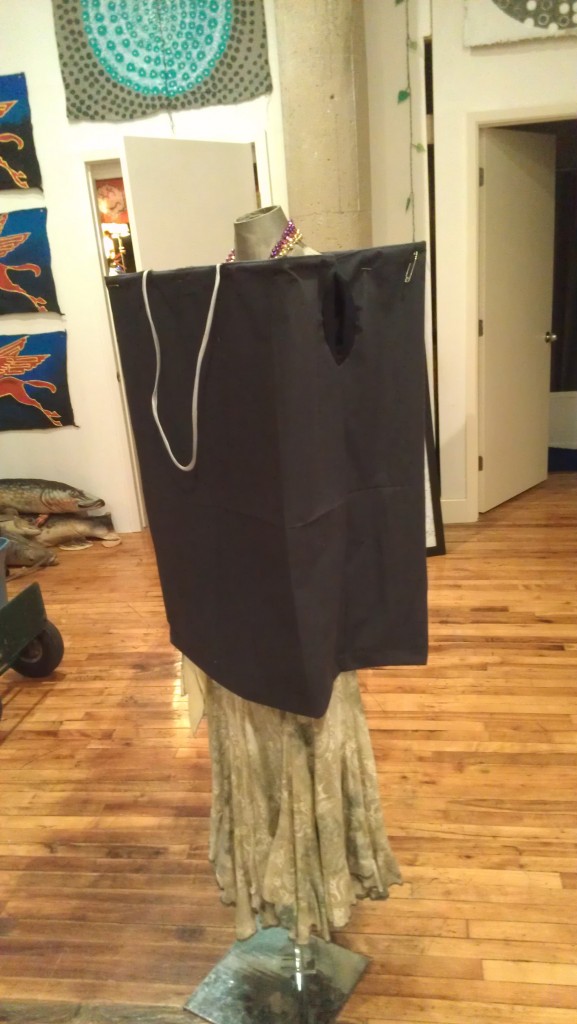 The printed fabric arrives at last! 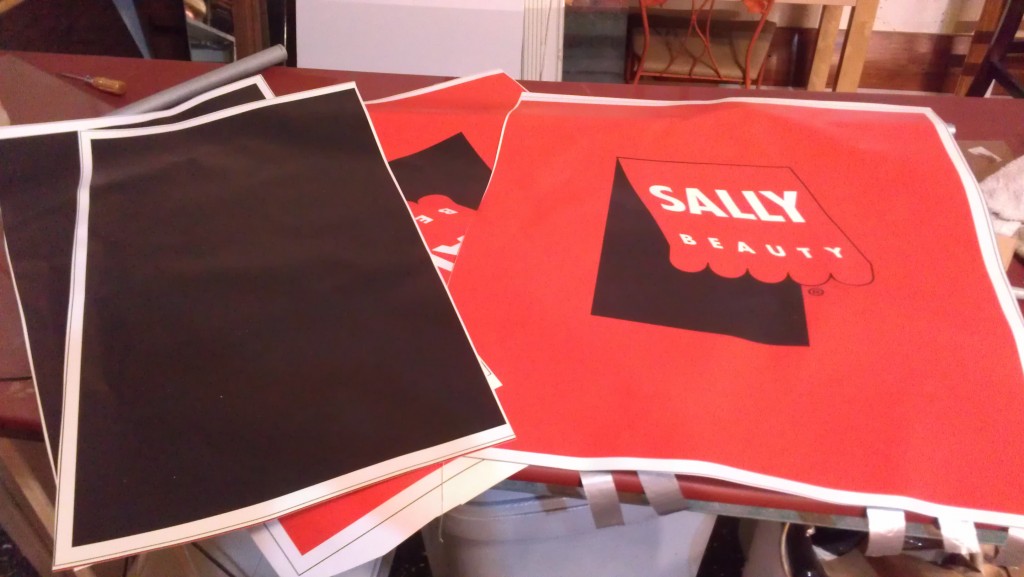 I cut down the middle of each black side to make the fold and armhole. It was so tight there wasn’t much room for seam allowance and no room for error: 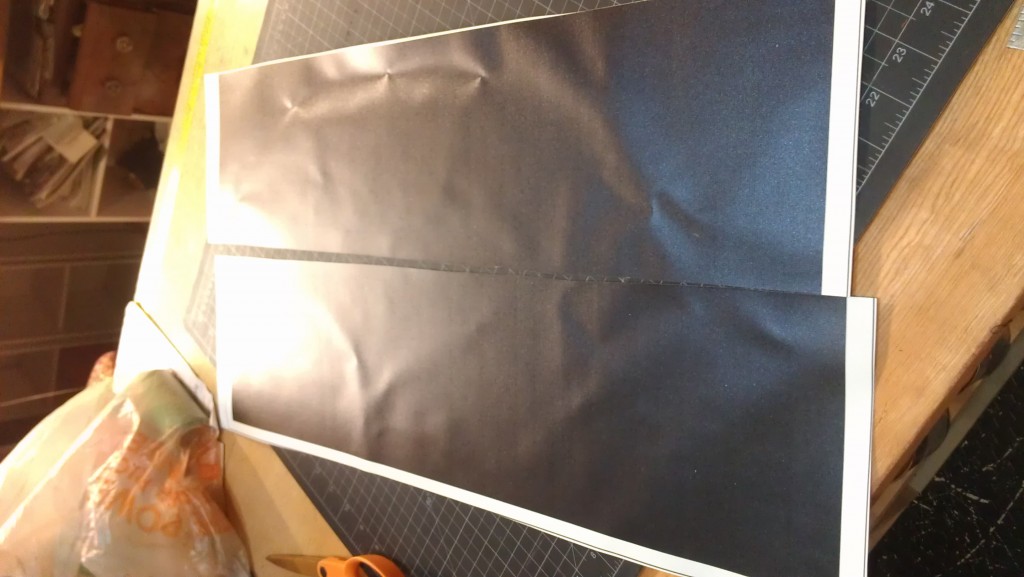 This is what an error looks like. It gets etched into this fabric: 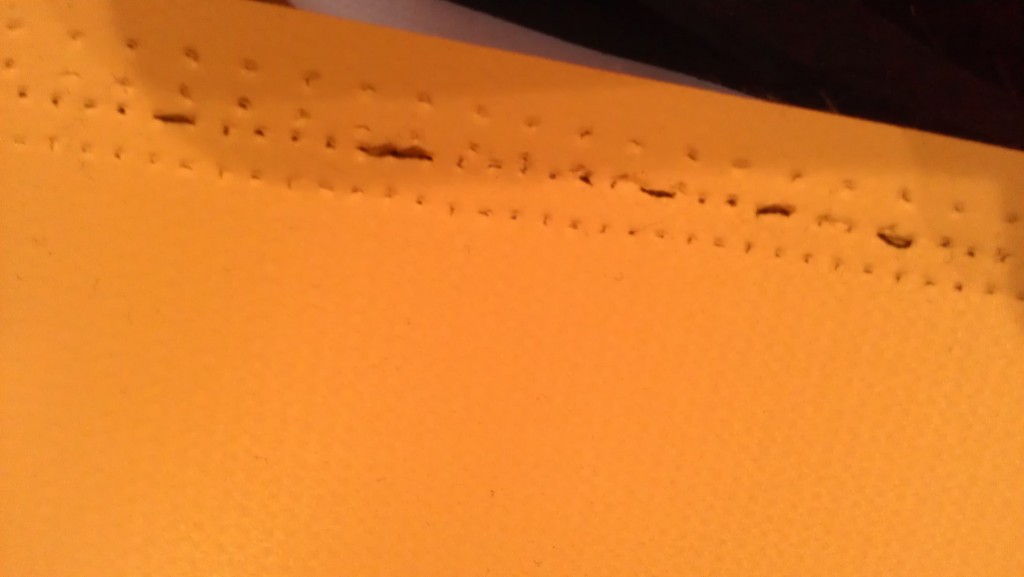 I wound up using a combination of two different black fabrics due to the high stretch and density of the knit I wanted to use for the sleeves. Sewing a curve on the super-stiff printed fabric was a tad awkward. 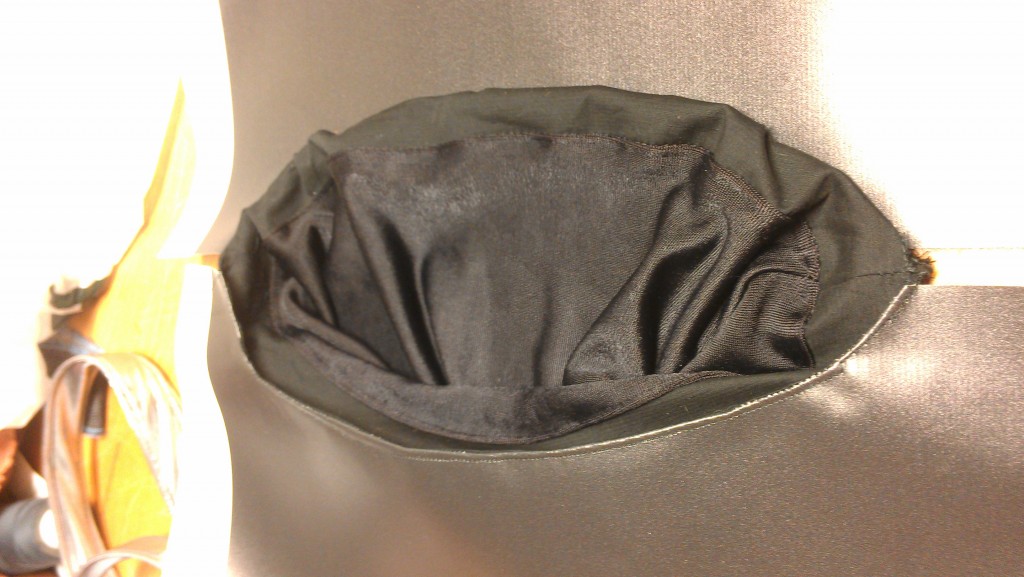 I taped the bag to the frame to test it before finishing off the top and bottom. In the background, you can see a triplet of Big Texes painted by local artist Ty Albright. Big Tex burned down this morning after 60 years of greeting fair-goers. :”-( 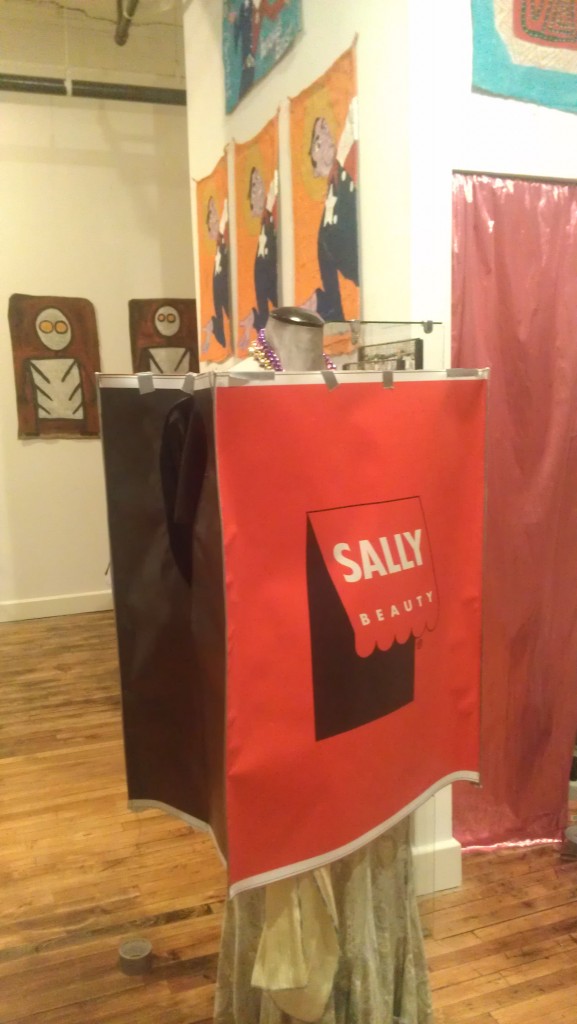 There is no arm movement to be had in this bag. I tried several yoga moves to see my phone screen while wearing the bag all the way, then had to pull one arm out, and it was still tricky. 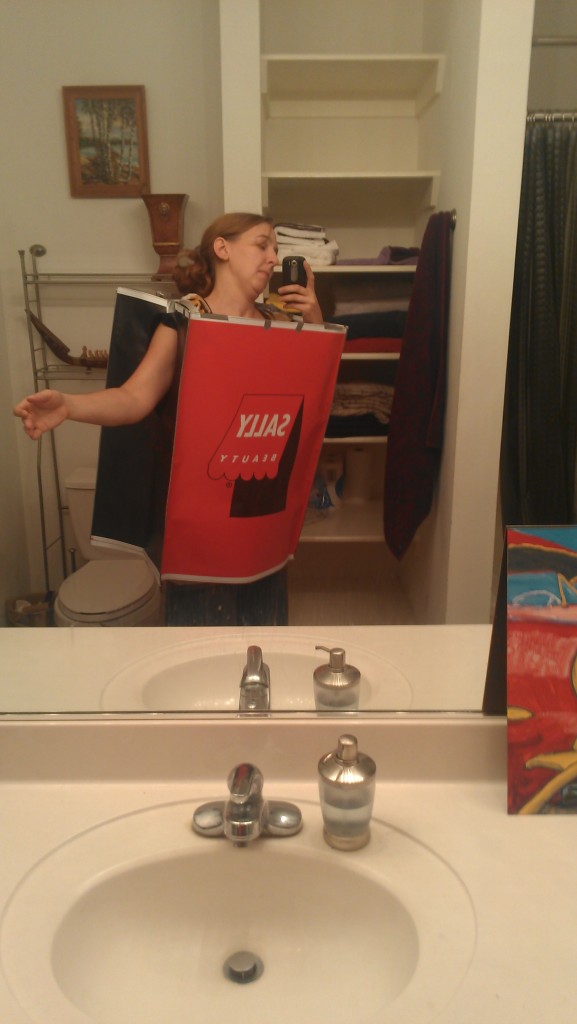 I put my machine up on a box to be able to get the bag around the base and keep it flat. 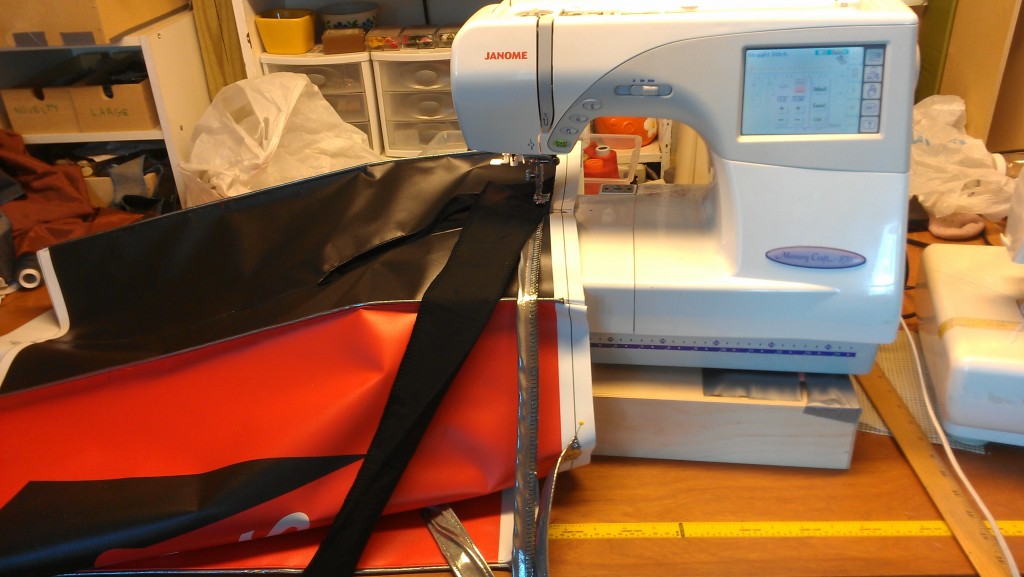 Attaching the bags to the frames: 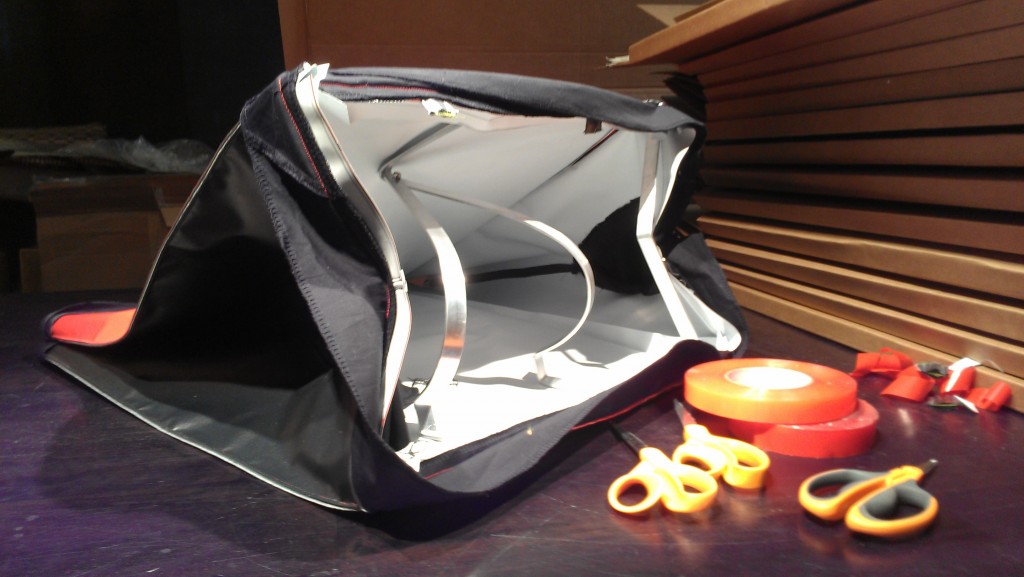 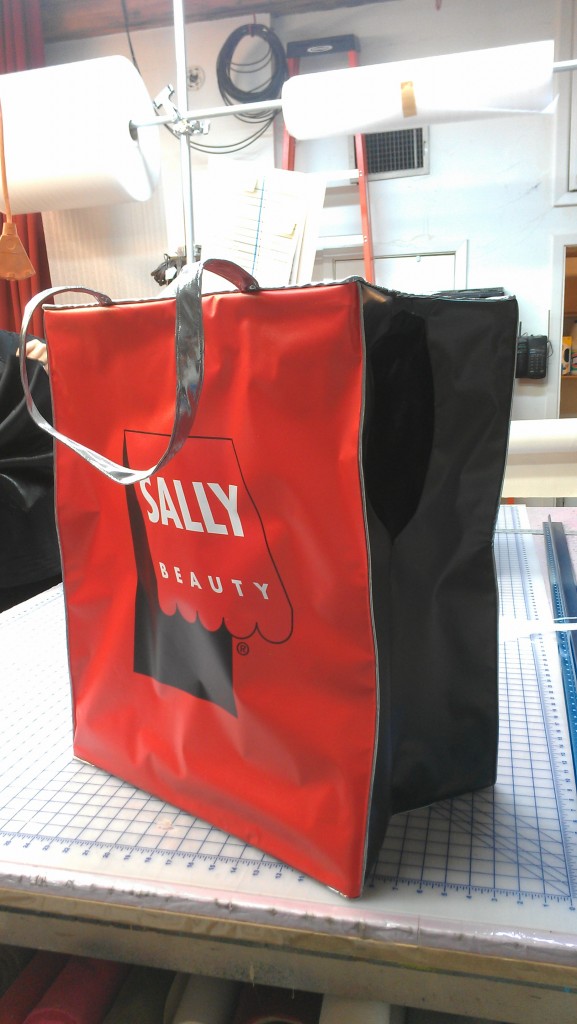 Carlos, Denise, and I had big plans of putting the bags on and running around in the parking lot for an impromptu photoshoot, but they finished their work before I got the frames attached.

I discovered after I had put it on the frame that I had forgotten to wire the handle of one of the bags, and had to thread it in afterward. Near-disaster averted!

Next, to work on the “tissue paper.” I tested a scrap, serging wire into the edge as I went, bending at the corners. 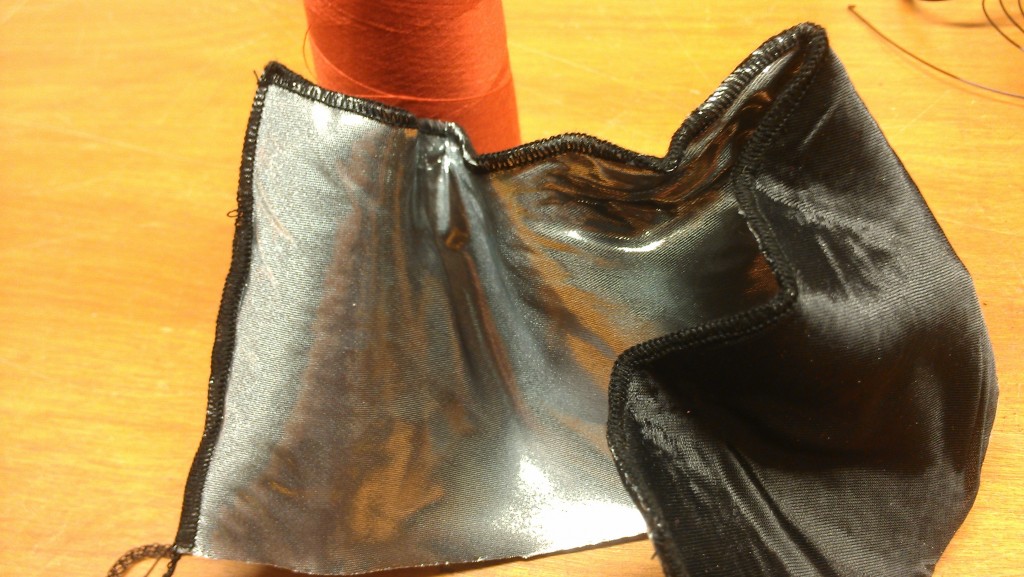 The edge came out looking too home-made, and that was as tight as the stitches would go. 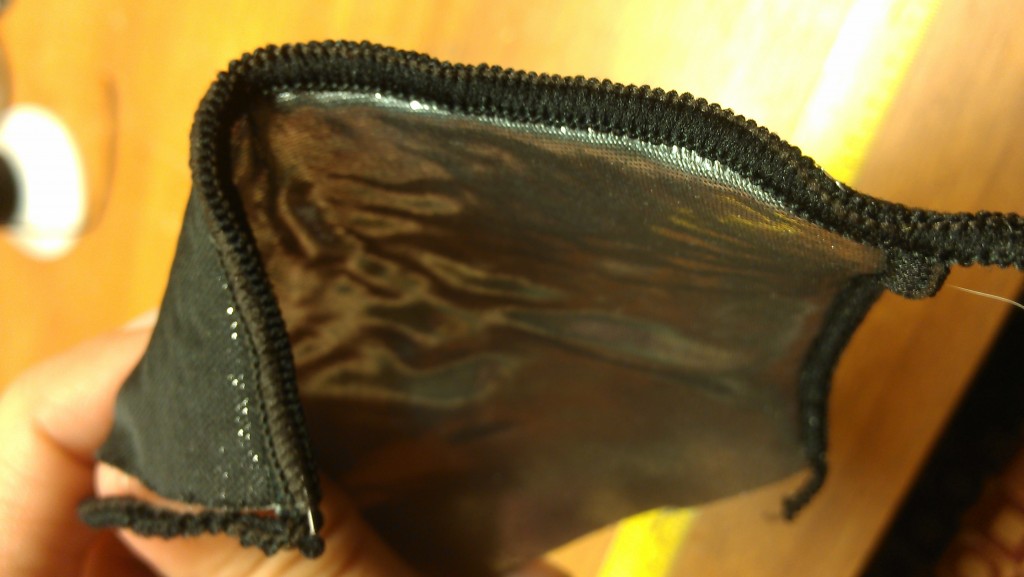 I quilt-basting sprayed a sandwich of fabric and packing material. 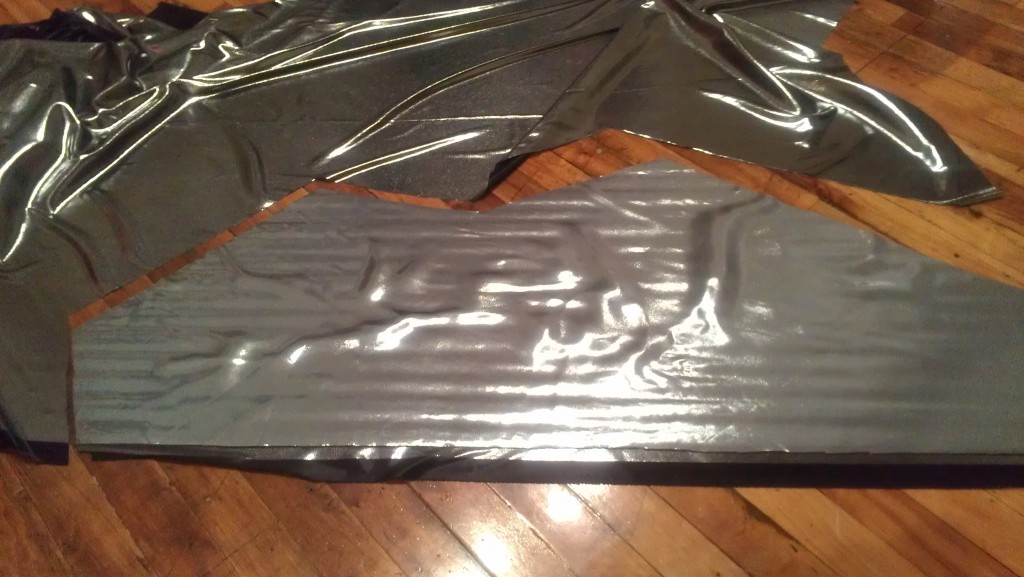 Once it was edged, all the spray-glued areas had to be pried apart so it wouldn’t look like that foil weather-protector stuff some people put up in their windows and leave up year-round.

I have any number of woolly nylon spools in various colors, but only these two black ones, and one of them was low. I kept one eye on it the whole time I was sewing, hoping I wouldn’t run out at 11 o’clock at night when Joann’s is closed and we’re supposed to be attaching them to the bags before the weekend. Wooly nylon is puffy, so there’s even less here than it would appear: 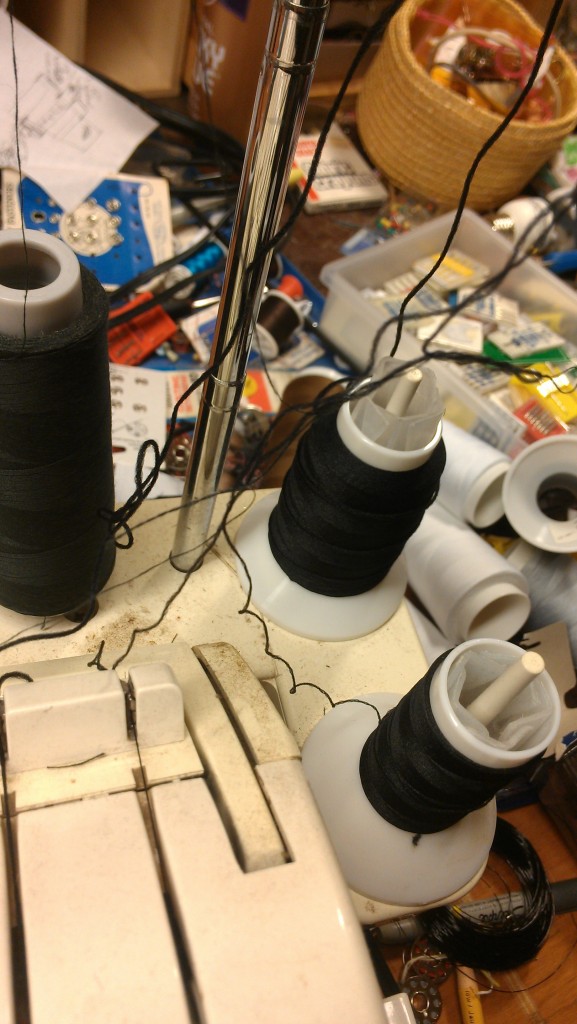 Testing the bags and one sprig of “tissue paper” with Melissa, in town from Austin: 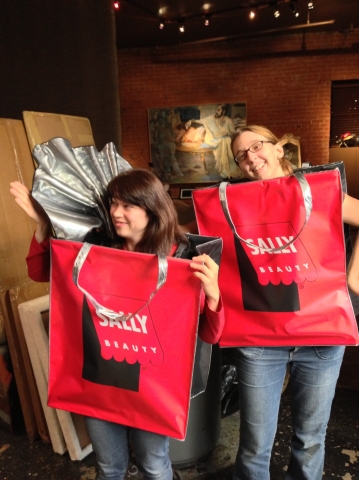 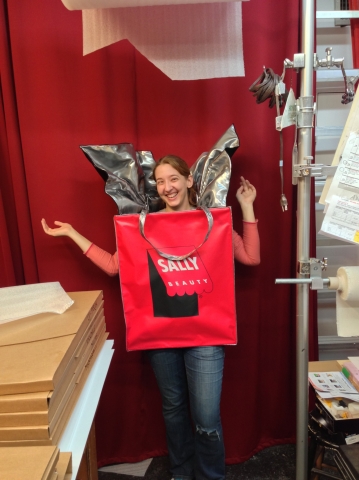 On second thought, the tissue paper turned out a little too high. We cut it more or less in half, then gave four short pieces to each bag instead of two big ones. My small spool of woolly nylon DID run out, with about 6 inches left to edge, so I wrapped it with some from the larger spool by hand. 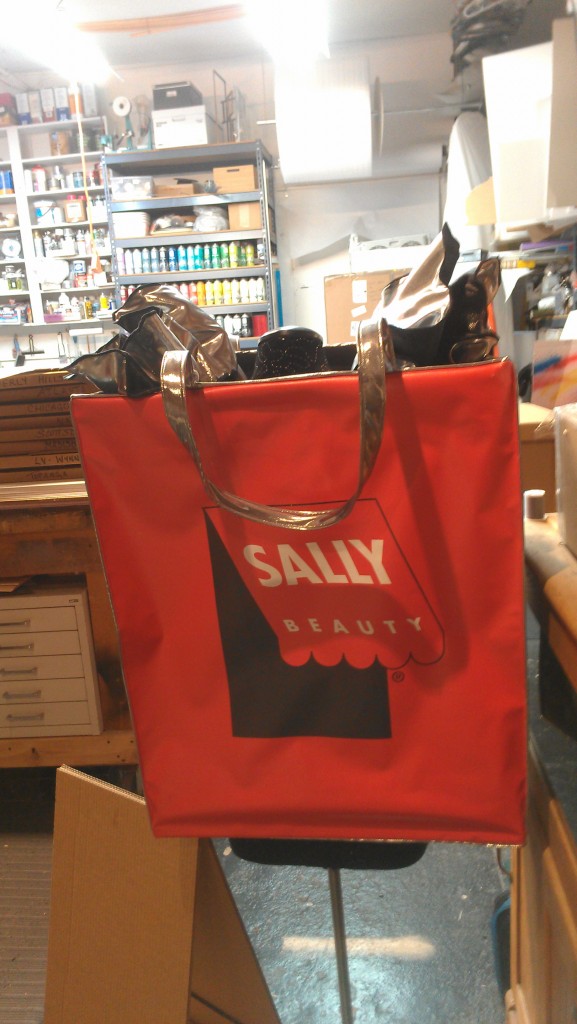 Everyone at the convention was thoroughly impressed with the outcome. Apparently, bag costumes had been done before, but printed on plastic sheets, making them look more like boxes; the arm holes had been cut wide enough to show the girls’ leotards, ruining the illusion of living bags that had sprouted limbs. People actually asked if we had used real Sally’s bags. A wardrobe malfunction would certainly have ensued from that. 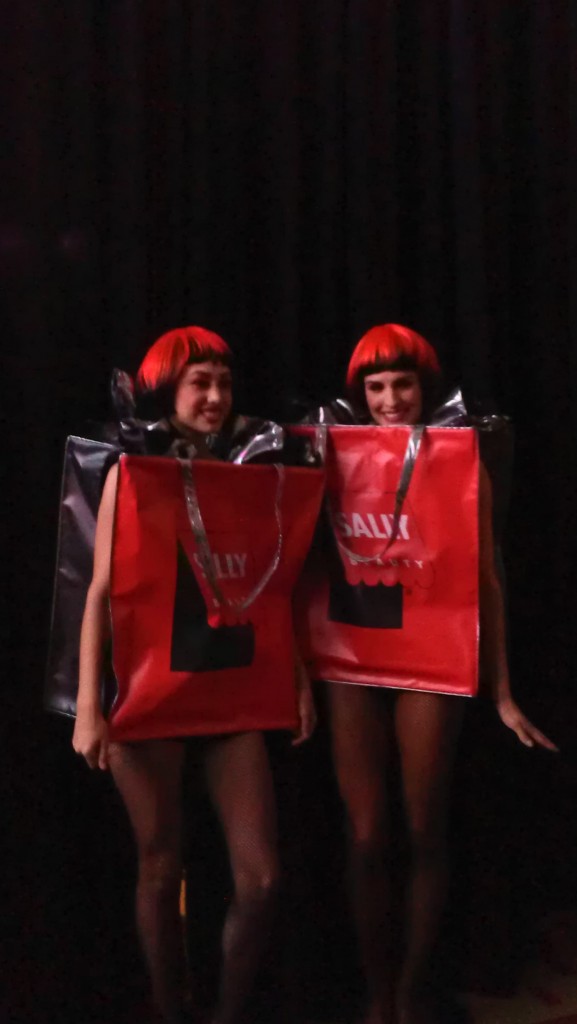 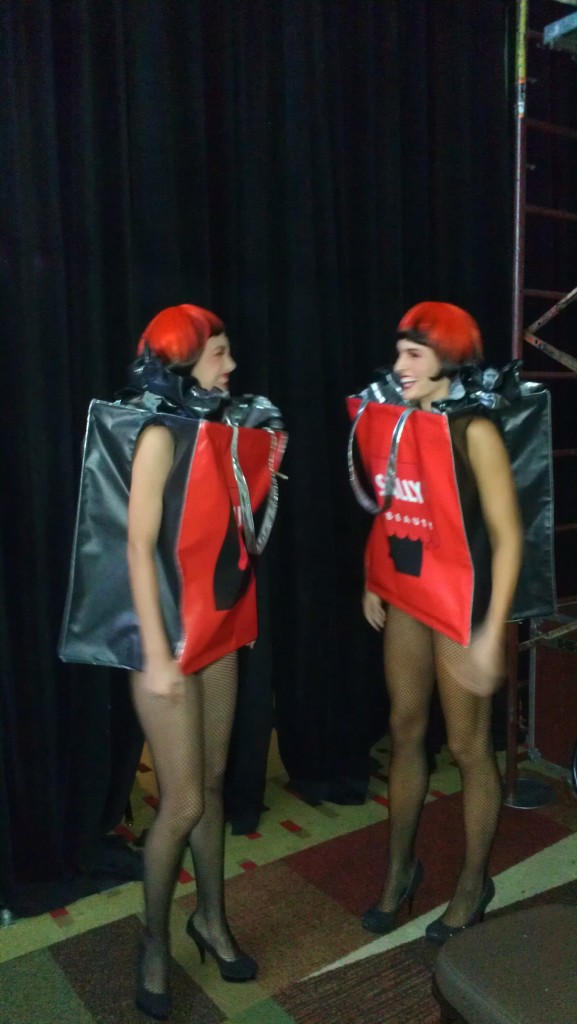