So I’ve been randomly tossing fabric up into my fabric storage area to get it out of the way, but it’s been pretty much impossible to find any specific thing. 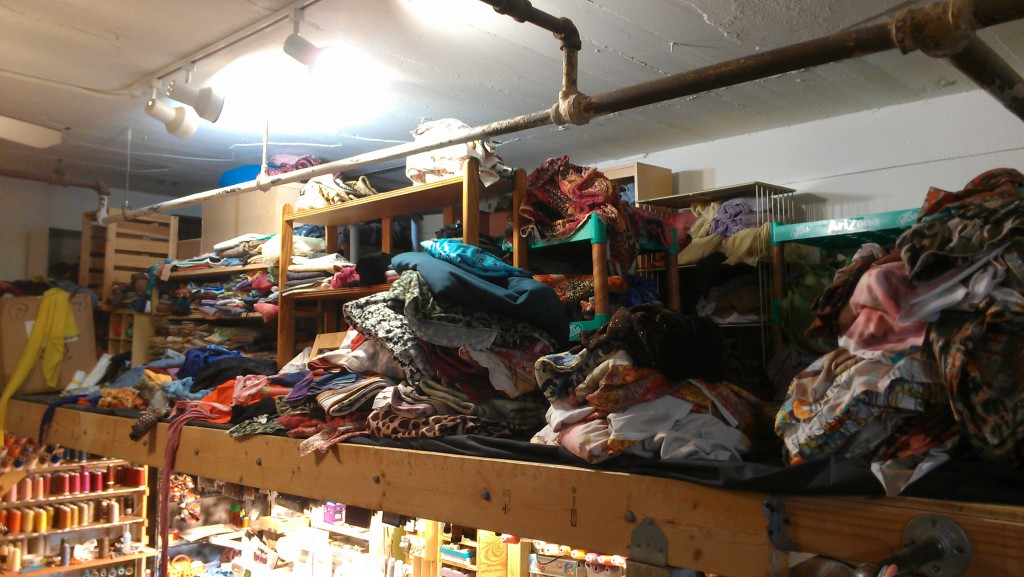 Looking down the pathway: 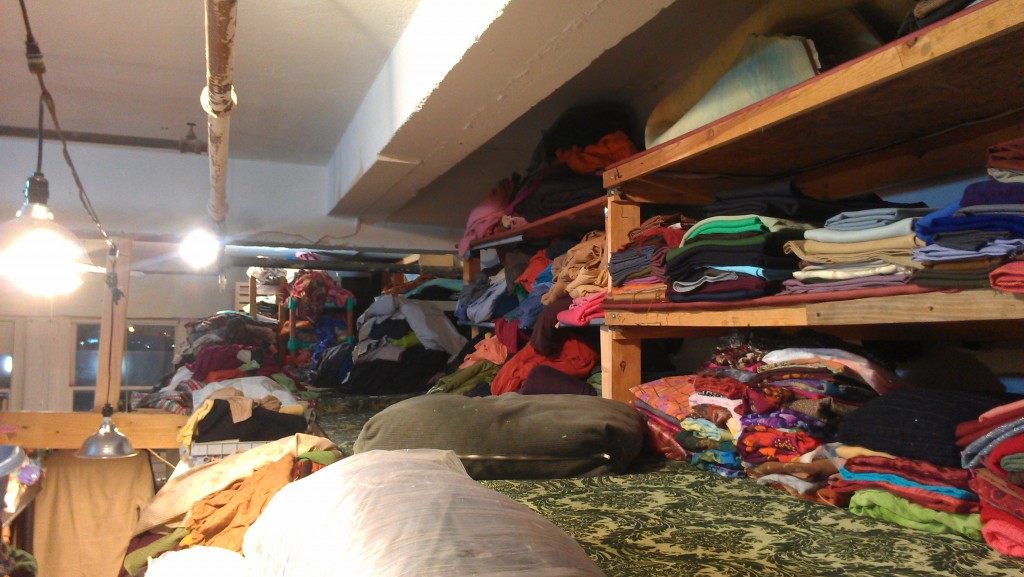 My roommate Candice brought in a cleaning organizing friend, also named Candice, to help me with sorting everything out. To the right of the above picture, you can see where she’s started.

I sorted all the fabrics by type and she folded. Most people who don’t deal with fabric–and even many who do–have a hard time figuring out how to fold large yardage or how to get it to fit onto specifically-sized shelves, so I was impressed when she knocked the whole thing out in a few days. Including slinkies, stretchies, and silkies. 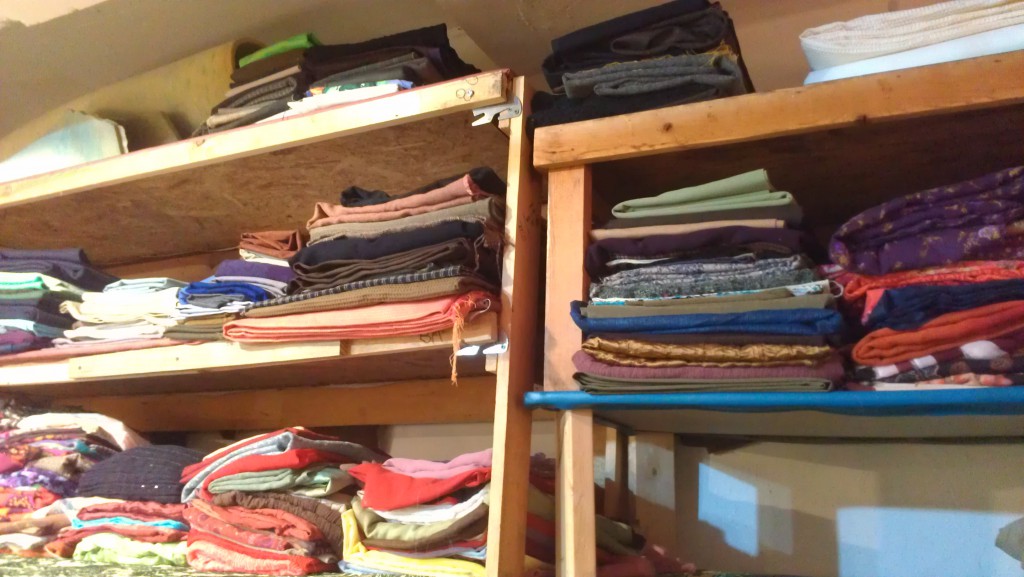 Now I can see how much room I have for more fabric! I’m going to win!

So here I am back after a long absence caused by various reasons, not the least of which is being fabulously busy. So the next several posts, submitted in rapid succession will show some of what I have been up to.

Here is my soon to be previous work table. It features some paint shelves, despite my not being a painter, and also despite the fact that the space provided here is barely enough to hold even the paint selection of a non-painter (which isn’t apparent in this picture as I remembered to snap this Before shot just before completely emptying all the paint into a milk crate). 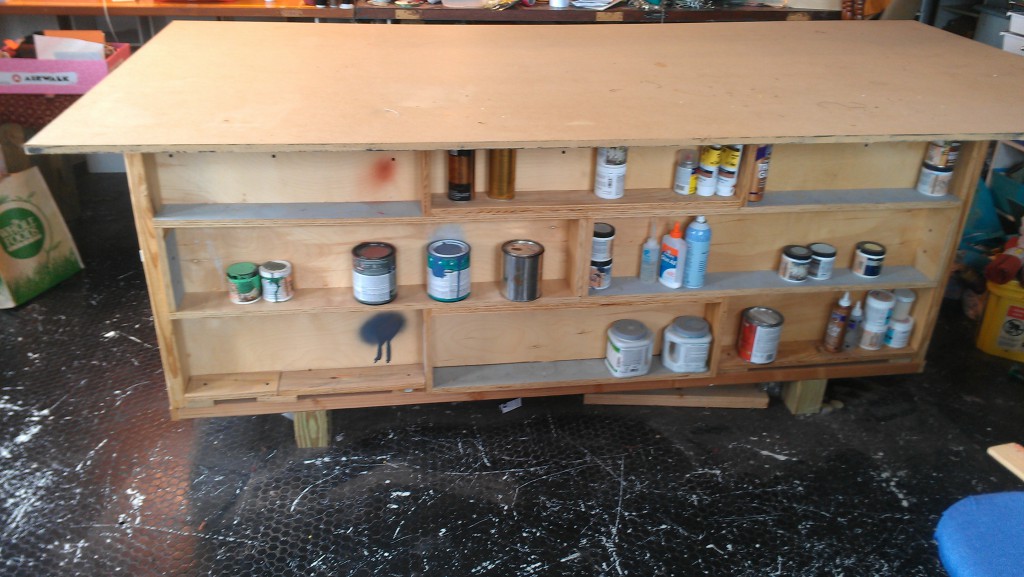 This table also featured shelves that were way too deep and too high on the other side, making it very hard for me to organize: 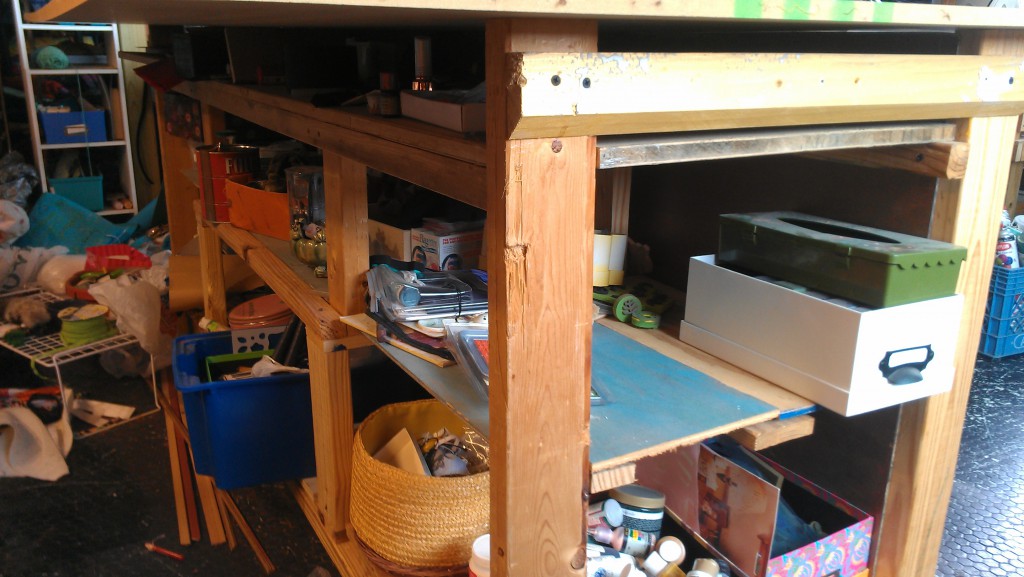 Shelves can be freaking cheap at thrift stores and they are readily available locally at places like Ikea and Target and what-have-you. However, I wanted specifically 36-inch high shelves that were fairly wide, but only about a foot deep. Apparently, this is not a common size.

An internet search turned up a decent selection online, and further inquiry turned up the cheapest to be found online. (http://www.hayneedle.com/)

The description almost led me to hope that they would come put together, but when 5 boxes of the size shown below arrived, I knew some assembly was required. 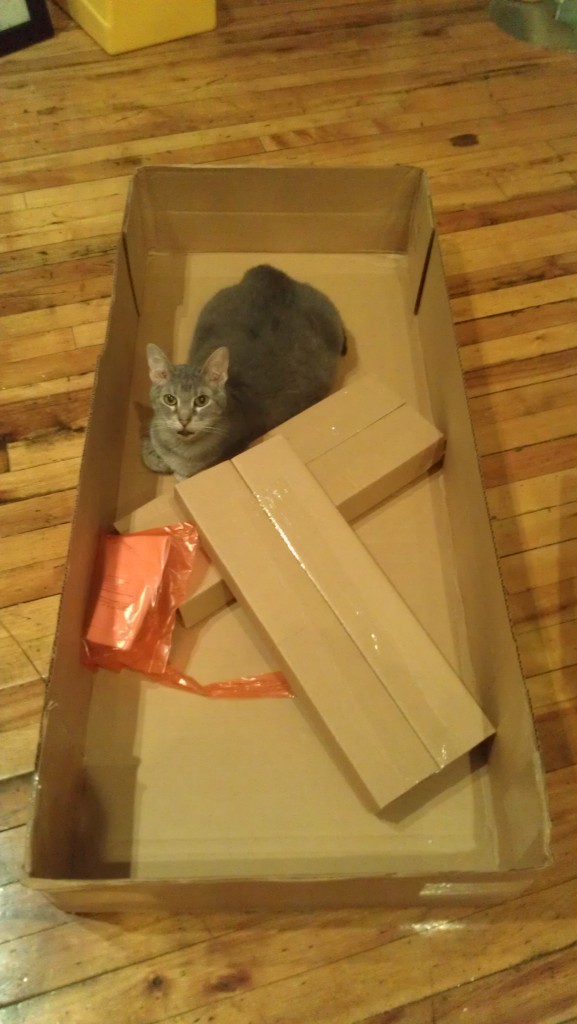 You know those little twist circles that cheap furniture always have? Well, maybe a quarter of the holes those go in had to be chiseled out. Which greatly increased the time it took to build these shelves. As well as the frustration and sense of tedium that is generally inspired by assembling this sort of furniture; the work vs. outcome ratio is akin to if it took 12 hours to prepare spaghetti. Their screw partners had to be screwed in tightly or loosely in various places so that the heads would line up, and it wasn’t apparent without screwing them in then testing, then adjusting. I wound up chiseling through the shelf in a couple places and not managing to complete the connection in a few more. In other words, I learned why these are hands down the cheapest shelves on the internet. I’m also getting email updates on office furniture deals pretty regularly now. 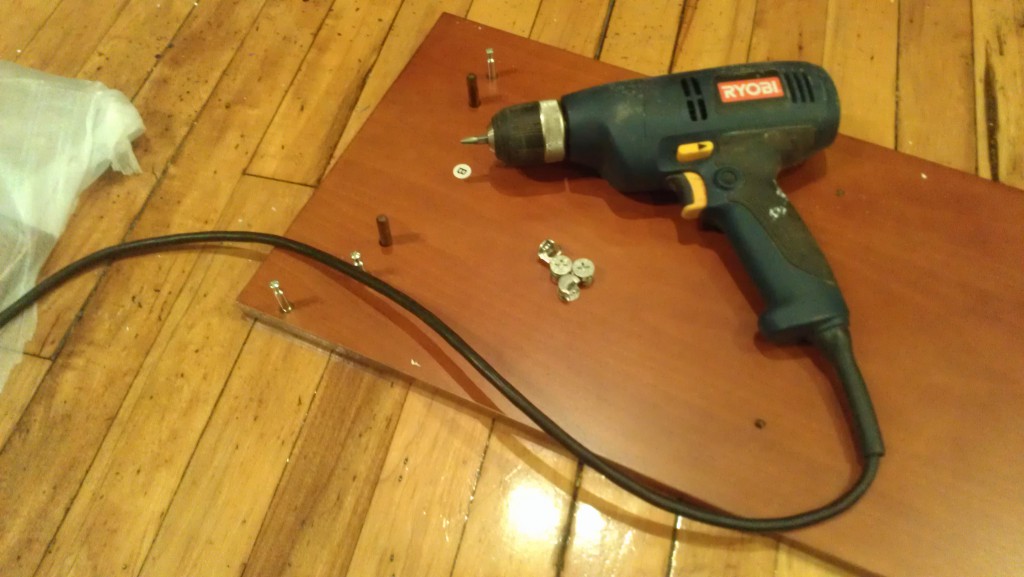 It took multiple sittings to manage to finish all of these, and about 3 or 4 trips down to the dumpster to get rid of the boxes and Styrofoam. So fast-forward ahead and here are 5 shelves waiting to go into my studio. 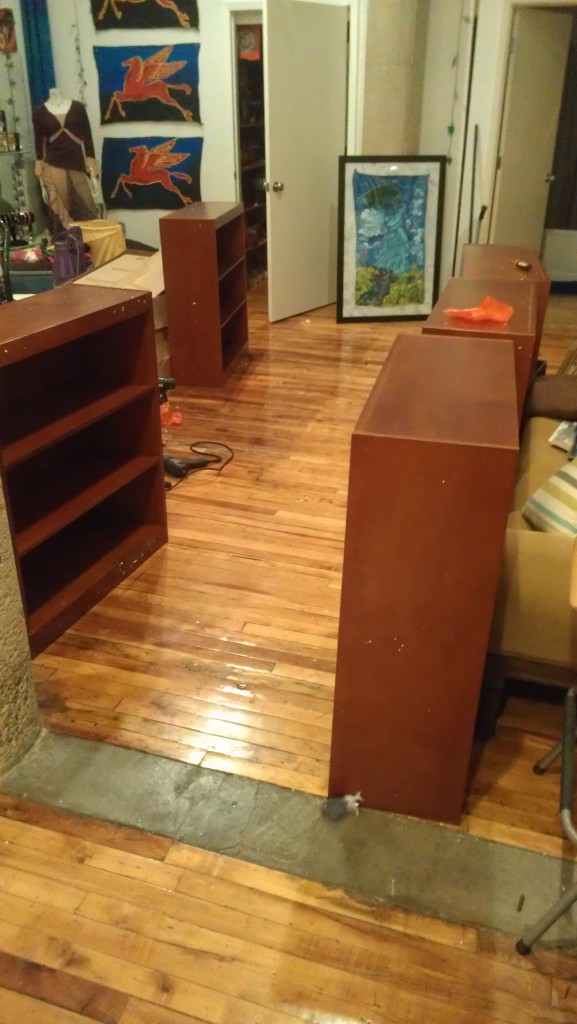 I discovered that much of the previous table had to be dismantled by pounding the crap out of it with a hammer and ripping the boards apart with my mighty thews. It took me back to that throw-away joke in Maniac Mansion about how the hamster cage was nailed, bolted, taped, and glued down. (Something like that; I can’t find the exact quote online, and I don’t want to download and play the whole game from scratch again just to get it right for those two people over the next decade who not only read this blog but also know what the heck I’m talking about. Unless you happen to know, please comment. Not knowing this occasionally drives me crazy.) 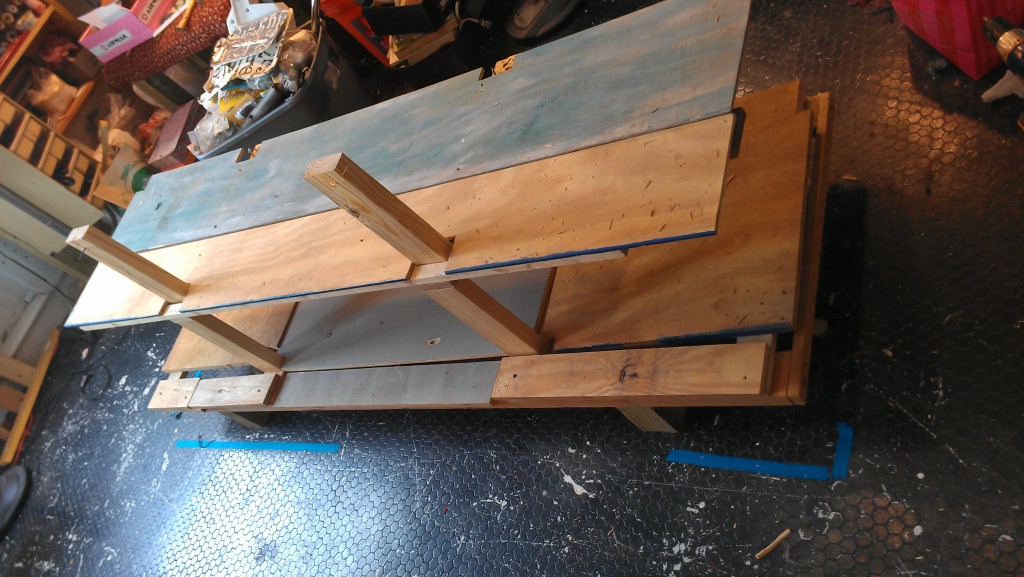 Also, I did not build this table myself, nor, apparently, have any say whatsoever in its construction.

On to the new table base, still covered in Styrofoam bits: 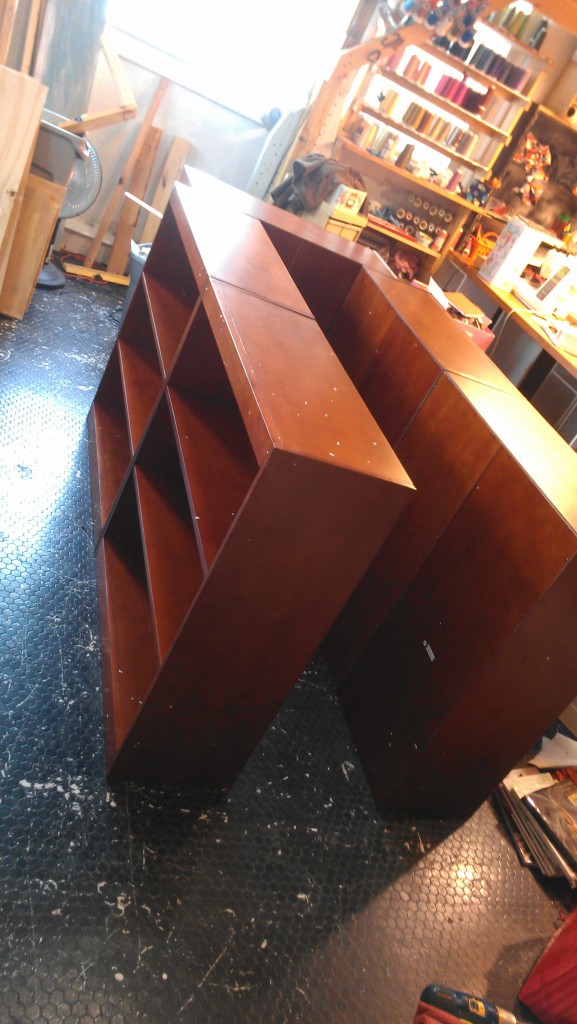 The following step was difficult. The sheet of MDF is outrageously heavy, and the shelves are pretty light and are easily knocked over. 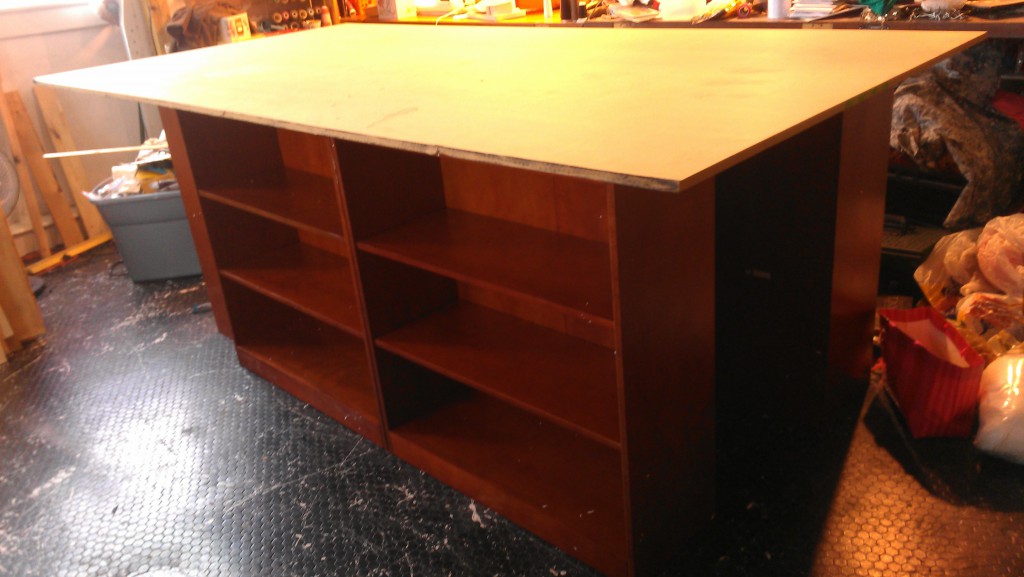 Here are some shots from my old sewing studio at the Continental Gin building (which used to manufacture cotton gins). It was the corner space on the 3rd floor, and it was the only one that came with a built-in loft. Since then, I will not studio out of anywhere that I can’t build up.

The bricks are so old that every time a mouse sneezes, you can hear the skitter skitter of dust crumbling down all over your stuff.

I had just bought two rolls of these plastic sheets and was going through the process of putting it up everywhere behind all the existing stuff when I got the opportunity to move into my current space.

The reason the plastic looks like crap was because as I was installing it, this whole space was filled with shelves and piles of fabric. Also, it looks like crap because it’s plastic and it has to cover some really cool-looking bricks.

It was impossible to keep it not-filthy, though. This was after I pulled everything out of the closet and actually swept. From this photo, it looks like an abandoned building you’d find squatters in. Yup, that’s swept:

The roof of this place slopes in two directions, so my studio was actually the one in the building with the highest ceiling, and nearly the only one of its size with three windows. Which meant that at certain times of day, I would be blinded for several hours while trying to sew.

When I first moved in, the halls in my area were burgundy, and a nearby wall was yellow with windows made from glass doors whose trim was painted red. It was very bright and creative, which worked well, I thought, for an artist space. Eventually, everything was painted a nice, tedious shade of white for some reason. My studio was the only one that came with walls that weren’t white, not to mention floor.

As I work on rearranging, organizing, and decorating my studio, here is a shot of what it looked like before there was anything in it but me. 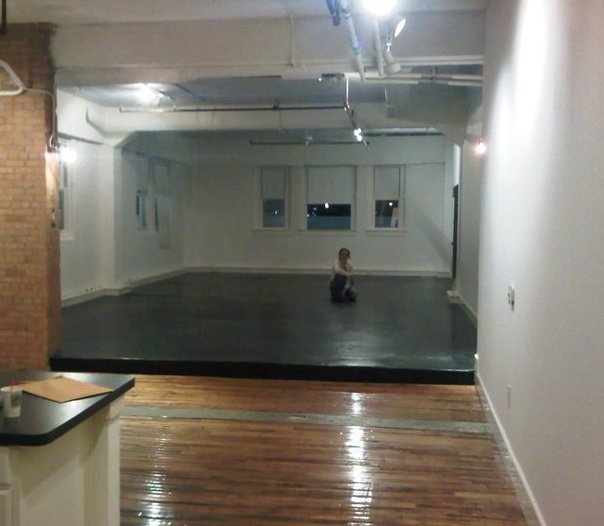