The project: a butterfly made of rose petals that will float in place on water

The original intention was to make it from pale yellow petals, but that would have required ripping the glued and damaged petals off of more stem-roses than we had access to–as well as spending $5-$7 per rose. There are boxes of any number of colors of fake rose petals online, but as always with photoshoot props, there wasn’t time to order them. From a frantic interwebs search, the only local place I could find that sold rose petals by the box was Hobby Lobby. ::start very, very short rant:: Why, why, why, why are Hobby Lobbies all out in the suburbs?? #end rant.

Anyway, so after a handful of vaguely informative phone calls to Hobby Lobby, during which we are informed that the quantity of petals per box is “plenty,” I drive out there and see in person the recent change in dye lot.

The ones on the right looked more like the inside of a plastic seashell, so we went with the ones on the left, which look almost red when not next to the blood-red petals available in the store. Also, we didn’t go with dark purple. There weren’t a lot of natural-looking shades available, and the eventual plan for this prop was sending it to France where the crew would obtain real local roses of the same color, gut them for petals, and sprinkle them on top of our creation. Which is why Plan A had involved yellow roses, as those are apparently readily available in France.

Here is why I usually try to avoid going into places like Hobby Lobby: their nearly perpetual 50% off glass sales. Not good for a glass addict. At one point, inspired by a series of moves, I thought I had broken myself of it . . . but apparently all that meant was that I had to start over.  # rescind rant, I guess. 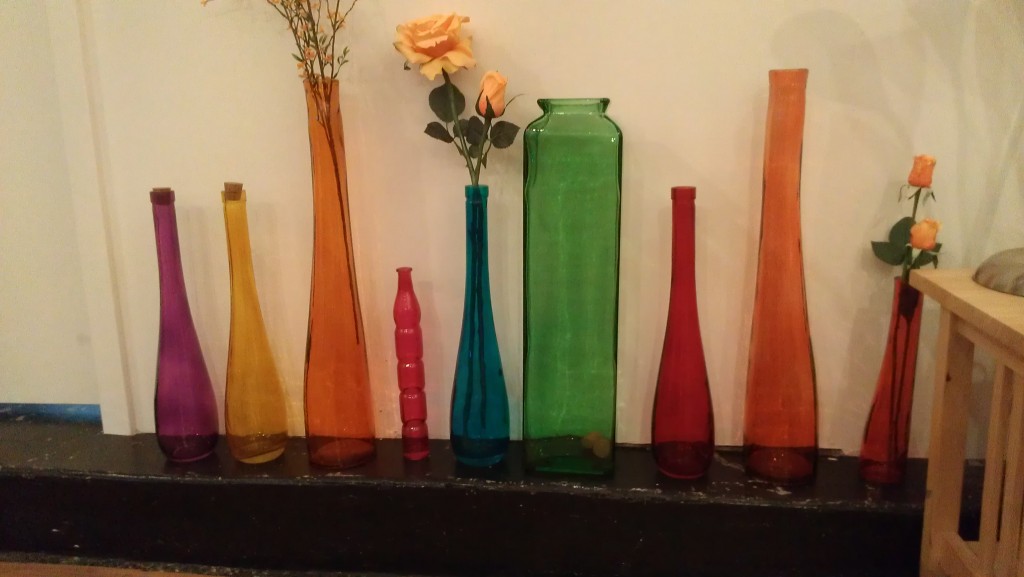 First we glued the petals to a net in the shape of a butterfly: 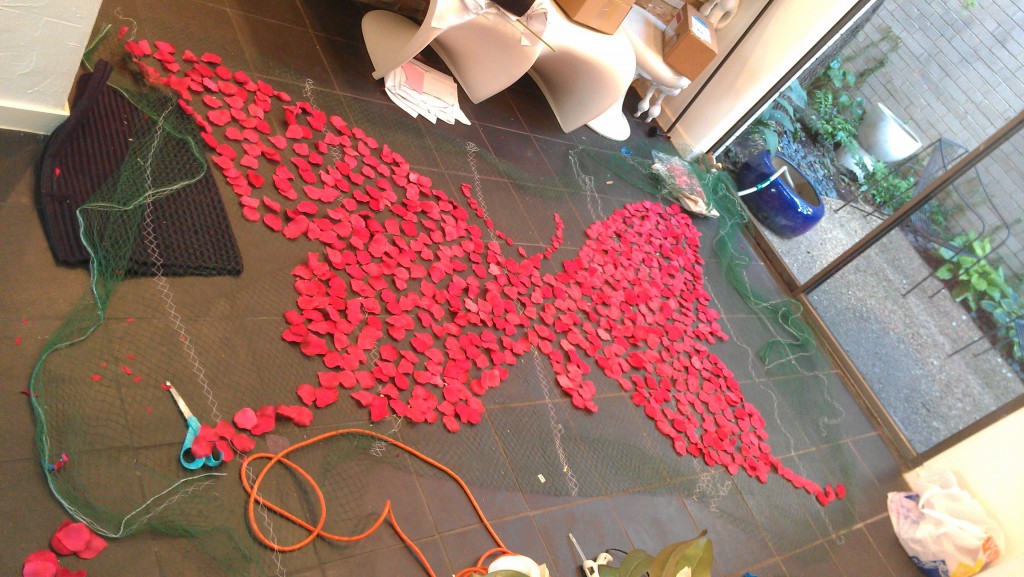 Wait, no, second we glued petals in the shape of a butterfly. First we sorted out all the shiny, almost metallic rose petals unless they had one matte side, and we sorted out all the organza “petals” whose presence in a box of fake rose petals would have given the random spreading of these at a party, wedding, or other such event an air of tackiness I’m not sure most people who spread rose petals decoratively are intending.

Then we cut squares of foam (there IS a use for that weird, ugly craft foam they came out with about 6ish years ago!) and glued them to the back, as fake rose petals absorb more water than real petals, and would then be weighed down.

Starting in the lower right corner: 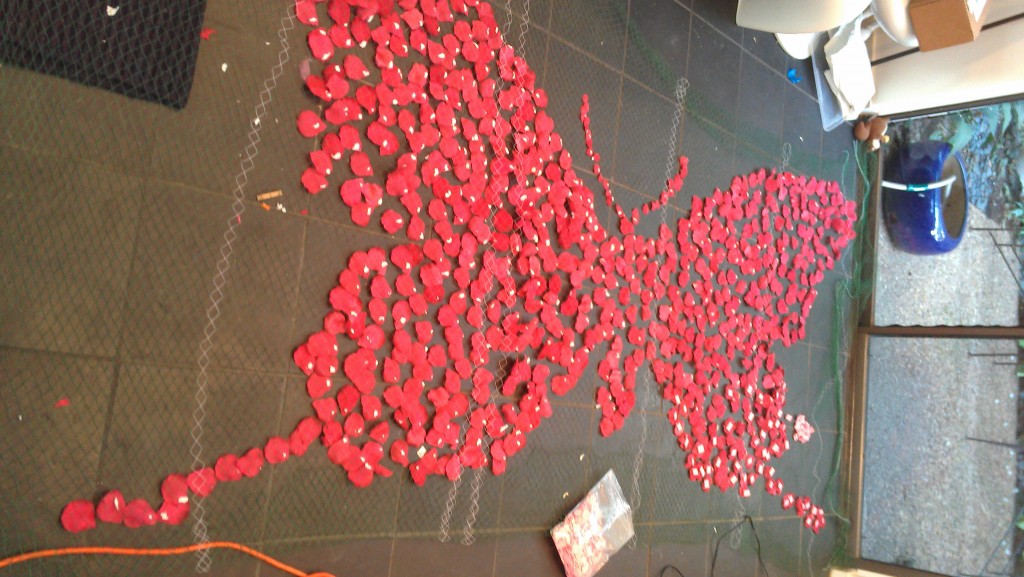 When artists, writers, creative people, etc. are going on about the process of creating with more tediousness than they actually experienced even in the tediousest part of the tediousest project, I often think of what my professor told me about the three times involved in writing a novel: story time, reader time, and writer time. Story time is how much time passes for your characters in your book, reader time is how long it takes your audience to read it, and writer time is how long it took you to write it. Of these three times, only the first two matter to anyone besides you, or are interesting in the slightest.

That said, I’m going to imply in a thousand words how many foam squares were put on all those rose petals, and leave it at that: 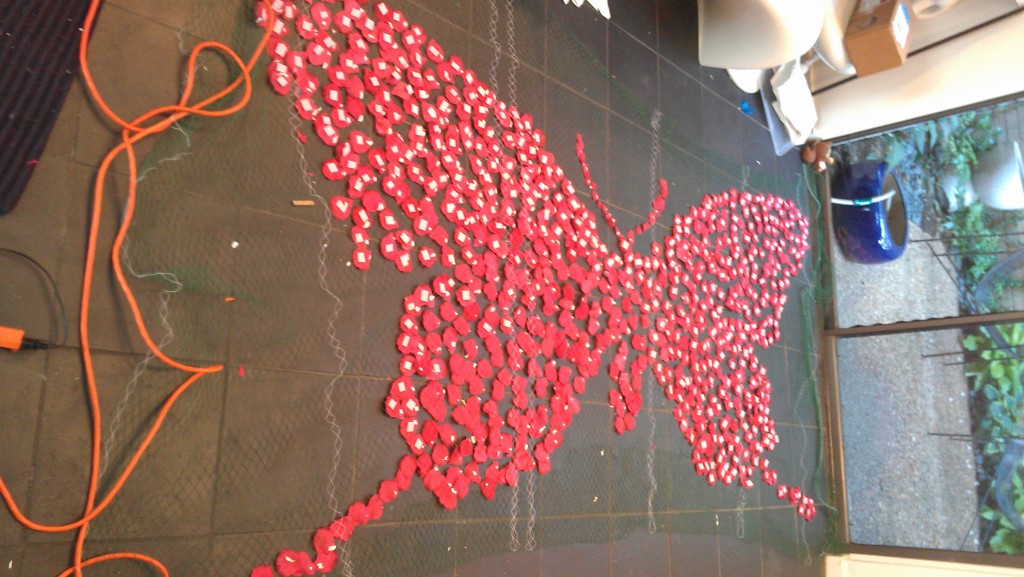 A small sample had been tested in a sink before beginning this 7-foot wide butterfly, but would the butterfly hold its shape in water? 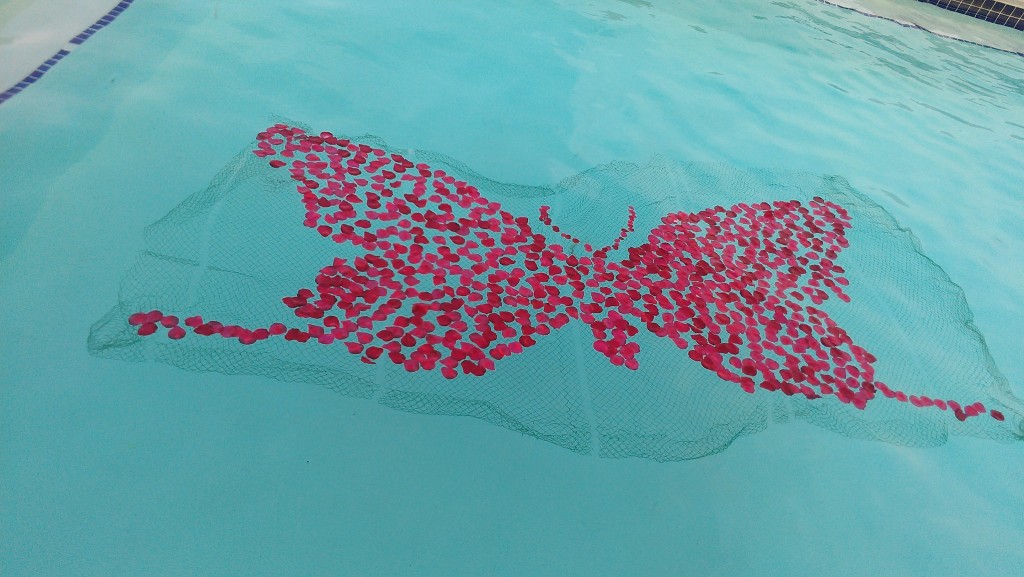 I expected that, being out of season, the pool on my roof would be empty. Or, rather, I hoped it would. I went to the least populated corner to test it. A few people started edging closer, apparently unconsciously, and a small girl headed my way to stare at it, so I got out of there before playful pool users damaged a visual-only, expensive, time-consuming piece one day before it had to be on a plane to France. 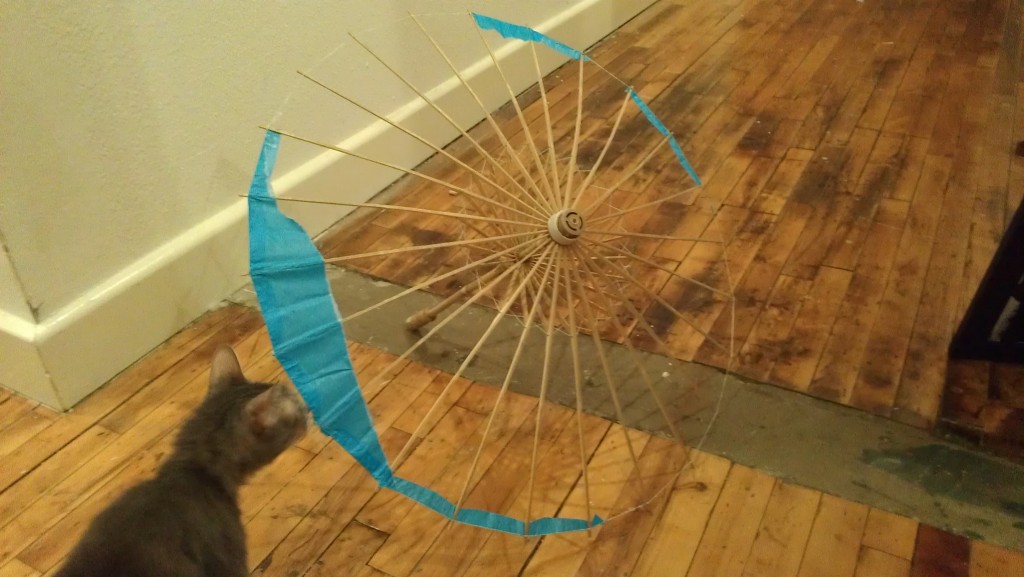 Start with ripping all the tissue paper off. I had first thought to use Fabri-Tac, but was told 3-in-1 would dry faster. It did indeed dry faster, which was very helpful, though it was rather like using melted mozzarella cheese that had been run through a spider.

After I had finished about 3/4 of it, I realized a better technique that would have allowed me to better attach the fabric along the entirety of each spoke, but this being a photoshoot, the final product was more than adequate. 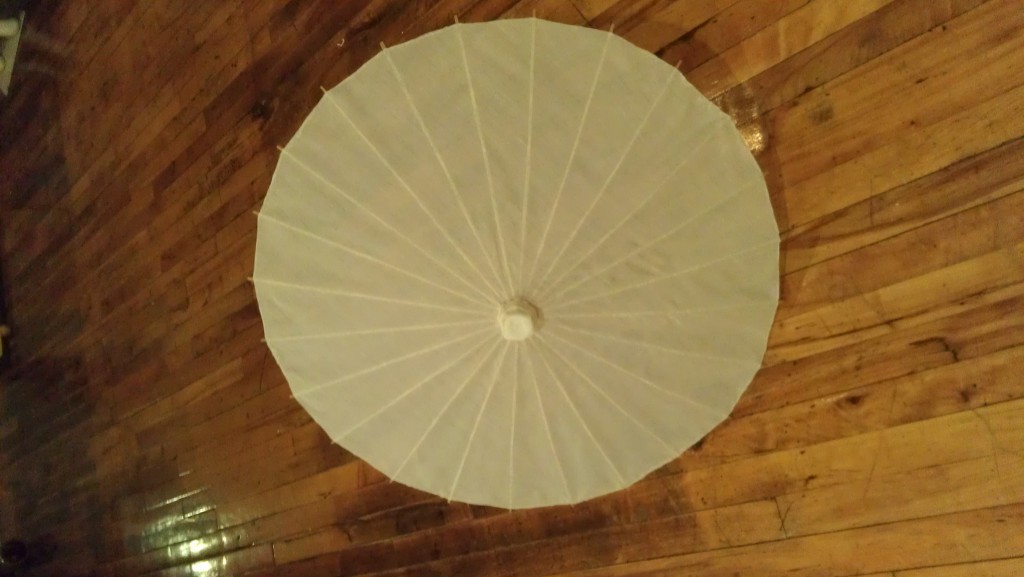 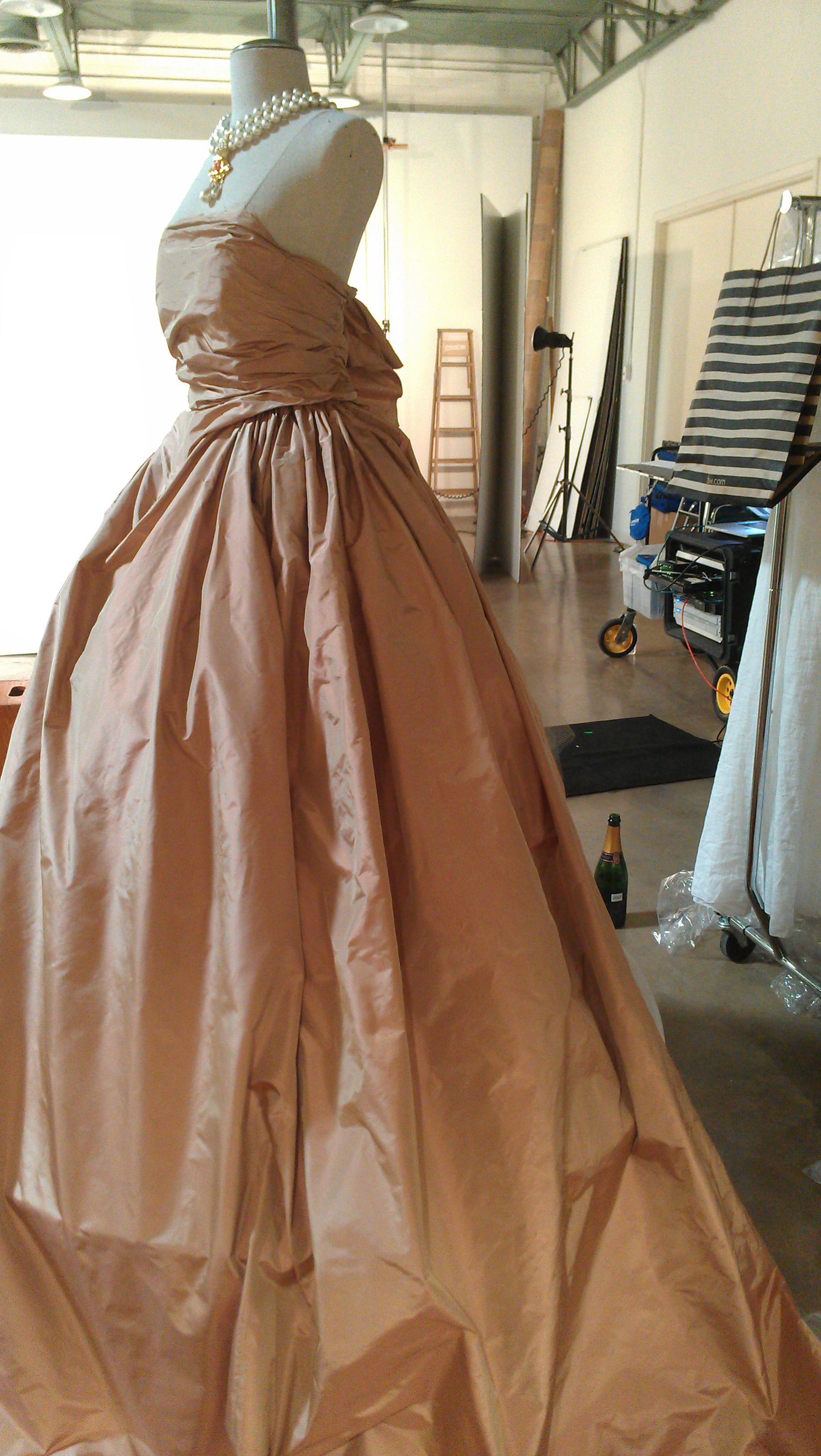 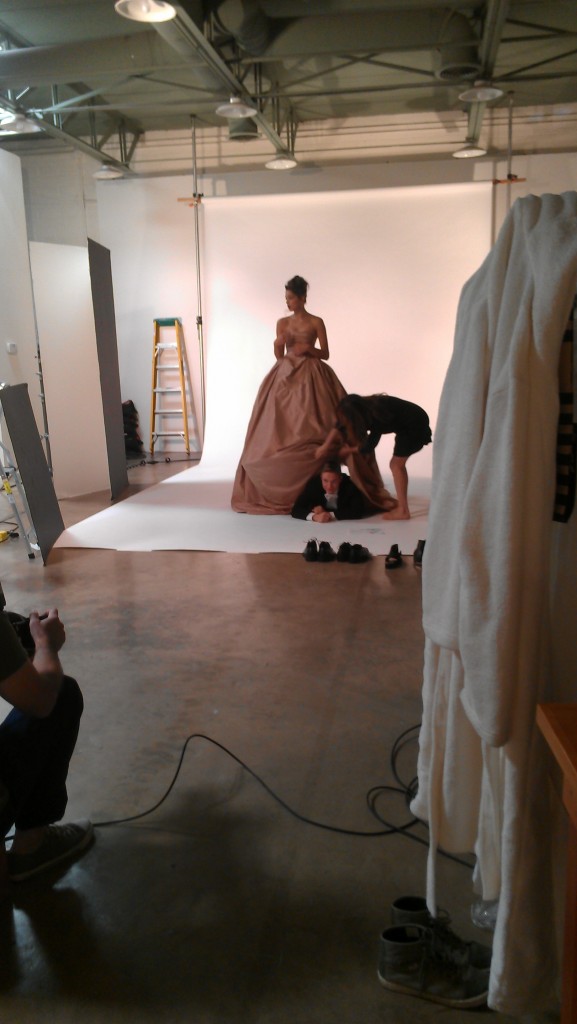 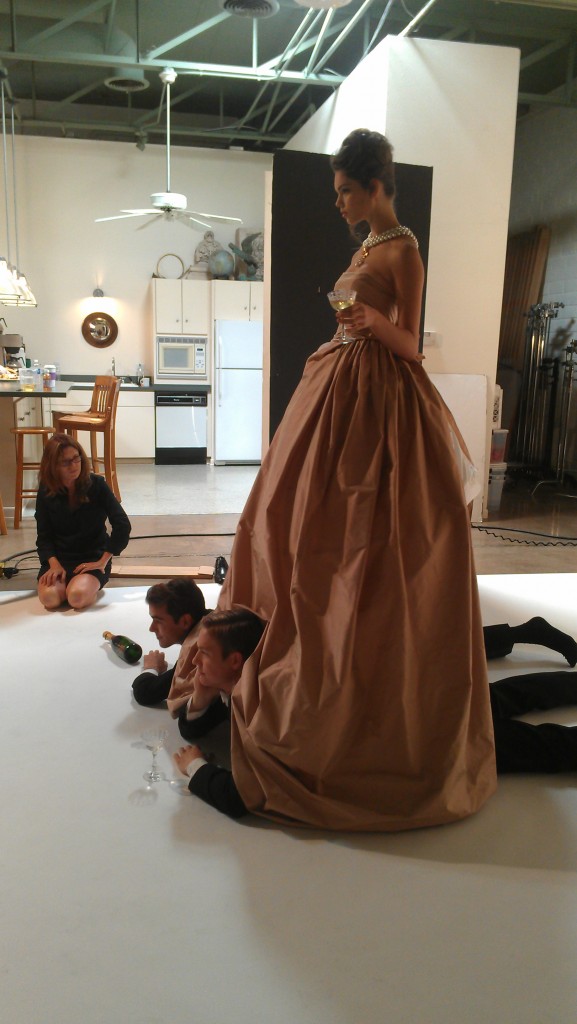 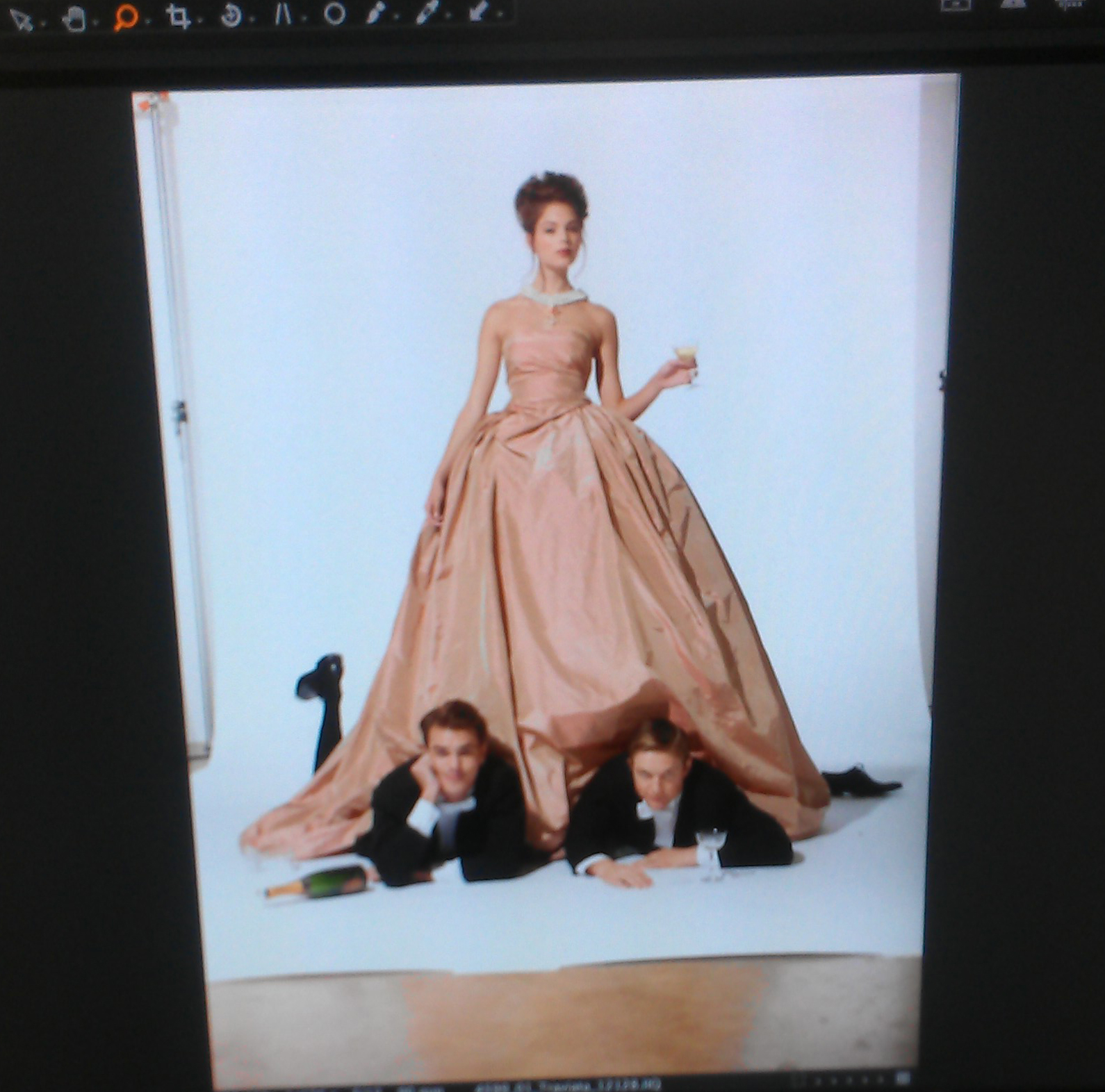