The Project: copy an airline headrest, then sew 9 of them for a photoshoot

So here’s the sample: 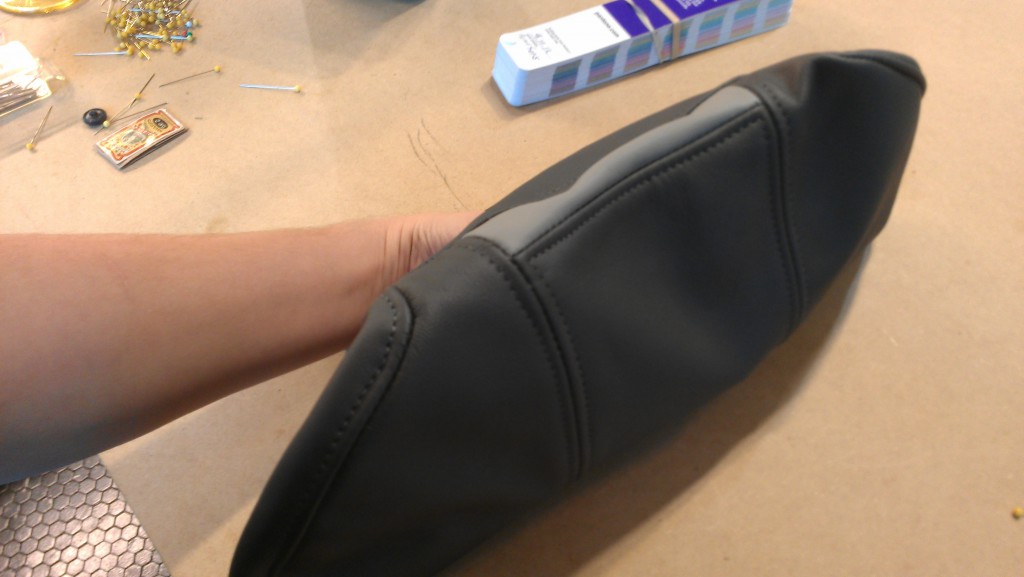 The thing is, it needs to be done in charcoal grey vinyl/leather, with the light grey strip redone as burgundy, and it has to be copied without taking the original apart.

Day one was about locating the fabric locally. It can surely be ordered online, but that doesn’t do any good when there is about 3 days lead time. Hancock Fabrics tends to have random colors of vinyls on their scrap pile. 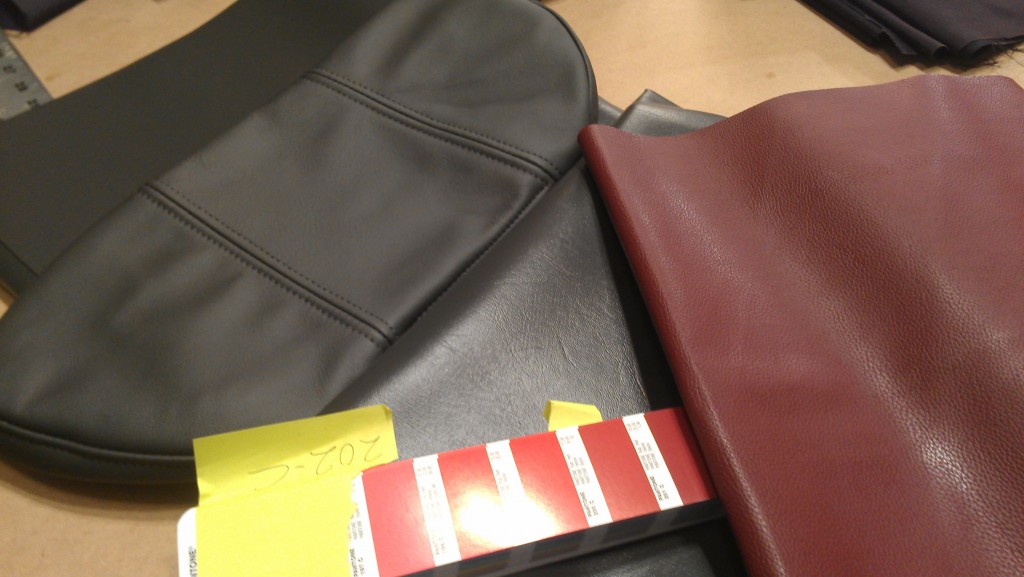 I managed to find a roll of grey in nearly the same shade, albeit a bit shinier. There was a single piece of burgundy vinyl in the store, a scrap that was about a foot wide. Other than that, there was red or purpley maroons.

Day two involved making a pattern and a prototype, then waiting for the go-ahead. The headrest is so 3D and has so many curves that I couldn’t pin it to paper to make the pattern. 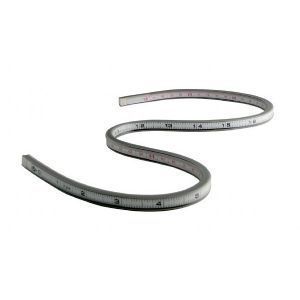 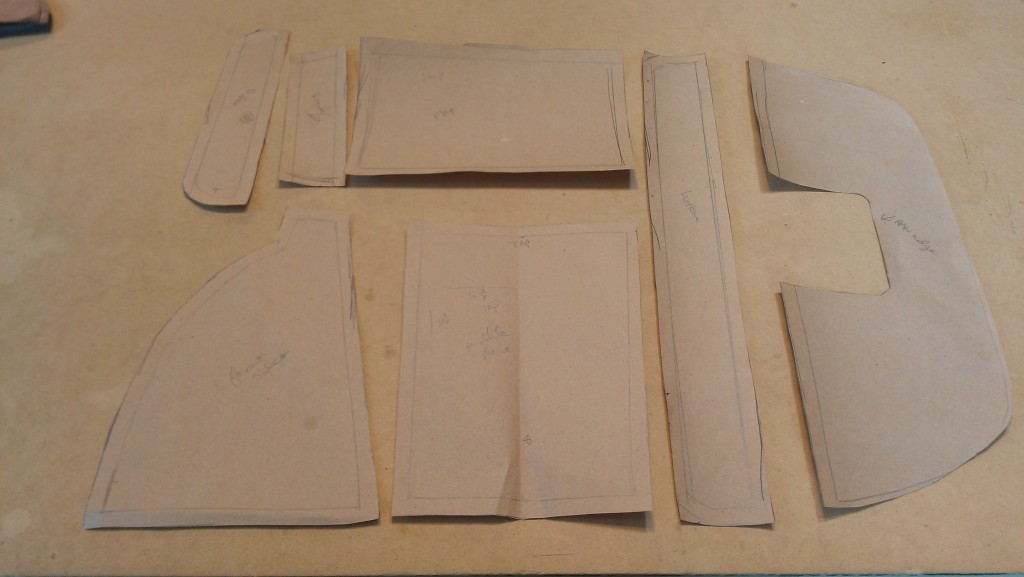 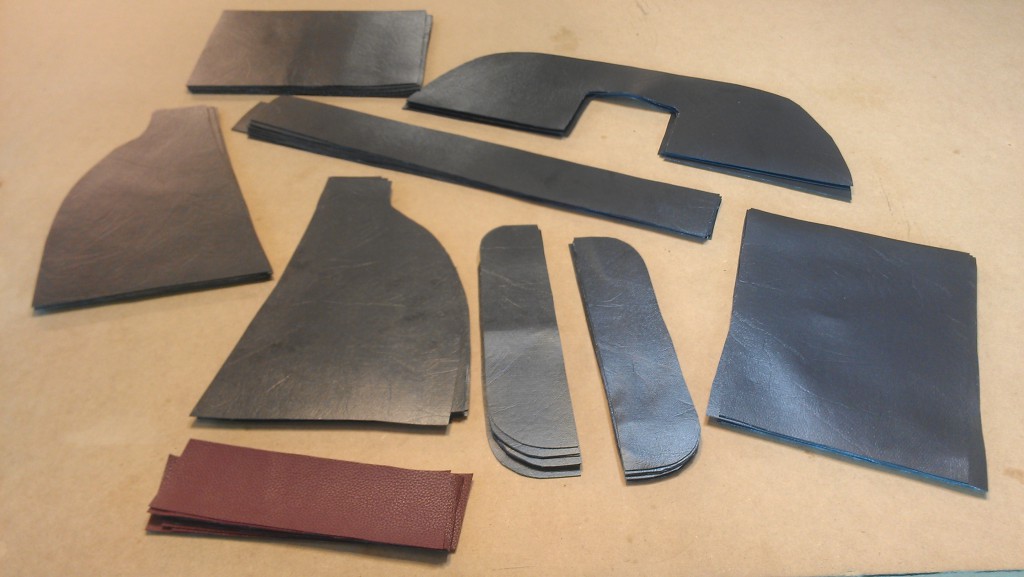 Things like this are generally made by car upholsterers using specialty machines. There are machines that sew with those extra thick threads you see topstitched on either side of most seams. If you try to use that weight of thread with a home sewing machine, you’ll get a few stitches in and then have to stop and take your machine to a mechanic to be realigned. Or get the timing adjusted–whichever way you want to say it. Even hand quilting thread can foul up a sewing machine’s timing.

The reason for this is that as the top thread is swung around the bobbin case, it goes through a tight area. I’ll give you these visuals and let you figure out the final condition of the things involved in this process: 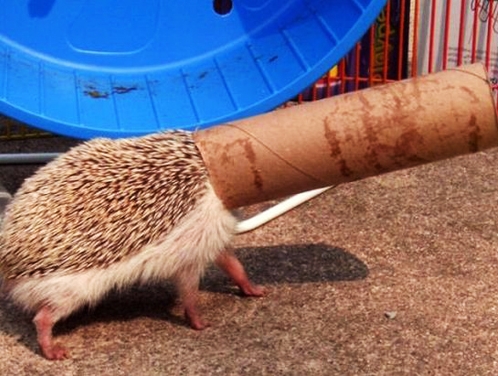 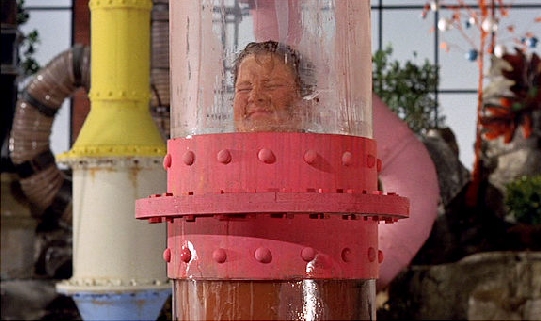 The way for a home-sewer to fake the look of heavy-duty thread is to run two threads through the same needle; they come out doubly-thick, but they have enough give to slip around the bobbin without damaging anything, machine-wise.

And I managed to get 4 hyphens in that last sentence. Talk about squeezing a lot of something into a small space!

I couldn’t locate more than one dark grey spool of thread and didn’t have the time to look for more or run out and buy it, so I stuck a nearly-empty small spool on the bobbin winder and rolled myself a second spool. 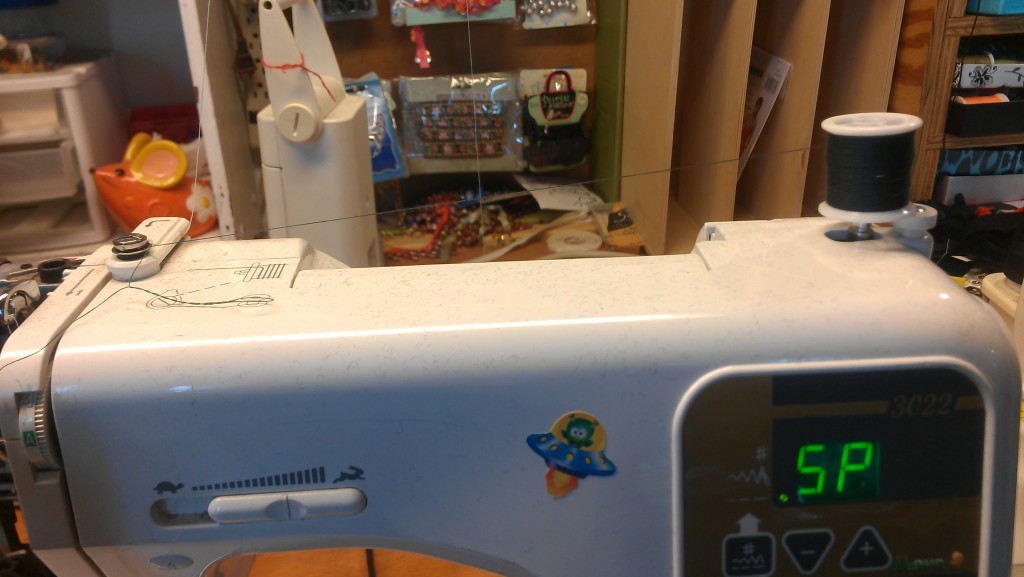 Getting the curves right and topstitching over lumps on a very stiff fabric is not what home sewing machines are designed to do. Have you seen Kinky Boots? While the main character did not approve of burgundy, they did have the machines that would have made sewing this a snap. 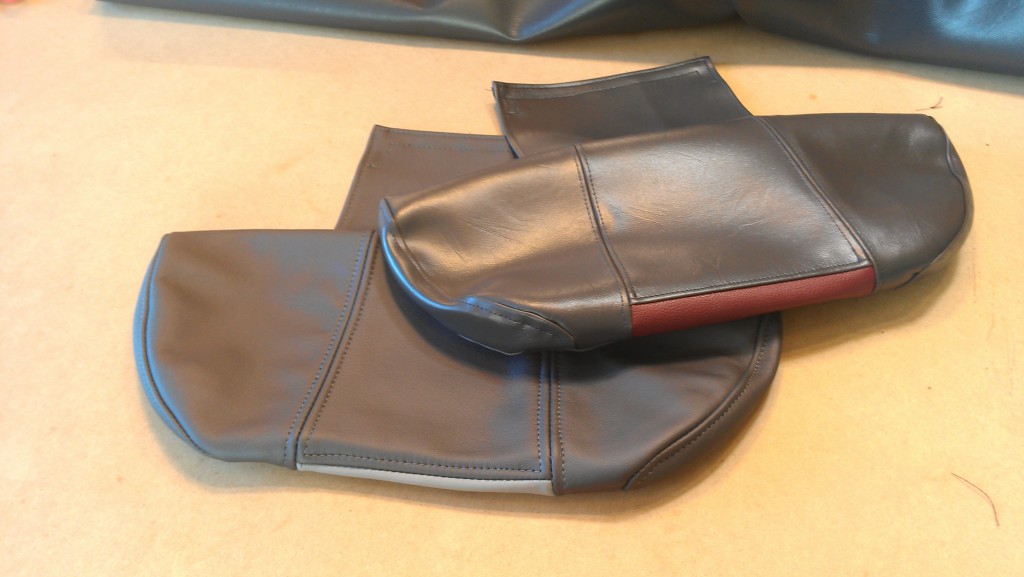 Here are 7, which was what happened on day three: 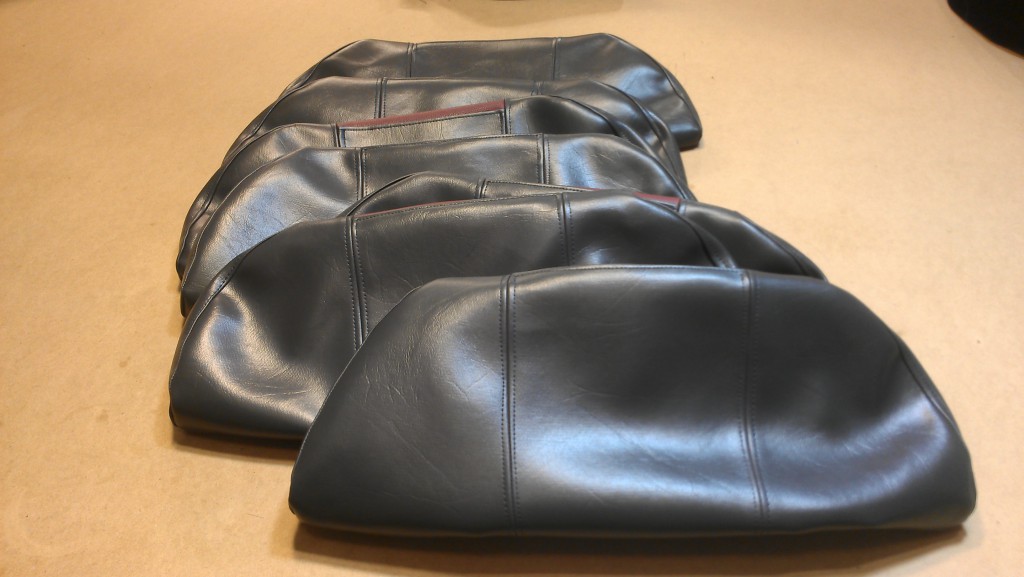 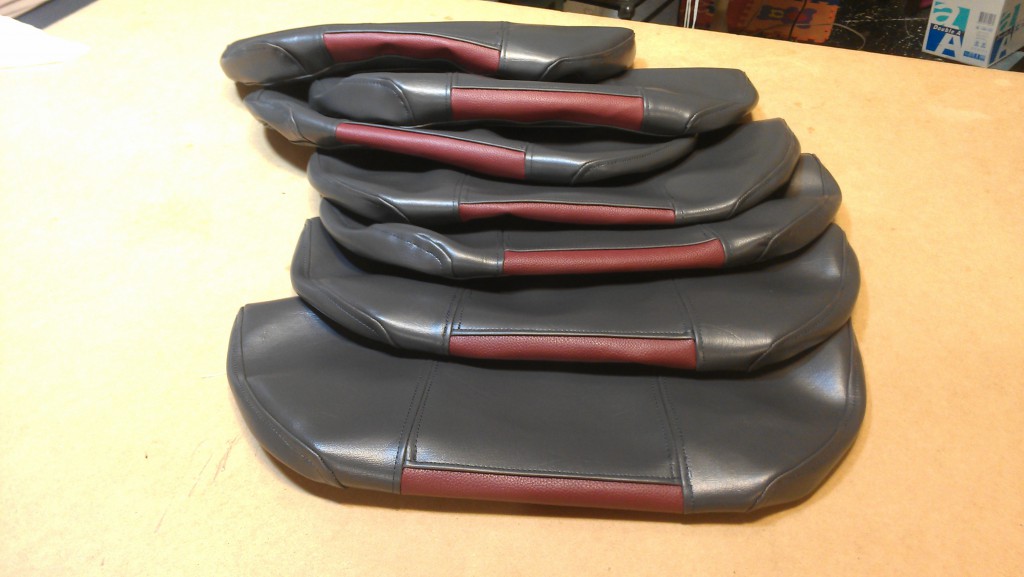 On Saturday, I finished the last steps of the final 2, though I didn’t get another picture of the whole lot, as they looked the same as the first seven. On Sunday I rested. Not really, but one of these days, that might be nice.

The Project: giant blades of grass

Foam tubes covered in more foam to make them thicker. The two foams had been glued together, then separated exactly one night before I went to cover them with the fabric: 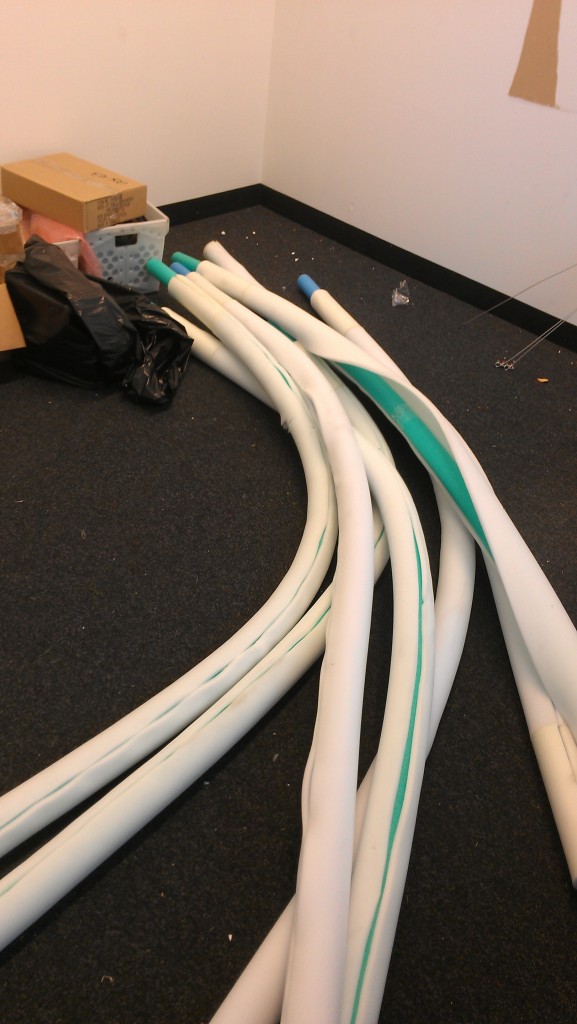 The fabric socks, as previously pictured in a teaser blog entry: 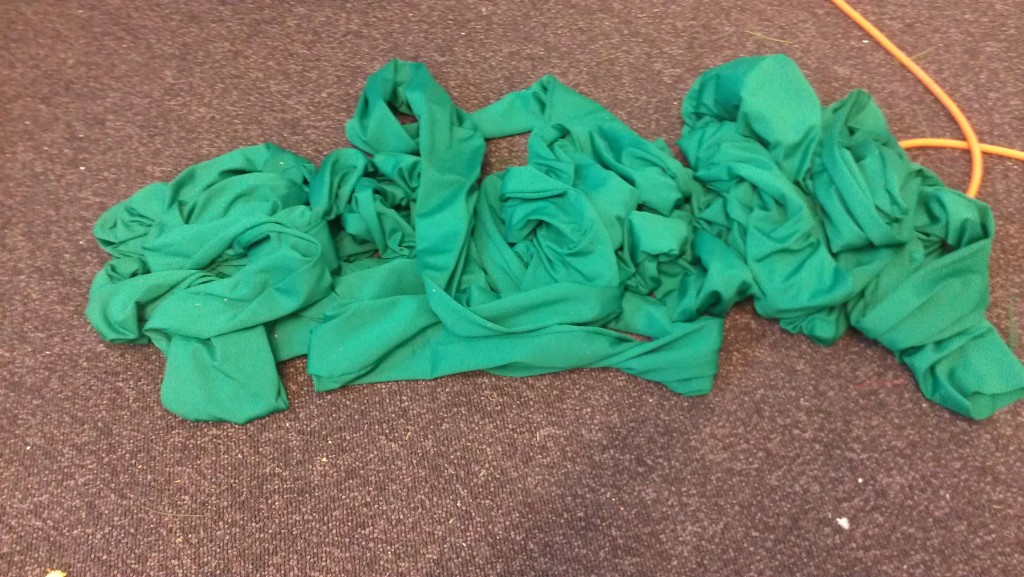 Here’s the first end result–I had thought the ruching was for all the foam tubes, but it was not intended for the grass; just for the vine part. It was delightfully Dr. Seuss-y this way, but that wasn’t what we were going for. 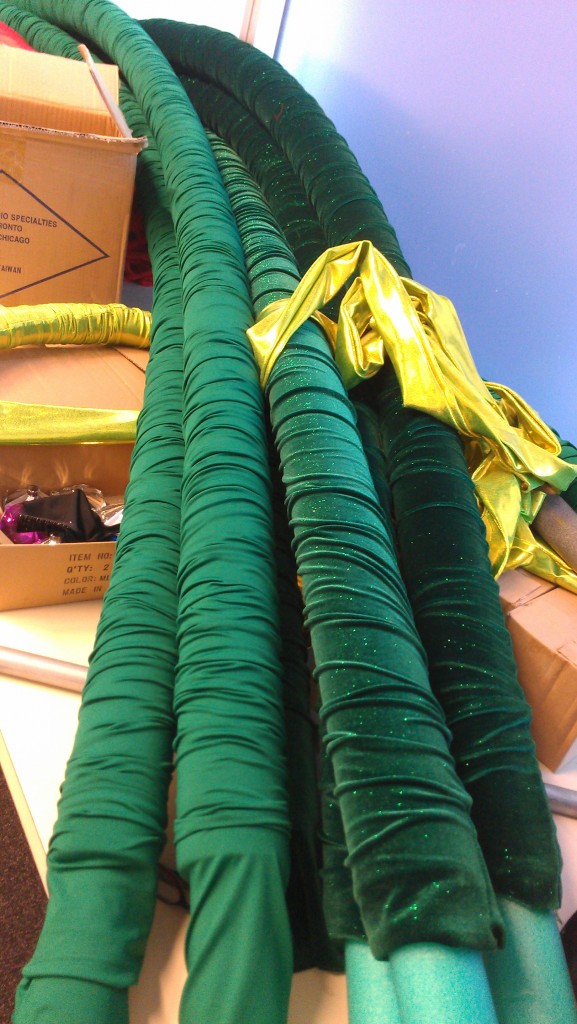 I put pieces of pipe inside the foam to make it stiff, which made it easier to pull the fabric on. The vine: 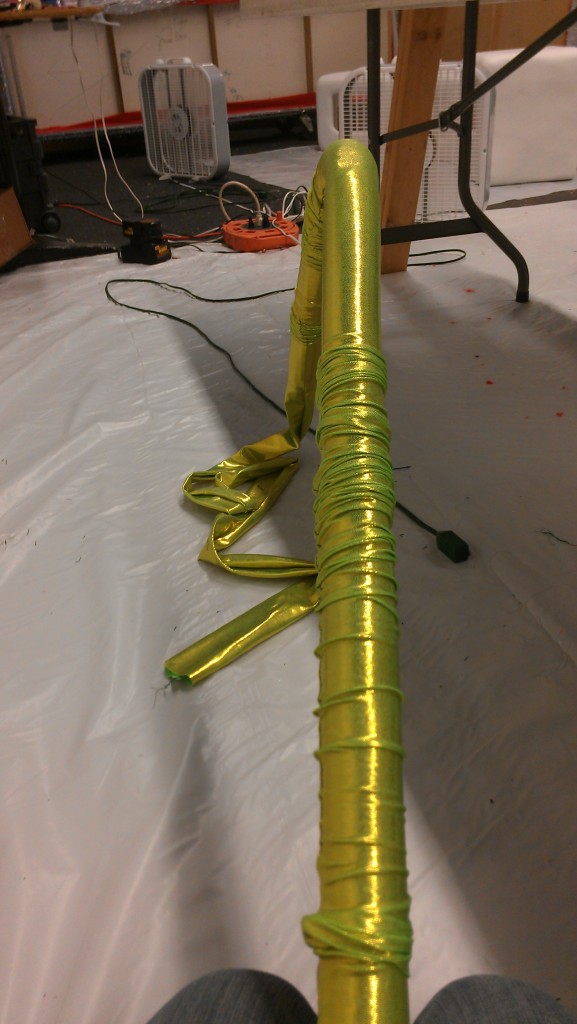 Here they are in the window: 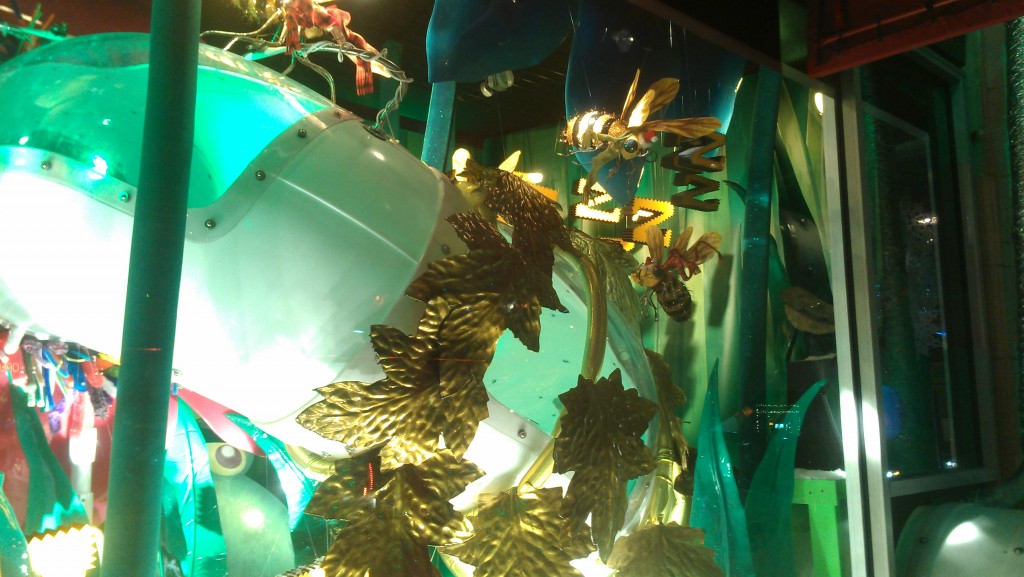 After leaving the Sally Beauty convention, I headed home to make another tablecloth for the local jewelry designer whose website I really need to get ahold of and put into one of these blog entries.

This tablecloth is larger than its otherwise similar predecessor, but so is the fabric. Luckily I didn’t bring a regular yardstick or measuring equal 45″ sides from the center seam would have been a much bigger hassle.

I used the curve template again for the corners: 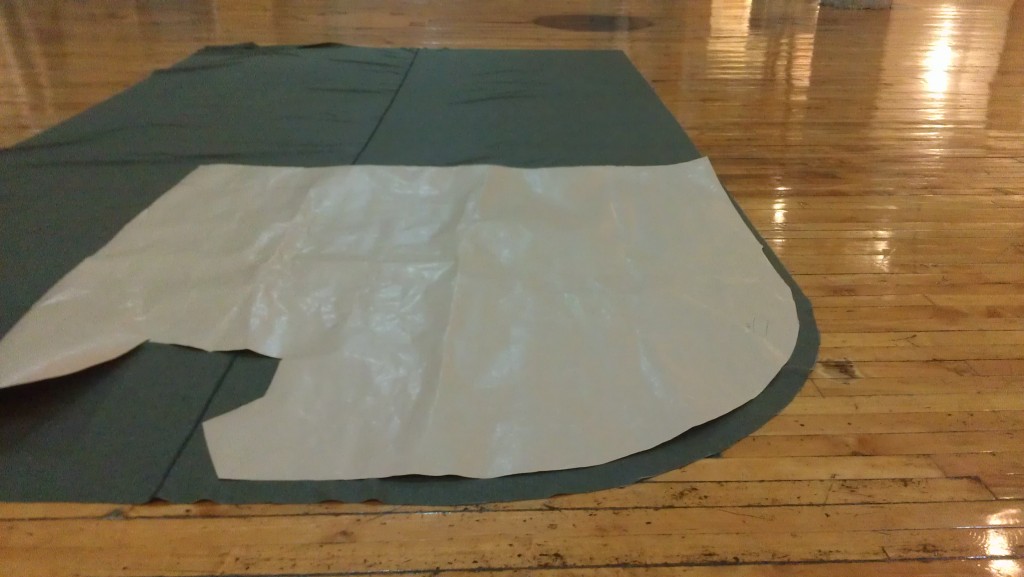