A lot of people’s talents went into creating these windows. The video from 2 years ago can give you an idea of what goes into popping the windows open, putting the crawl-through tubes together, and then sealing the whole thing back off again. But then there’s the planning, the lighting, the backdrops, the lettering on the windows (this year even the plastic covering the windows pre-unveiling had writing printed on it), the lettering inside the windows, and on and on. There are dozens of small motors set up throughout the windows that make the bees fly, the springs boing, the snowman shiver, fruits and silverware and wheels spin. You don’t even want to know how long it took to bring motion to the cascade of jewels.

And most of it’s a pretty thankless job of running around, futzing with wires, installing the not-so-interesting hardware to hang the interesting things from the ceiling, and so forth making the non-visible parts work. I’m not going to go into all of that, mostly because I wasn’t there for much of it. The parts I got to admire were when Carlos, along with his trusty assistant, Carlos, made crazy things come to life. 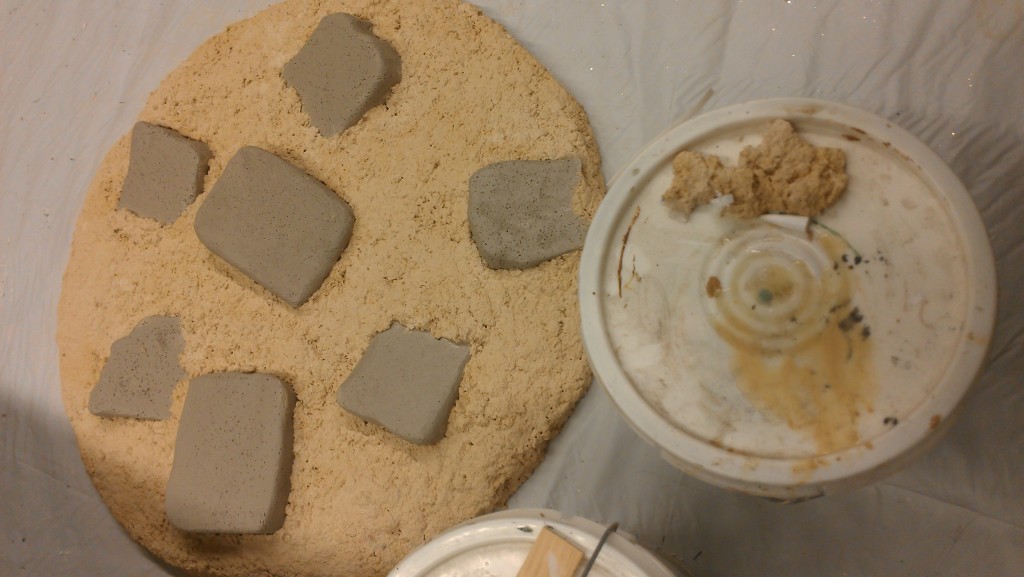 Here it is in the window: 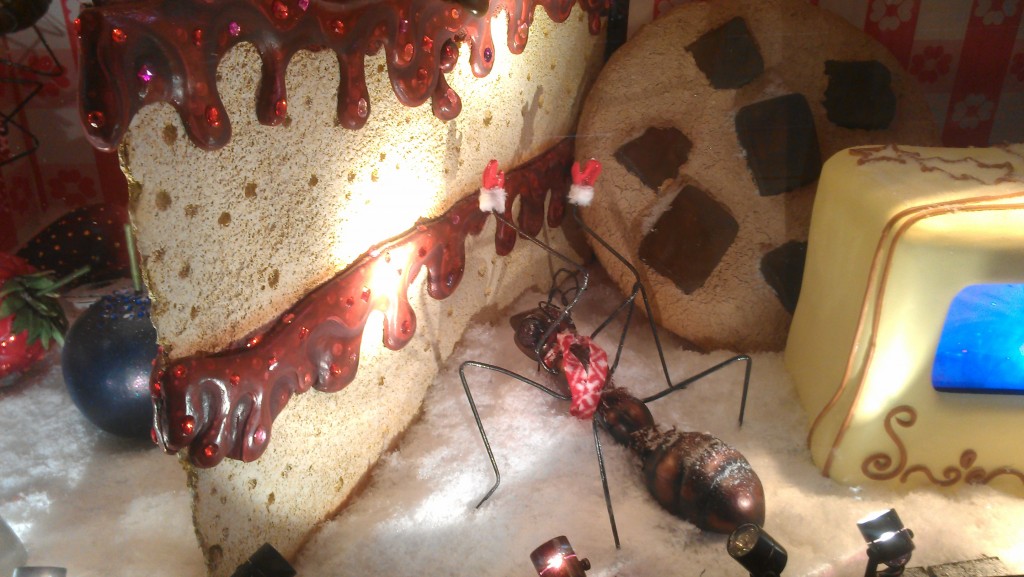 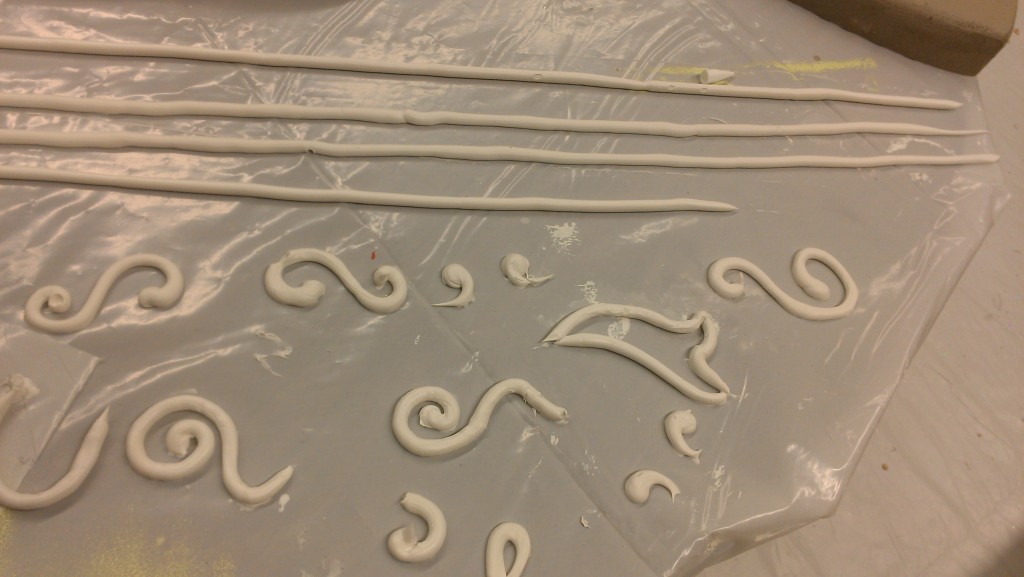 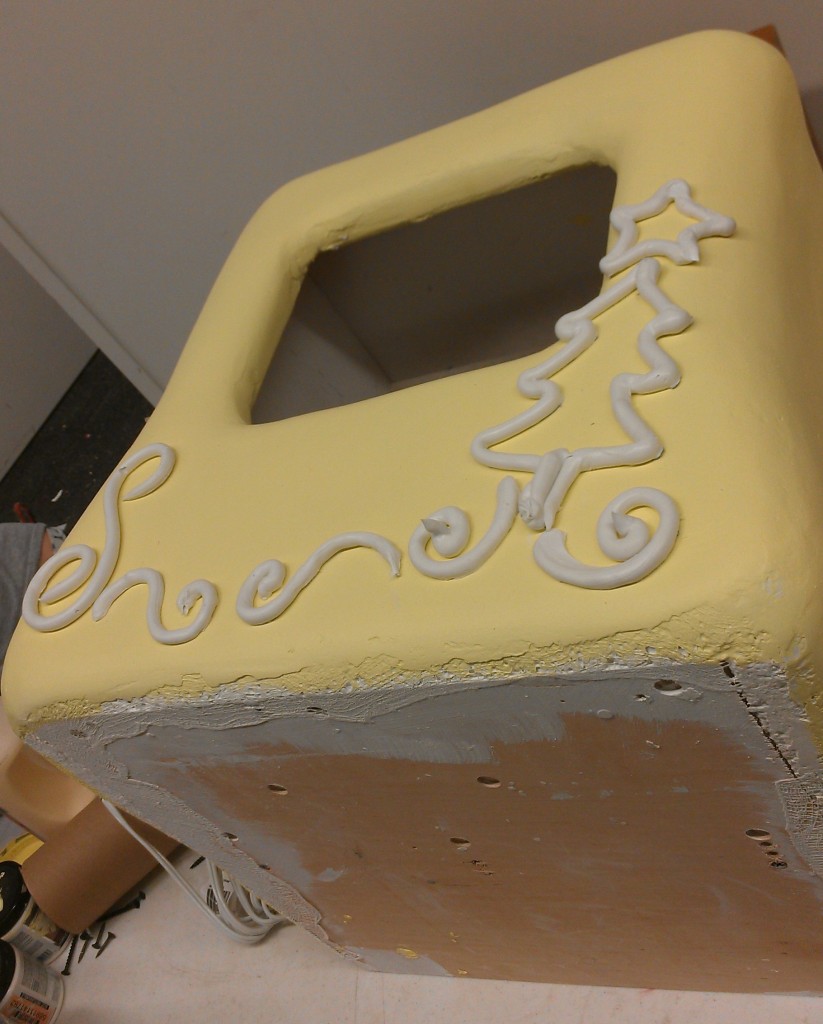 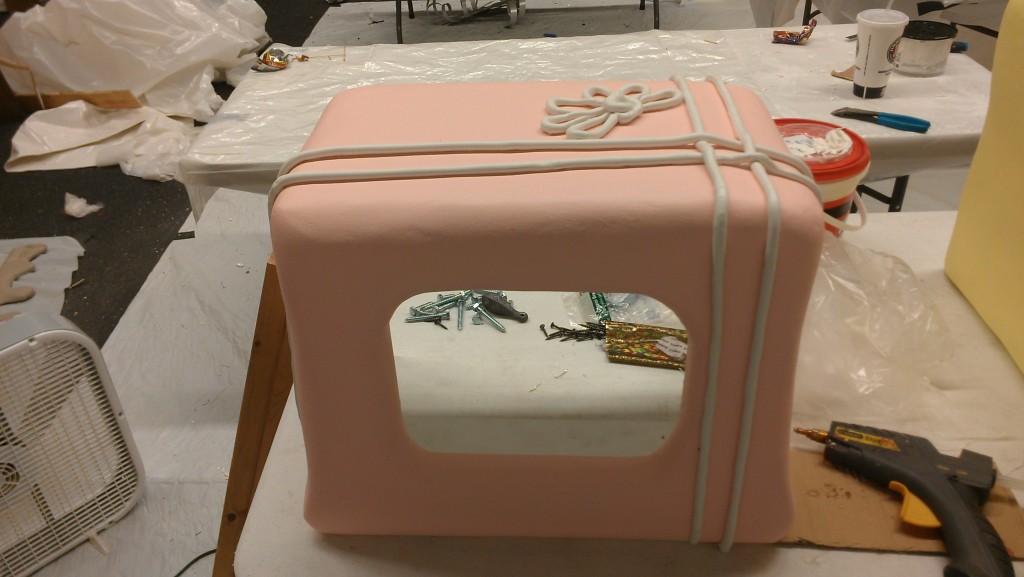 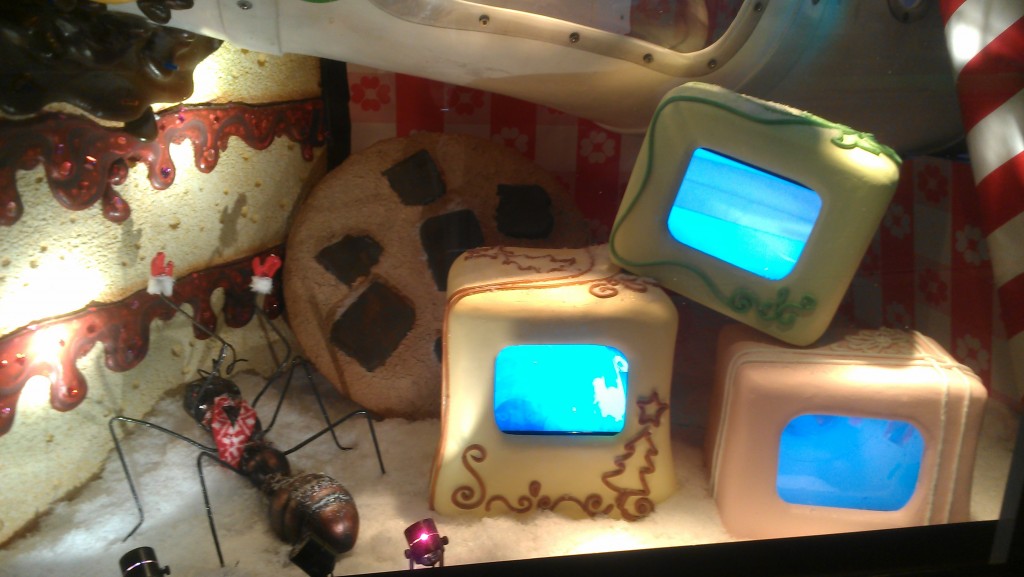 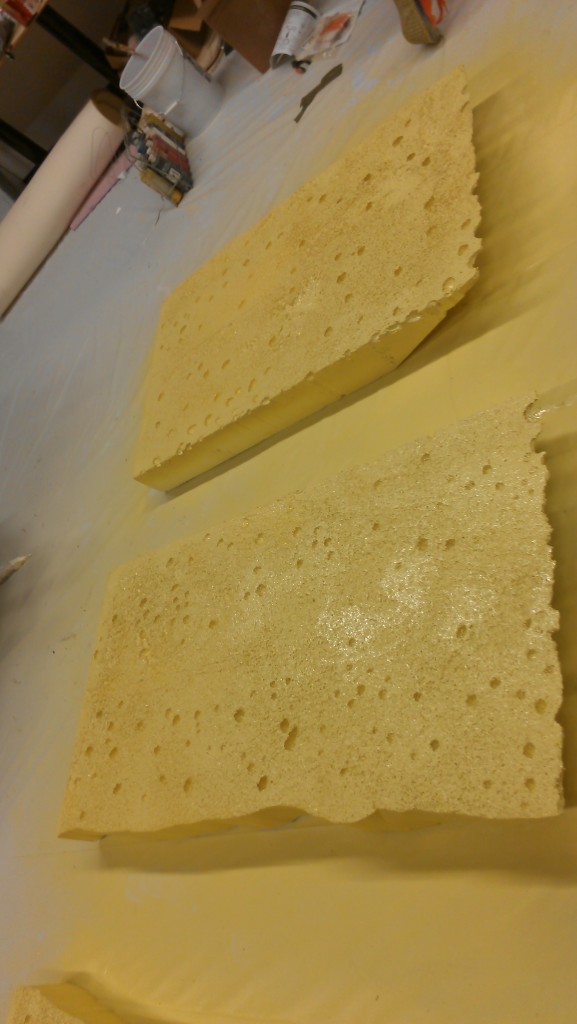 The cake covered in plastic to protect it while the raspberry filling gets painted. To the left, the n&m’s and the chocolate frosting drying on the table. To the right, Carlos’s feet and elbow: 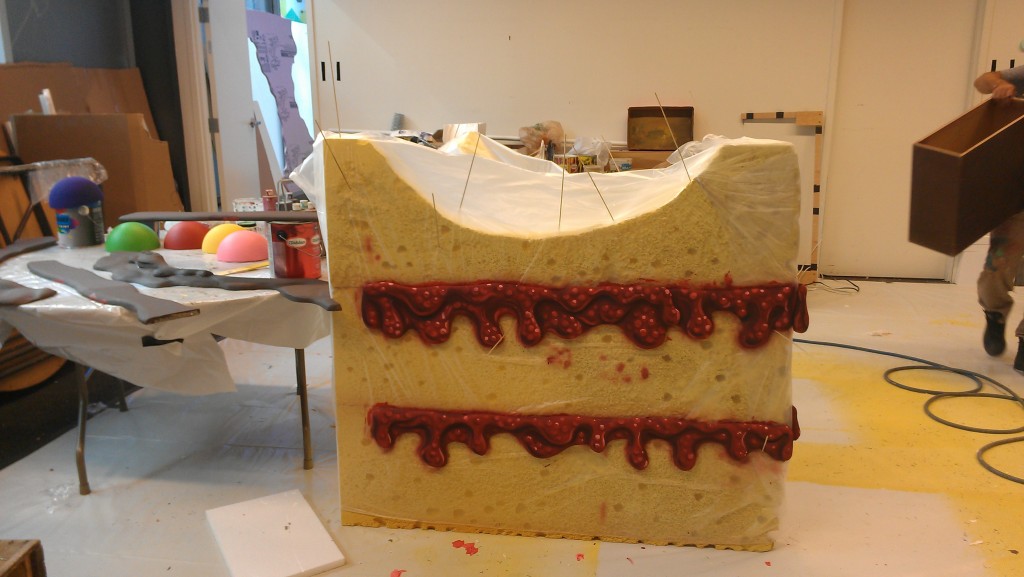 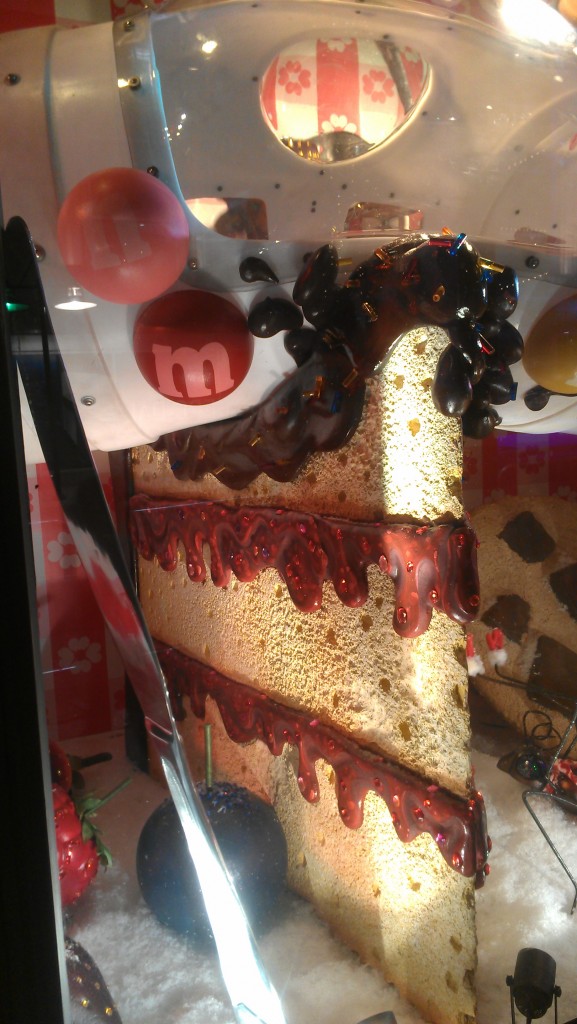 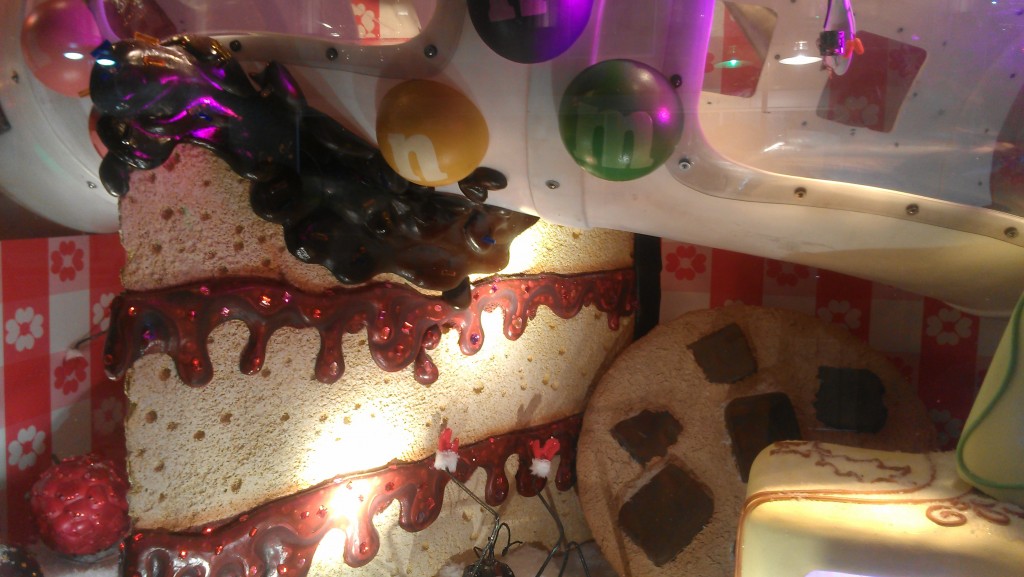 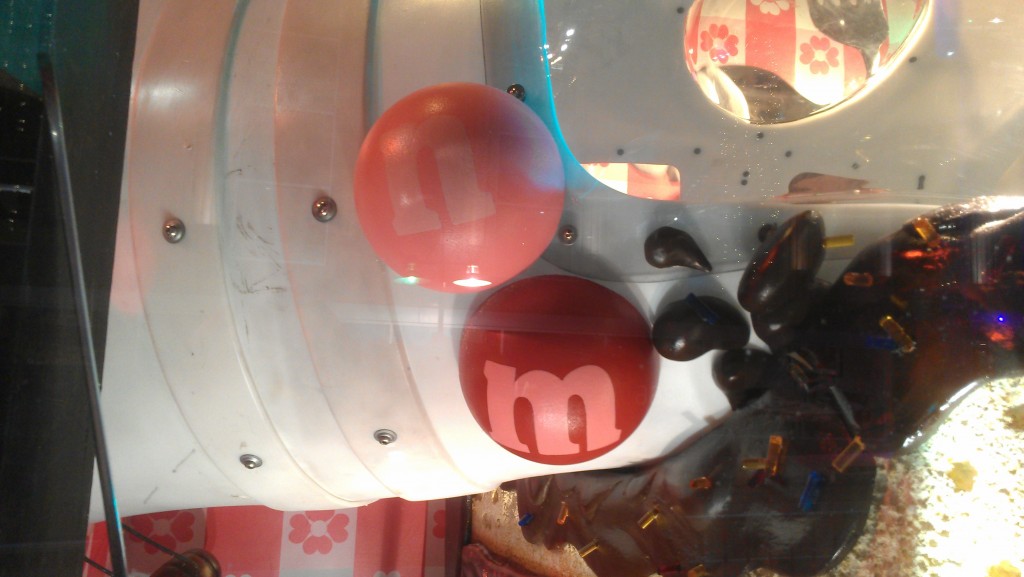 This is how seriously cake-y this looks, even on close inspection: 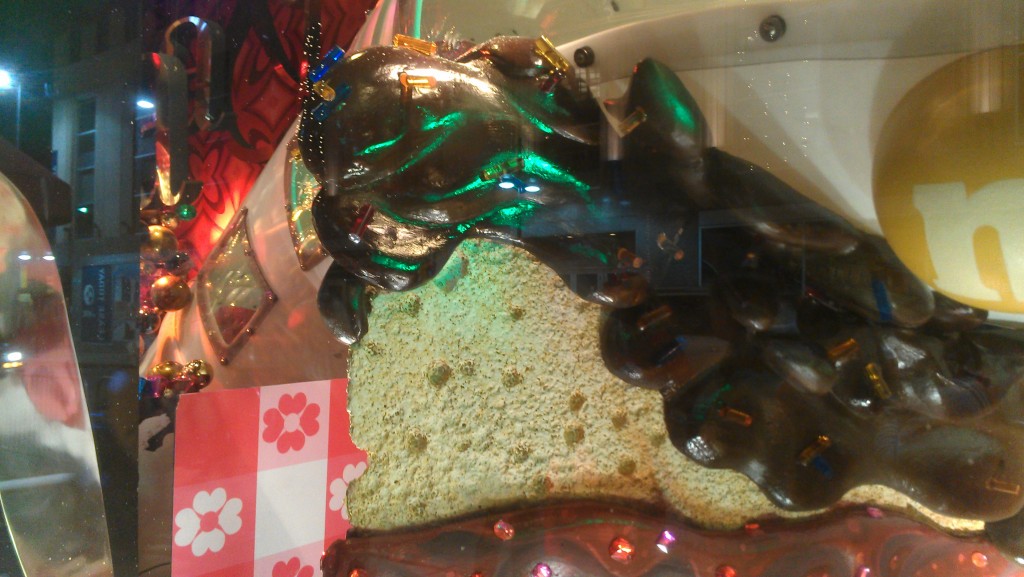 Carlos also put together the infinitely-pouring bag-o-jewels. There’s an enormous, still pile in the front, then a spinning pile behind it designed to look like it’s an unending flow coming out of this huge, magic, velvet bag. 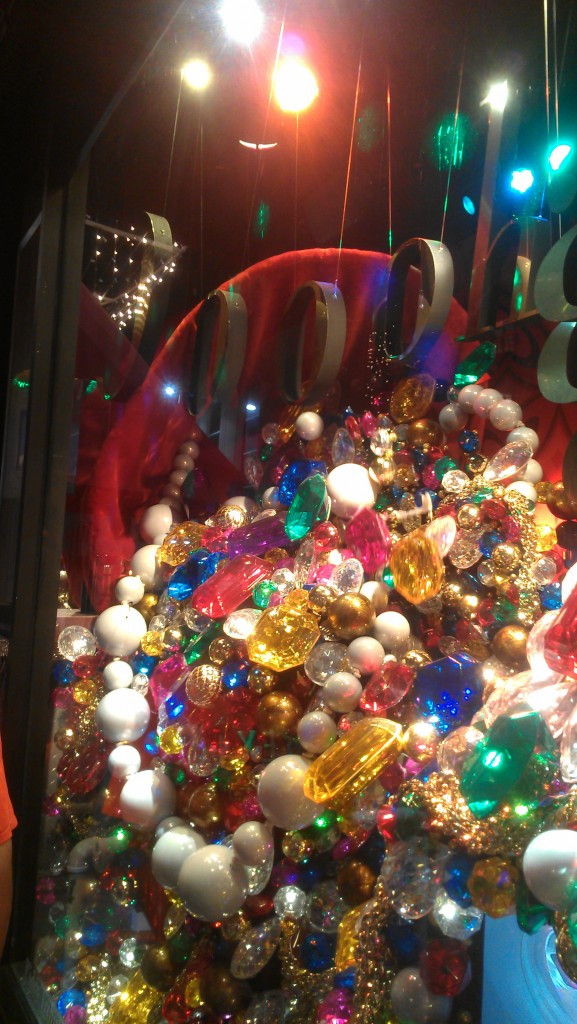 Carlos also blinged up a couple sets of paparazzi, made even more dramatic by the the folks in charge of the lighting: 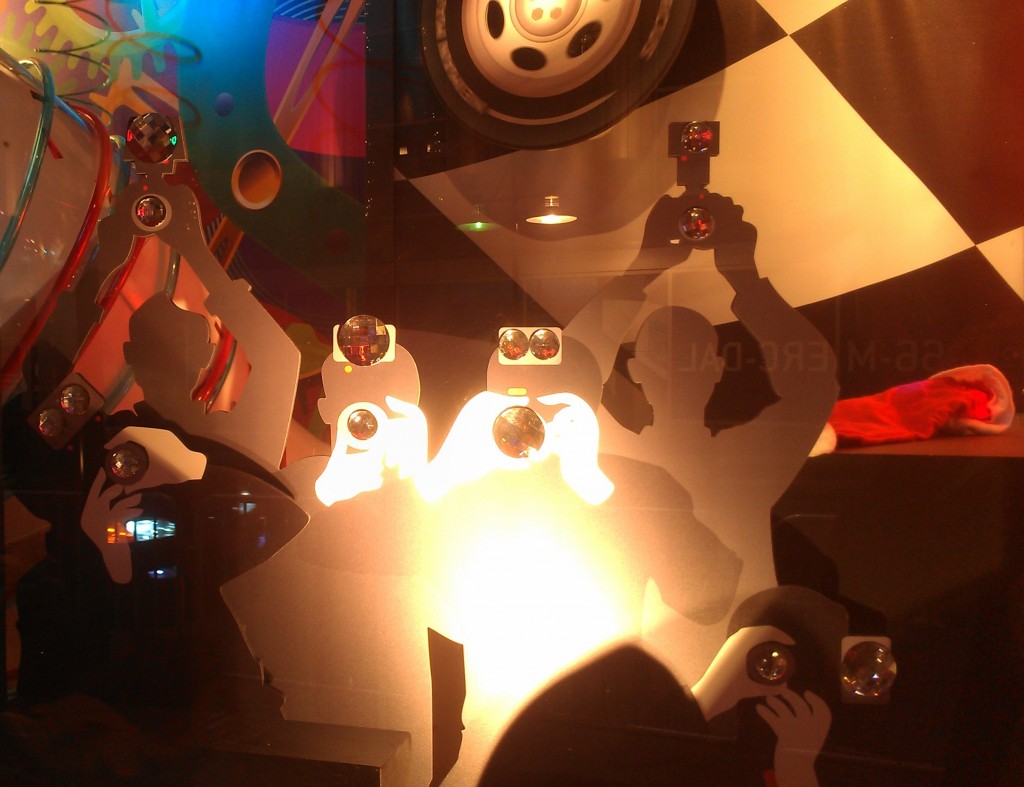 Every year there’s a big event in the nearby park square in which Santa flies in from a nearby parking garage. This year, Carlos built a realistic-looking jetpack that included a chemical reaction designed to look like it really was shooting flames out the back. Alas, I didn’t get any pictures of that, as I witnessed the building of it during what was, for me, a 12-hour day that still had more non-Neiman’s sewing to do in the evening.

The Project: masks for a masquerade

I *transformed* a pair of Optimus Primes with some bling. Hot glue melts this plastic, so there’s a trick to it. 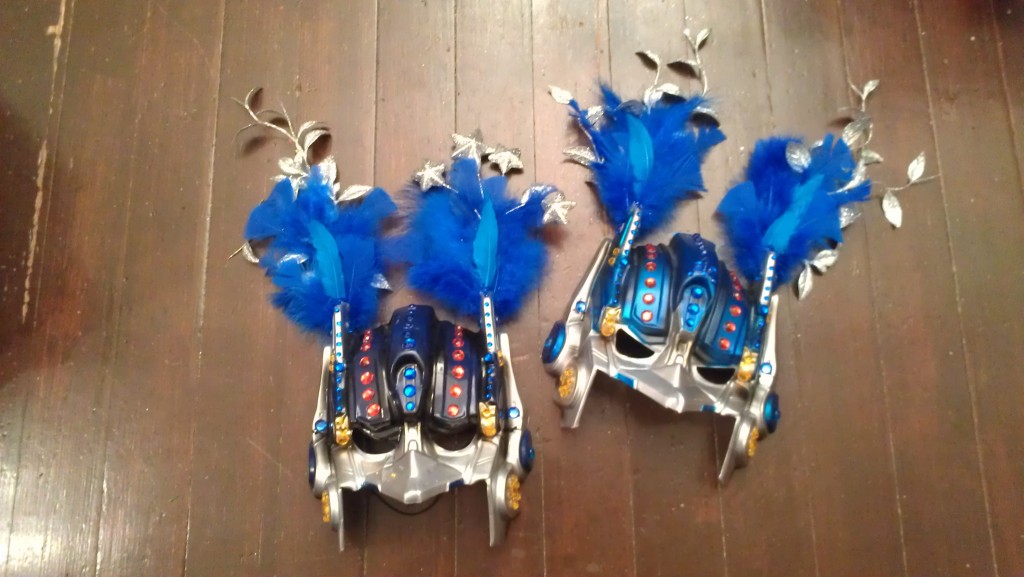 I found a broken mask at a thrift store with a lousy eye mask and the feathers falling off and gutted it for its iridescent feathers to add to a silver one for me: 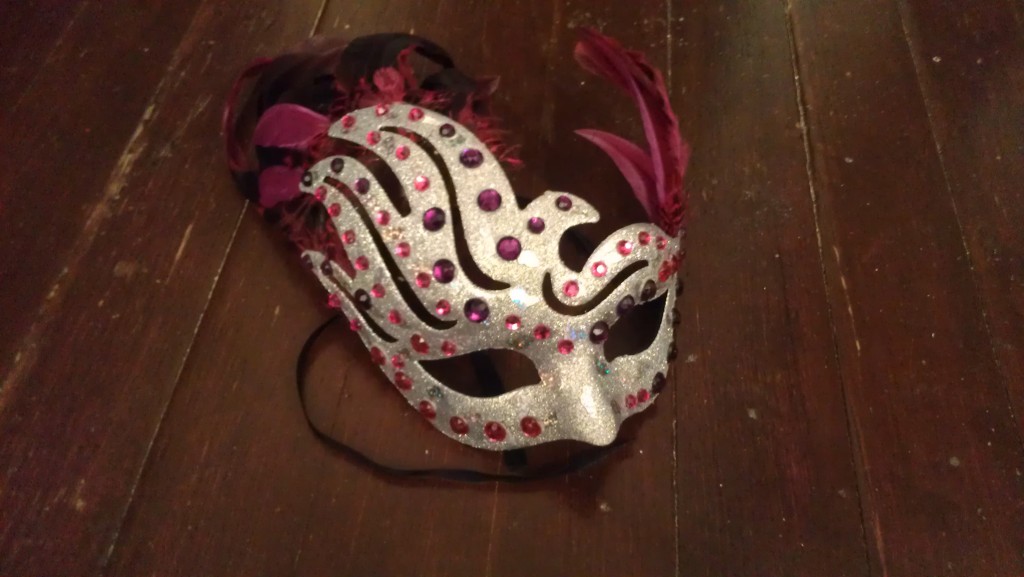 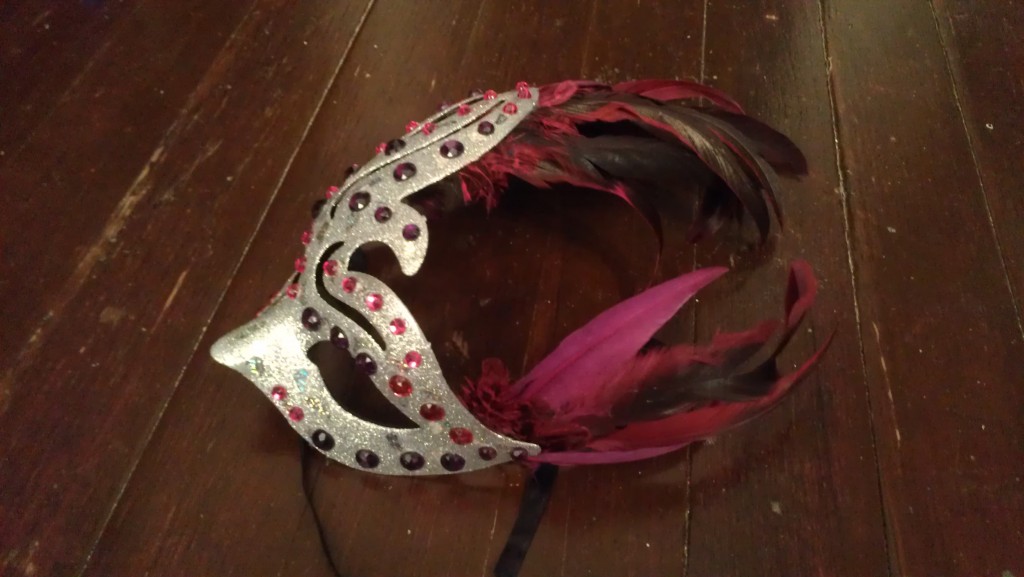 The giant bag of mixed plastic gems I got for this project had about 10 large purple beads, 10 small purple beads, 10 large blue beads, and 40 each of nearly every other freaking color. We emptied the entire bag and flipped them all right side up to discover this. I had intended to make my mask with only purple gems, but it was not to be, and it wasn’t worth forcing it by going on a midnight search of craft stores. I still remember when these types of beads could be bought in separate packages of each color and size without having to send away.

I also blinged this butterfly mask for someone who wound up not able to make it to the event: 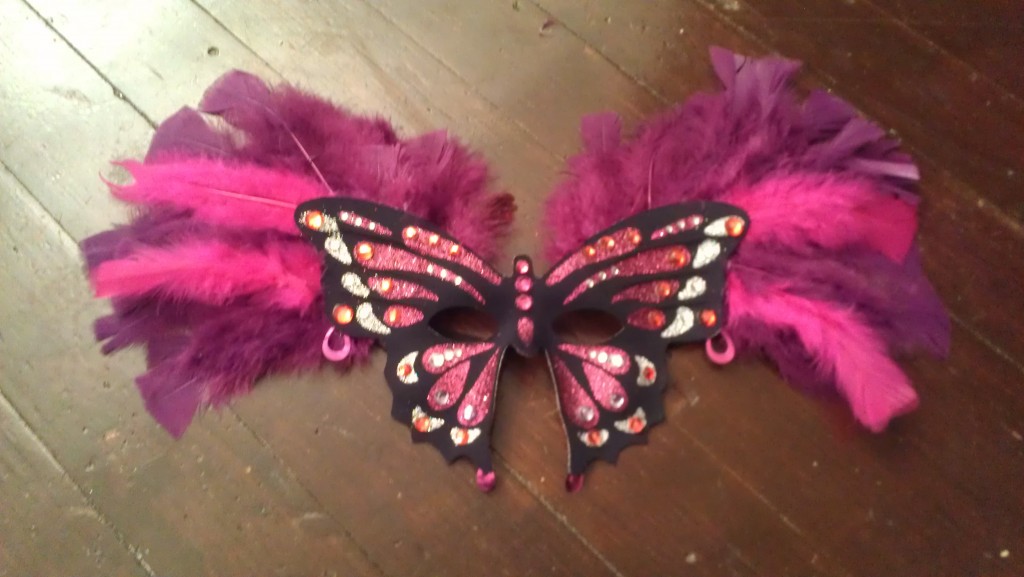 D. Didn’t want to set his mask on fire: 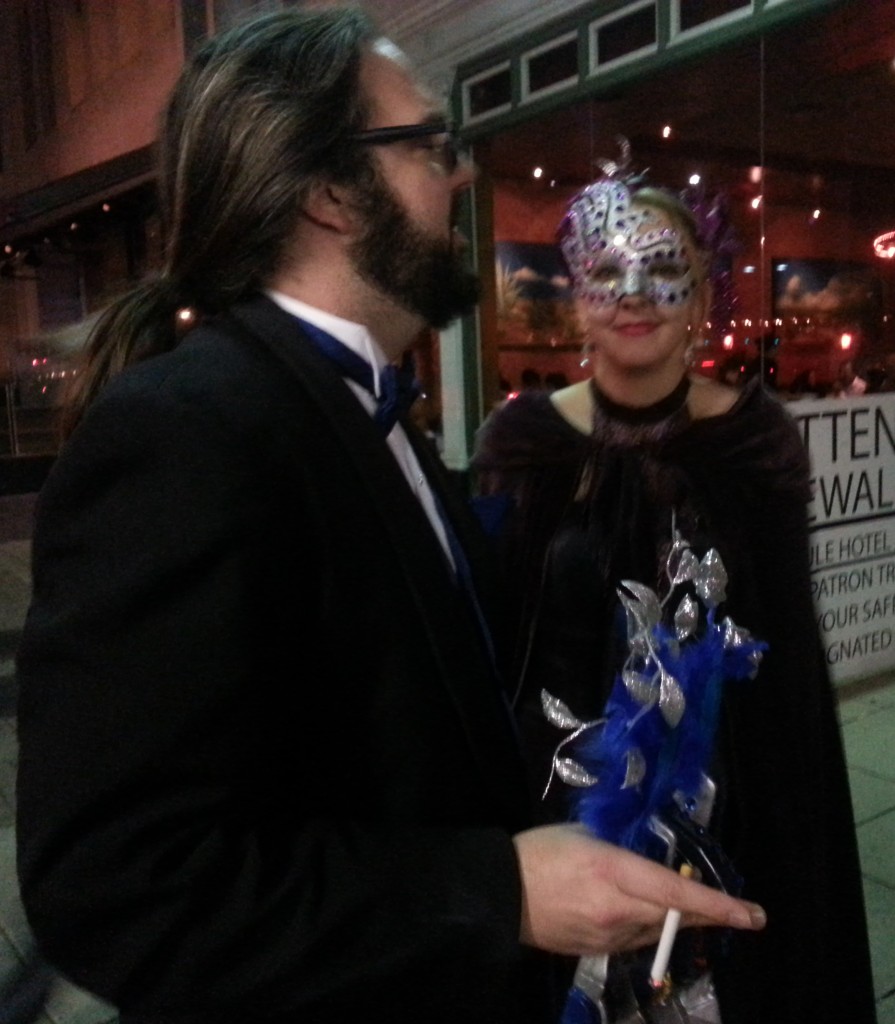 Masks on (the boys decided to rent tuxes to match their masks: 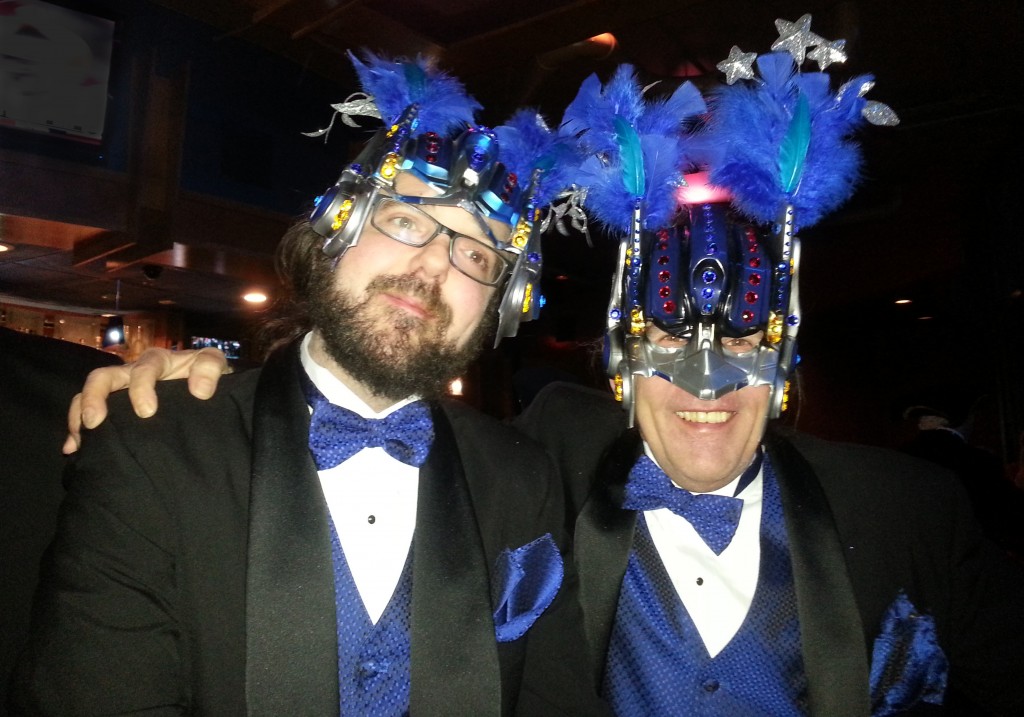 All the way on: 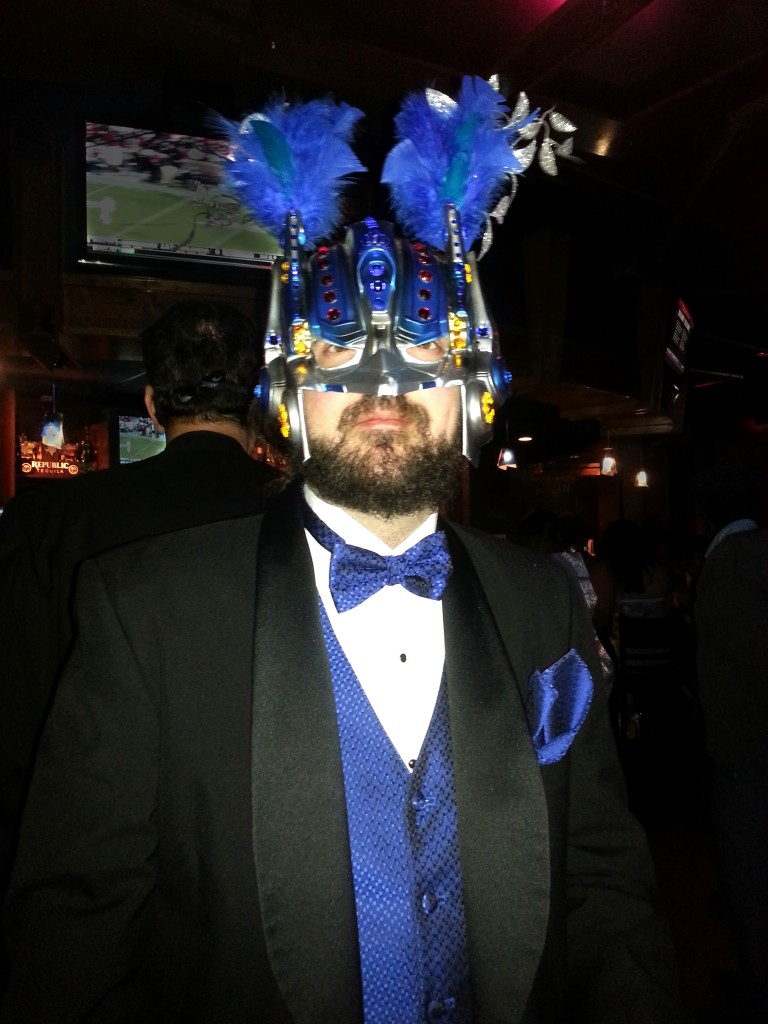 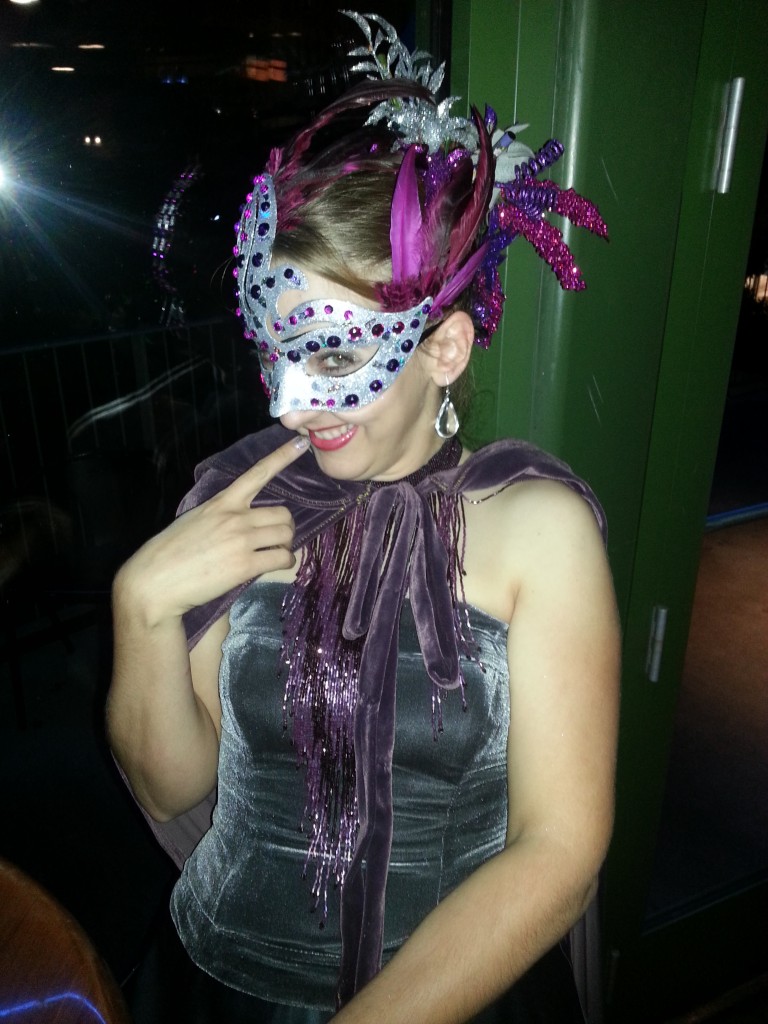 I made that cape in college. It was the project I learned about nap on, the hard way. Bought the necklace broken and repaired it. The earrings are some pendants I put on some pierced-look clips. 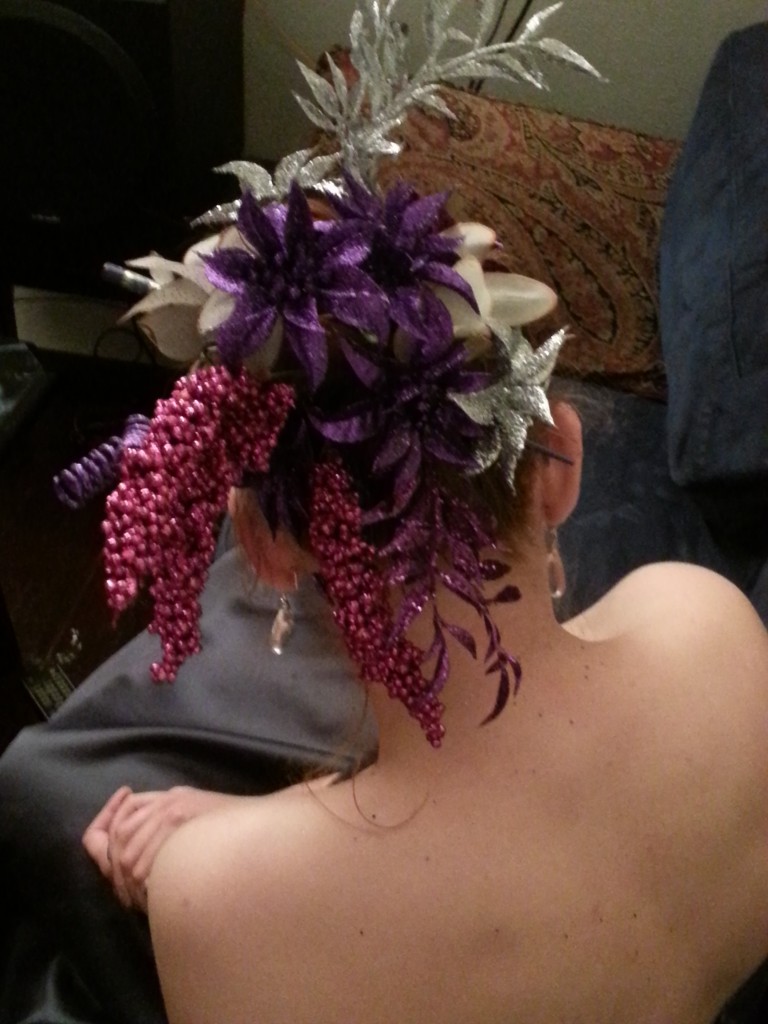