The next step in the topiary process had to be digging up more fabric. After calling around, I located one store that had enough different colors so I could make it in one stop. An old blog entry I found while searching stated that Cutting Corners had many colors of burlap, but this is no longer the case. One location of Hancock Fabrics was worth the long trip out to the edges of the burbs. I think it’s not a current item, but their low burlap turnover has allowed them to retain some selection through the discontinuations.

Hancock Fabrics always has terrible signage; you can be looking almost right at it and not spot it while driving. Instead, it’s generally a good idea to look for the Big Lots sign. On the off chance there’s not one of those next to the Hancock’s, you can locate it with a Hobby Lobby or a Tuesday Morning sign.

I had really wanted Chris Robin to have blue pants, but it was not to be. There is no blue burlap to be had in the Dallas Metroplex. I considered khaki while looking at the burlap shelf, but while the shade was different, I figured it would be too close to what I was using for his skin tone that he would probably wind up looking like a horrible, pantsless little boy. The strategically-placed water spigot that keeps the plant alive wouldn’t have helped the situation. So brown pants it is.

This location of Hancock’s still carried these awesome scissors, though I had thought they didn’t anymore, so I stocked up. These are great lightweight fabric scissors that when I worked at a Hancock’s, we’d use to help our good scissors survive the fleece-cutting season–and they’d still be going strong at the end of it. Plus, they’re so cheap (at most places, between $1.50 to $2, and sometimes as low as $.75 on sale) that I use them like disposable scissors and don’t worry about people (i.e. me) using them to cut wire or some such thing as that. 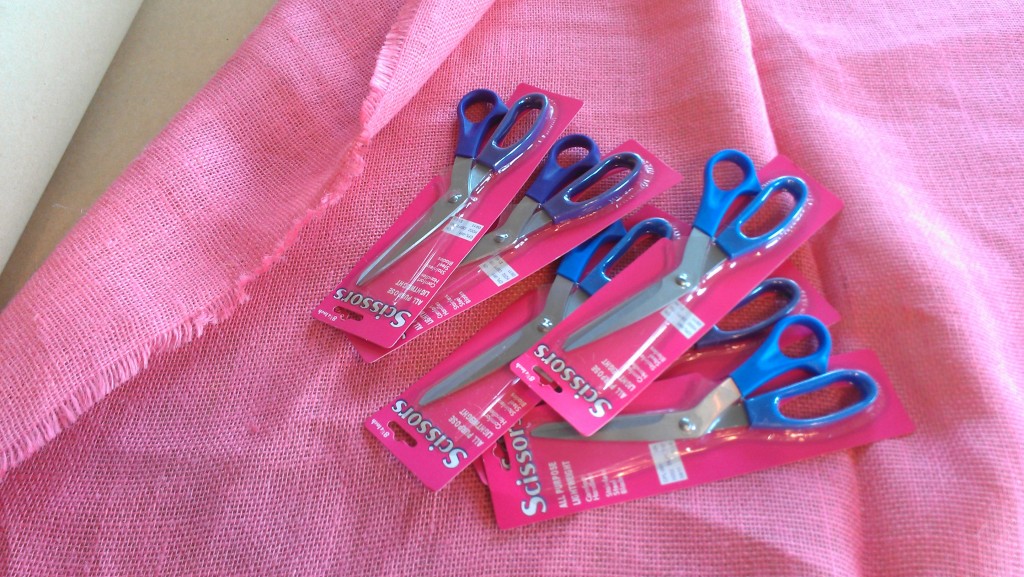 Contrast that with those awful $9.99 sets-of-3 they’ve been pushing like they’re new for the past 2 (or 3?) years. To be fair, I haven’t used them, so I don’t know if the scissors themselves are awful, but Hancock’s tendency to force their employees to push stupid promo crap just keeps screwing over any good workers who are trying to develop real relationships with their customers–and while I rarely make it out to a Hancock’s anymore, it’s like getting in a time machine to see the piles of scissor sets clogging the cutting tables.

Because of the success of my method for pinning Rabbit on location and my desire not to have to undo and then redo as with Tigger, I prepped all the remaining 7 animals before heading out for the next fitting.

Eyore has a gimp leg (back left), and one extra-strong one (front left). I guess he does all his kicking with his right foot; I’ll just leave the story at that. Maybe he needs his tires rotated. 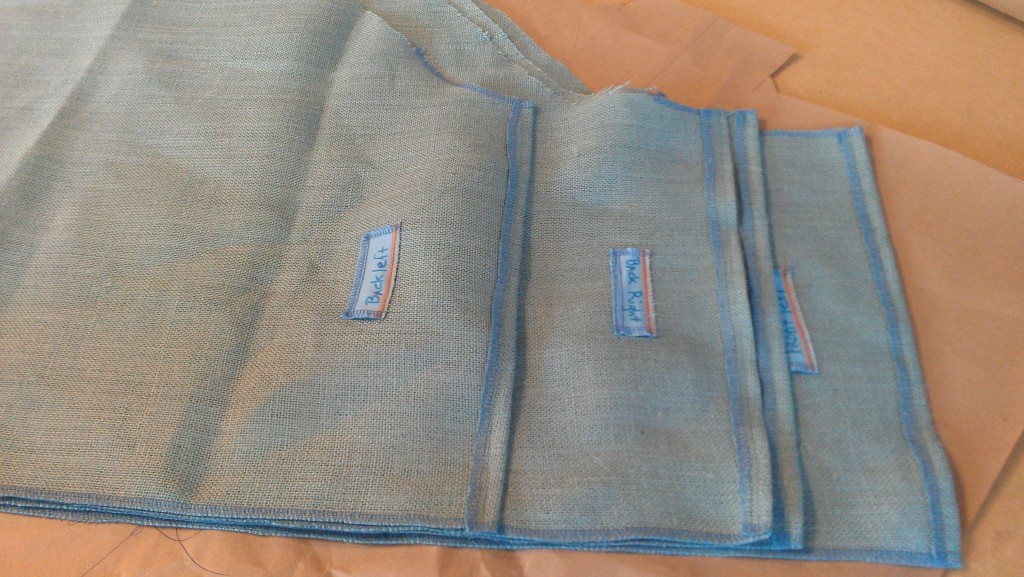 I draped the animals and pinned the heck out of them: 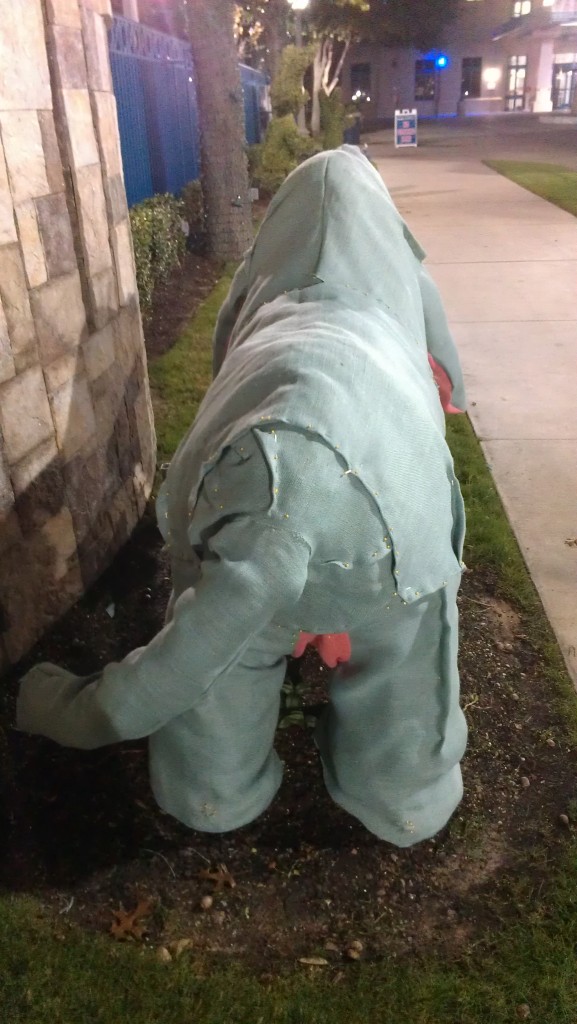 I’ll cheat and skip ahead to fitting #2. Rest assured there was much sewing and gnashing of pins between the previous picture and this one: 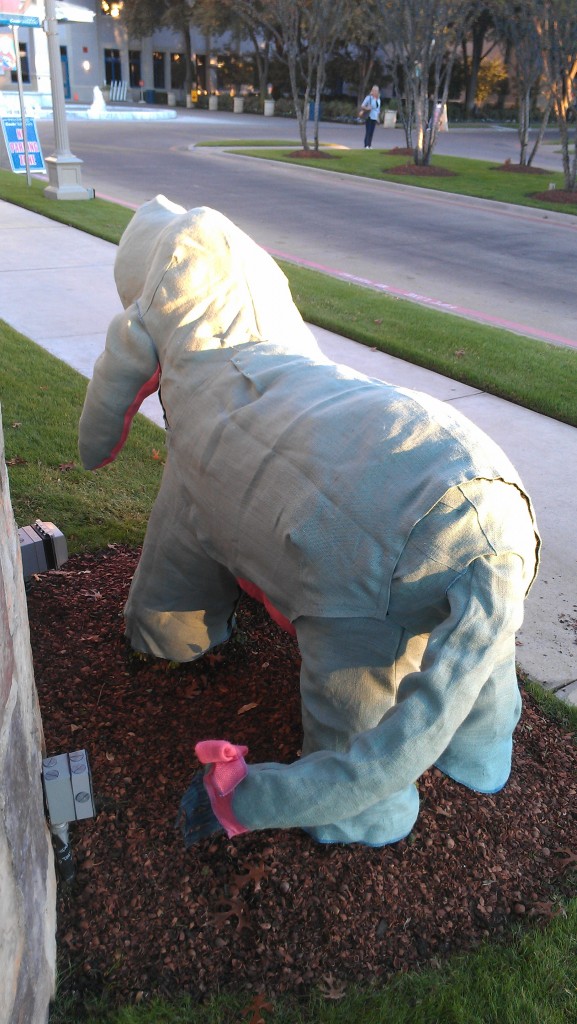 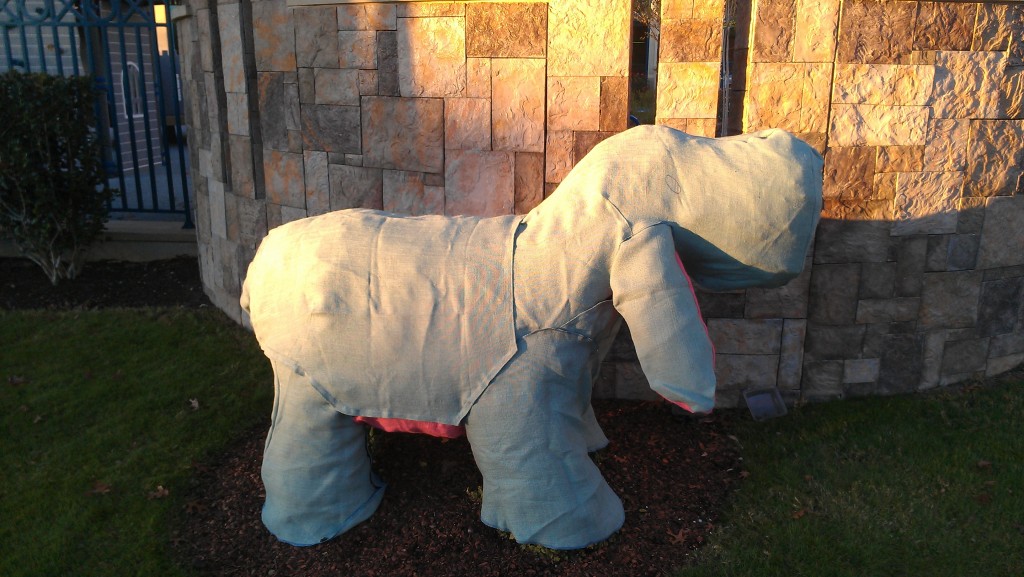 I marked him for some more velcro, where his eyes will go, and where to start his mane. The little pin-stars on his feet in the first photo became this: 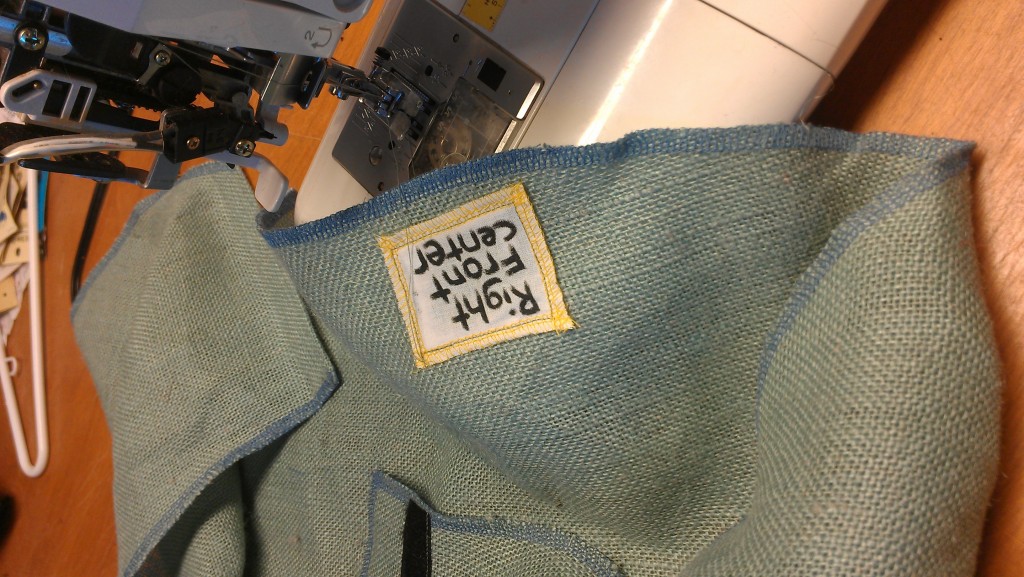 I apparently left without a full shot of Rabbit, so here is a picture of his feet to tide you over: 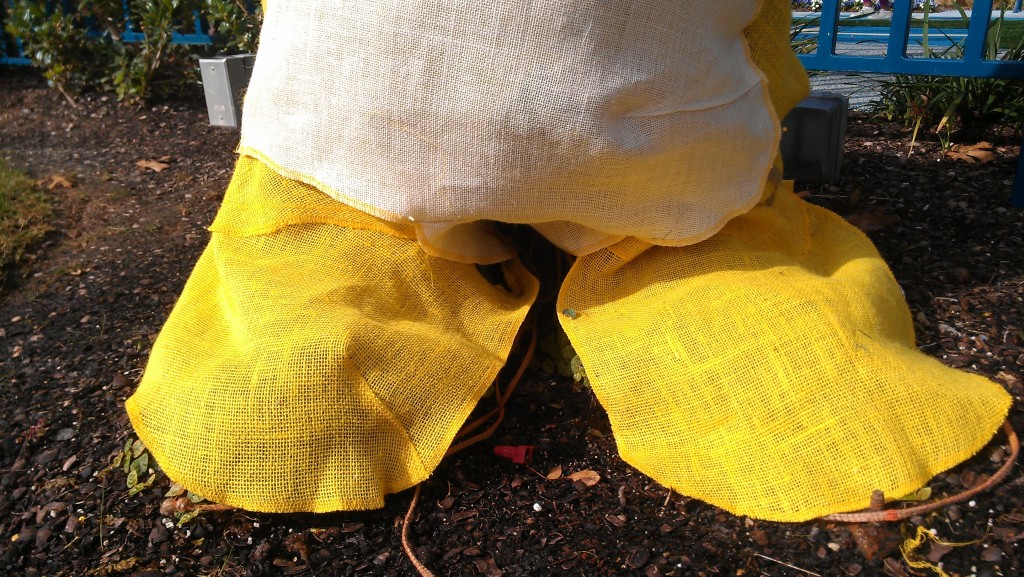 I had originally pictured the overall-strap style of attaching chest to back only for Rabbit, but it’s winding up being the thing for pretty much every animal except Eyore and Tigger (pictured in the background). Also pictured, the everlastingly patient D., the real-life version of the Ryan Gosling Hey Girl Seamstress meme, and who probably does have a full body pic of Rabbit on his phone. 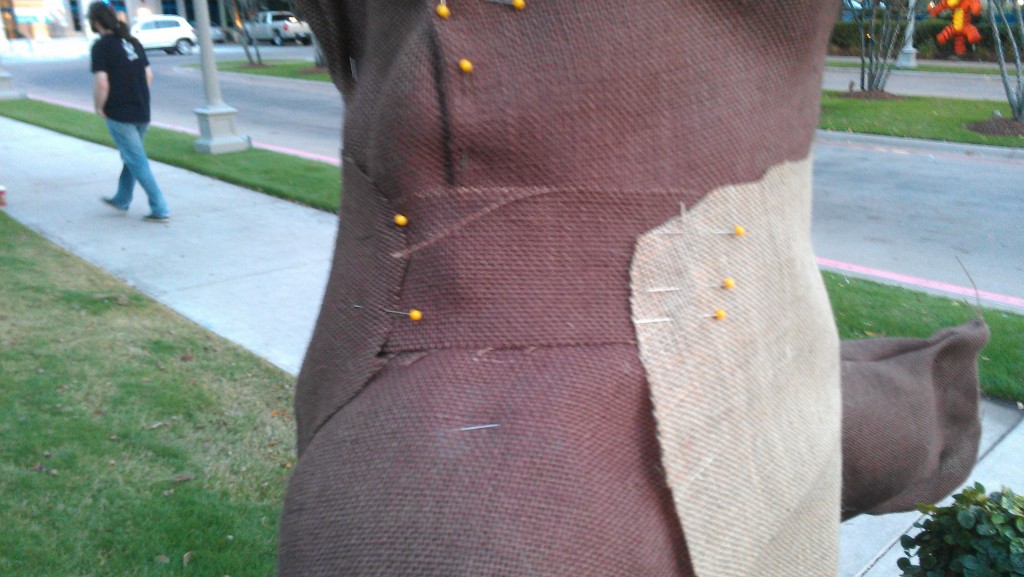 I put together a Roo ear from scraps, figuring that sewing in advance was just going to be a waste of time, like his mom’s hands were. 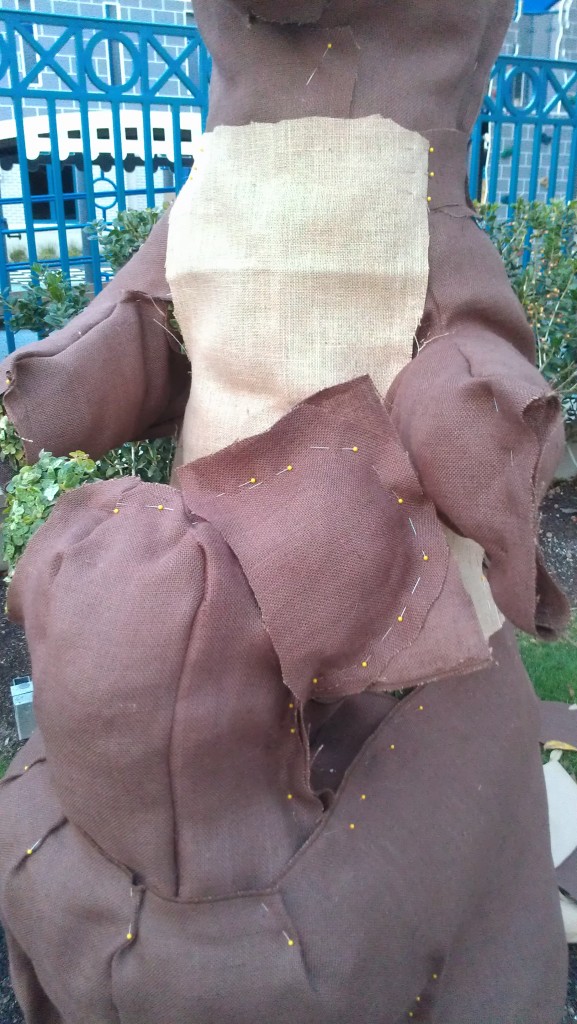 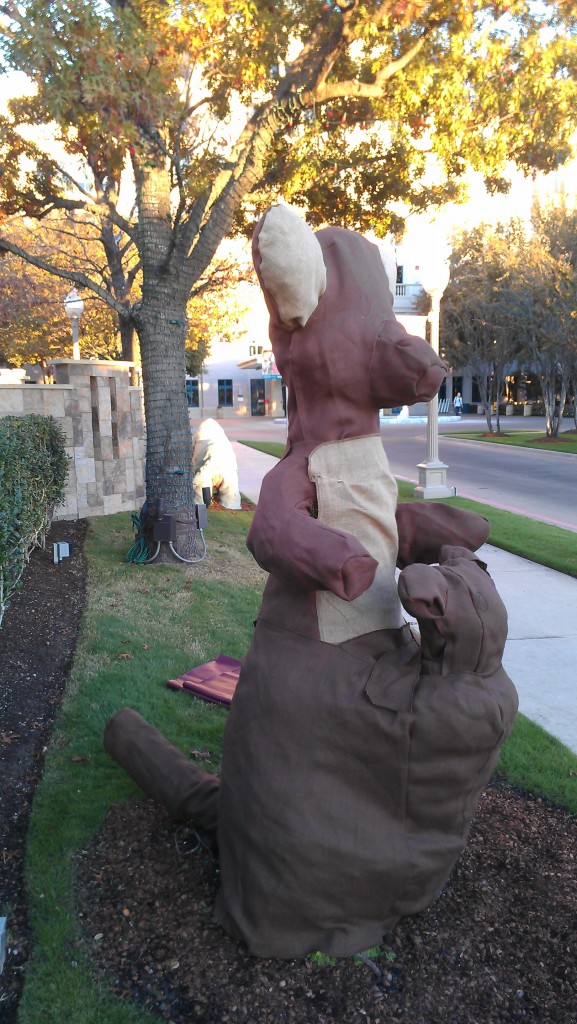 She totally needs to shave her pits; there’s stuff growing in there, woman! 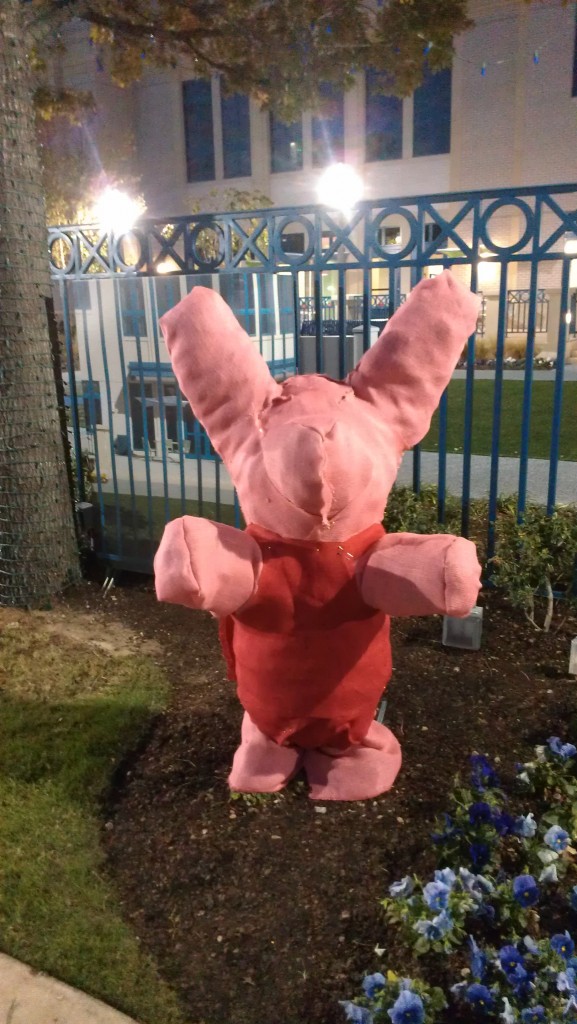 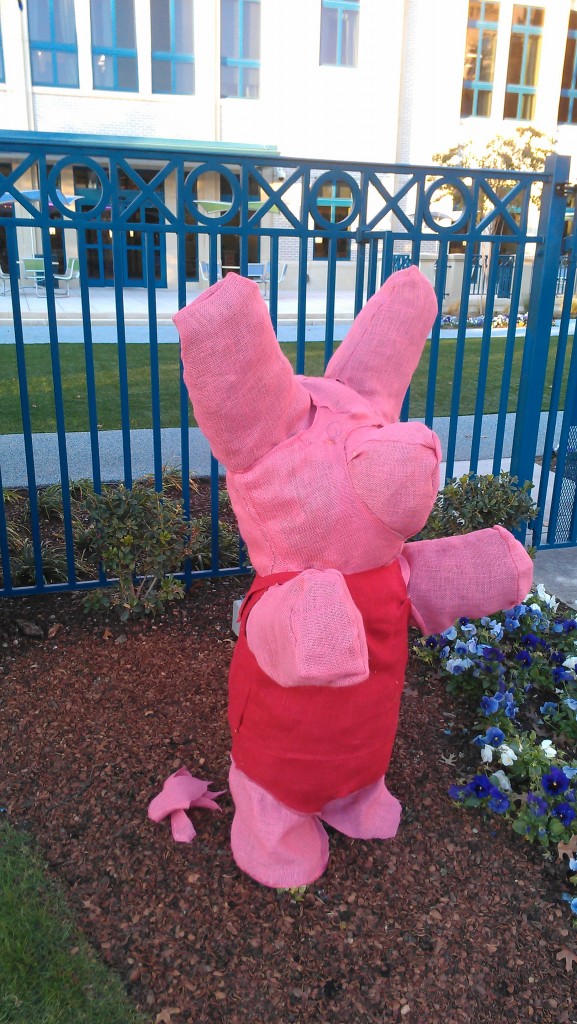 I started Pooh, but it got too dark to continue. Got to mark his legs and diaper, though, which got filled with mud. Oh, Pooh! 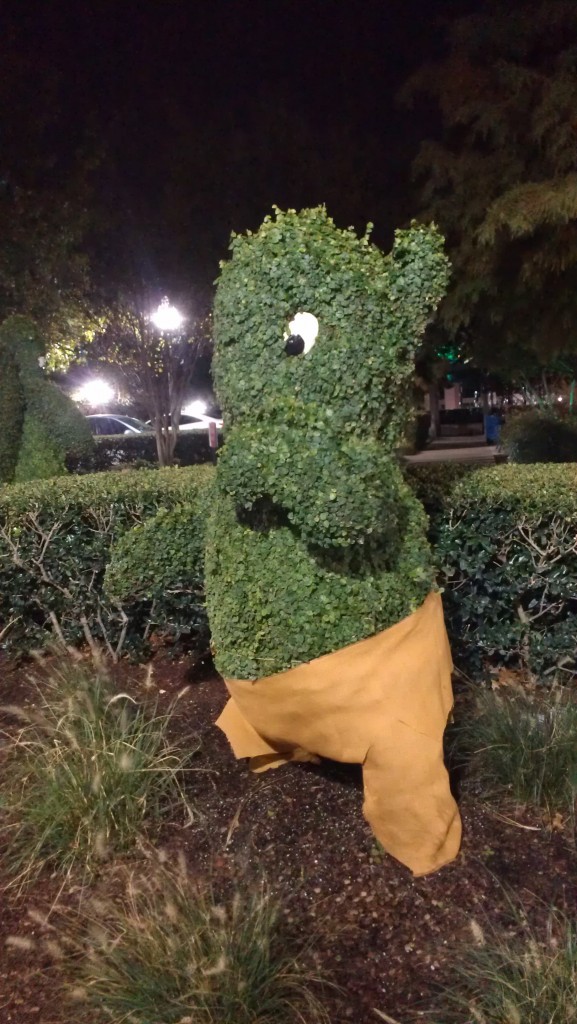 I did get to see this, though: 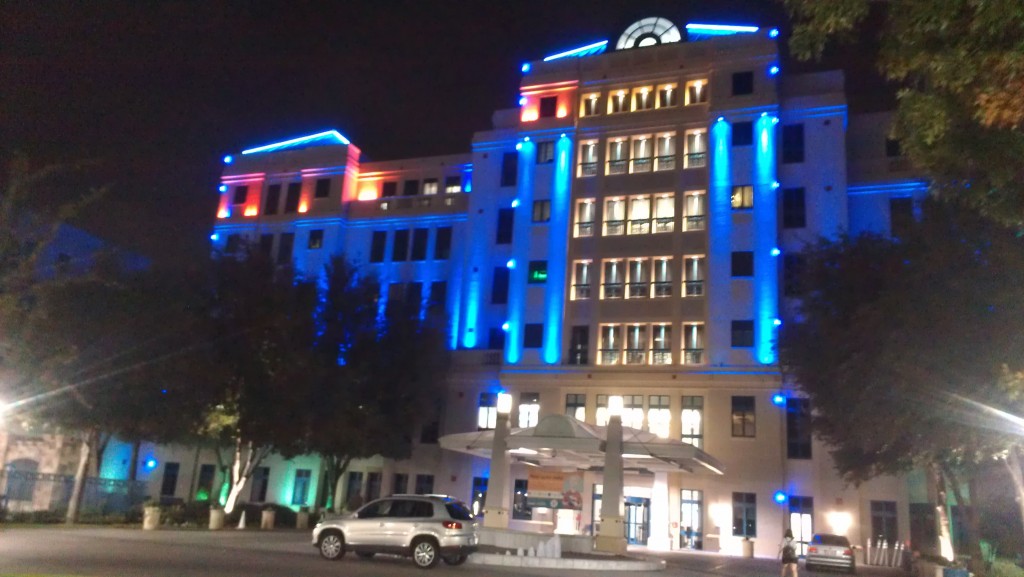 The cool thing about fitting plant-folks instead of people, who would be mad about this sort of treatment:

On the other hand, I usually wouldn’t need to stand on a ladder to reach peoples’ heads; even a basketball player would stoop so I could get to his head if I were draping him for a balaclava or something for some reason. 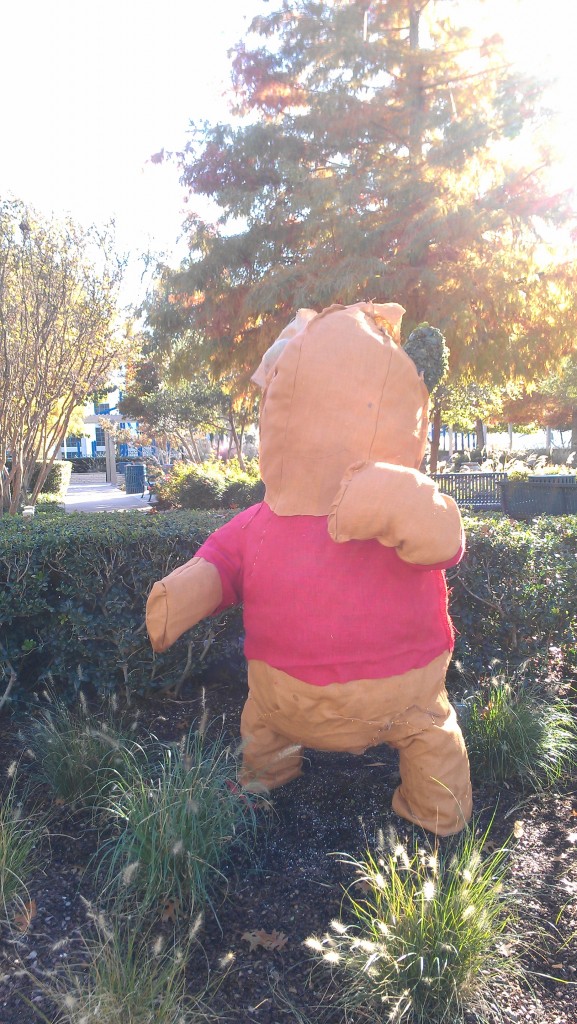 I did his ears in the same manner as Roo’s. Also went home with a lot more mud in his diaper again; he poured water off his hands and down his legs the whole time I was fitting him. 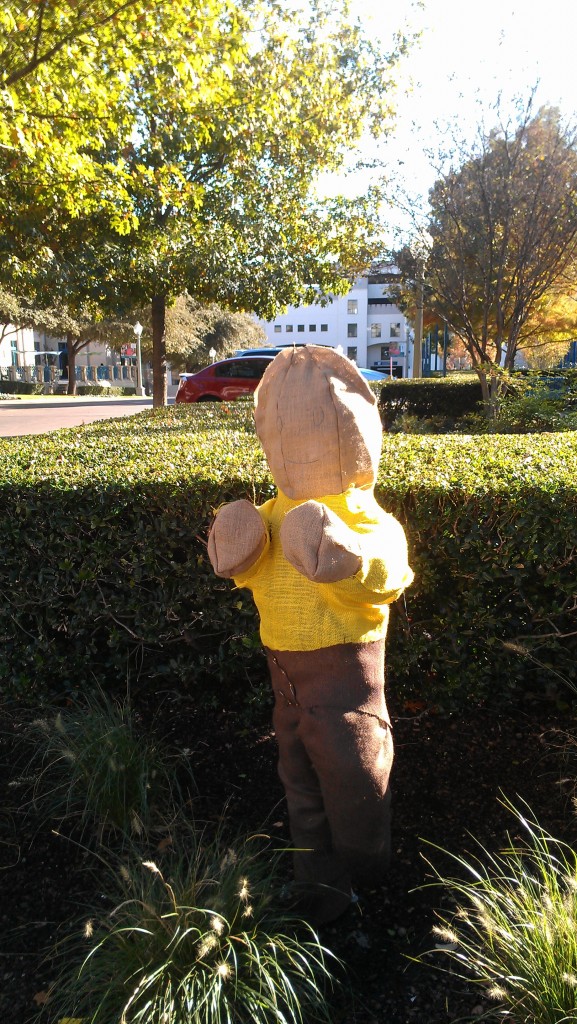 This is what his shirt looks like–nothing like normal-people shirts: 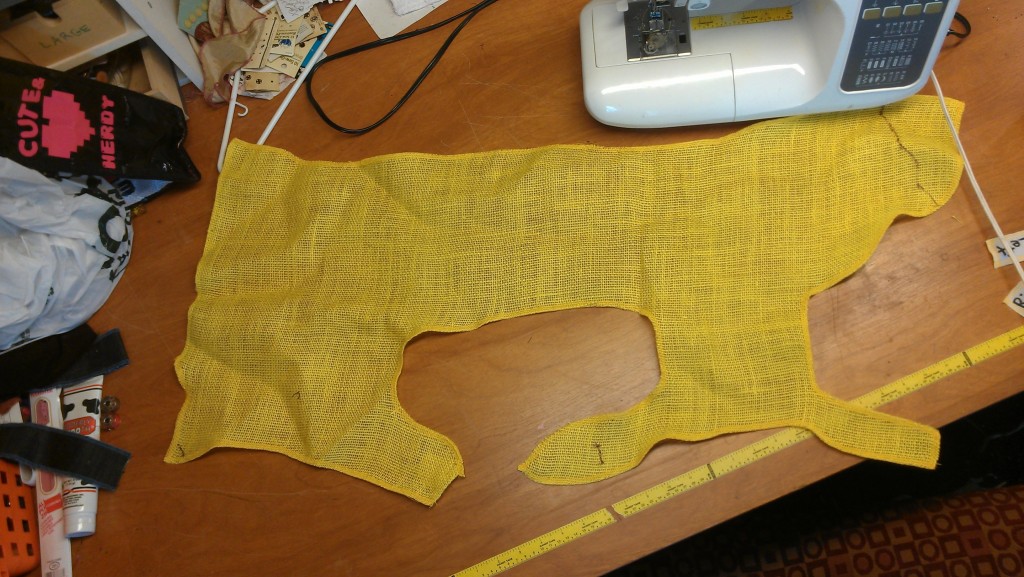 (Also, every time I look at that “cute and nerdy” bag, I start doing a double-parody on Weird Al’s “White and Nerdy” song, which is my alarm clock, so it gets stuck in my head easily.)

Here is the angel (unrelated to the whole Winnie the Pooh story, but still a plant that doesn’t need to freeze to death in the winter): 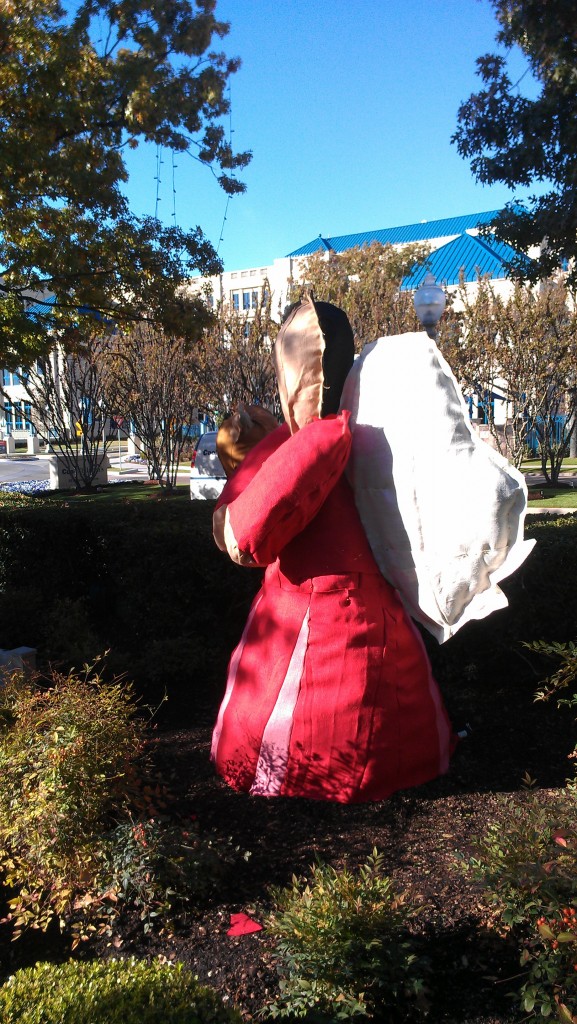 Her arms proved to be waaaay easier than I first thought. 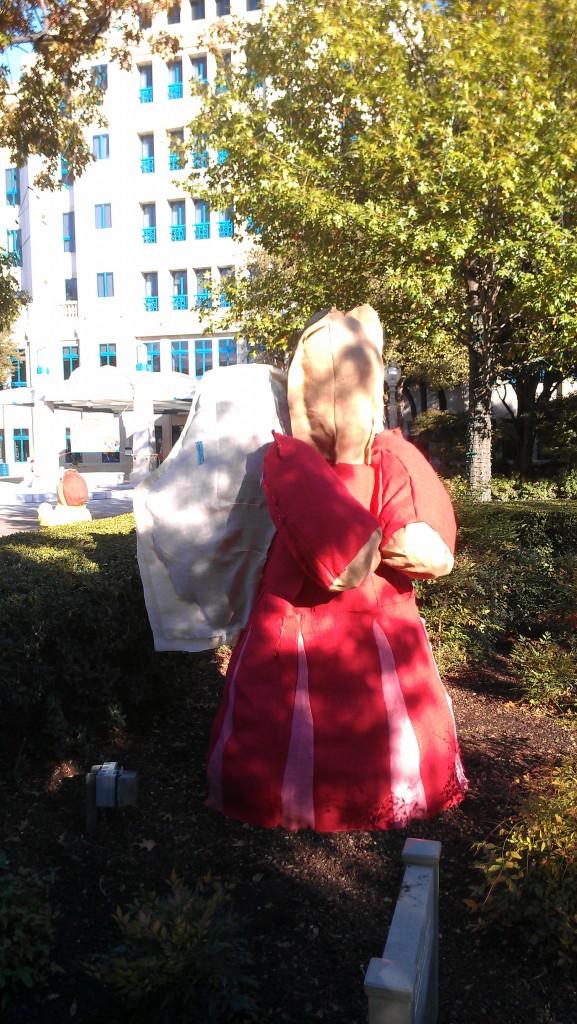 Now for the tragedy (yes, I am aware of what “tragedy” means in the classical sense, and I don’t really believe that Owl’s story rivals that of Oedipus or Antigone . . . well, maybe . . . ) 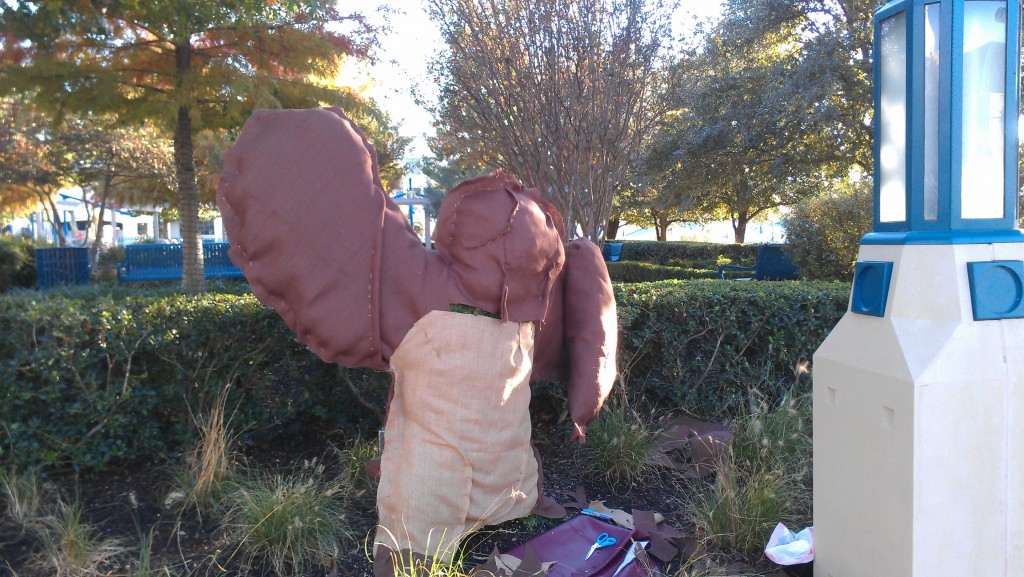 Pretty much all of Owl is awkward and the formulas necessary to determine the pattern pieces by math would probably come from levels of calculus beyond what I managed to take in school, so there was a lot of pinning. And a lot of fabric. Look at that beautiful owl.

I discovered last night that the bag of Owl parts is missing. I can think of two parking lots that he might have been left in, and I asked around, checked dumpsters. I worked on the rest of the gang today in hopes that someone would go, “Oh look, a trashbag full of cut up burlap with pins in it–this must be important! Let me find the owner!” but it was apparently not to be. So back to the fabric store for yet more (locally-priced and no current coupons, alas!) burlap–fortunately brown is a readily available color–then back out to Fort Worth for a FIRST FITTING, gaaaahhahahahaahh.