Usually for these panels, I just stitch on the velcro, then someone else glues the fabric to the backing. This taffeta fabric chosen to decorate for the Chinese New Year was too thin and the glue left visible dark spots. So instead of wrapping the fabric around the styrene, we made the panels like bags with the styrene as an insert.

I laid the styrene panel on top of the fabric and traced around it, then stitched on the outside of the line with the fabulous new Speed Janome. (I need to come up with a better name for it–and don’t say it already has one. I don’t tell you to name your kids Tiny Human Jones; don’t tell me to call my sewing machine P1200.) 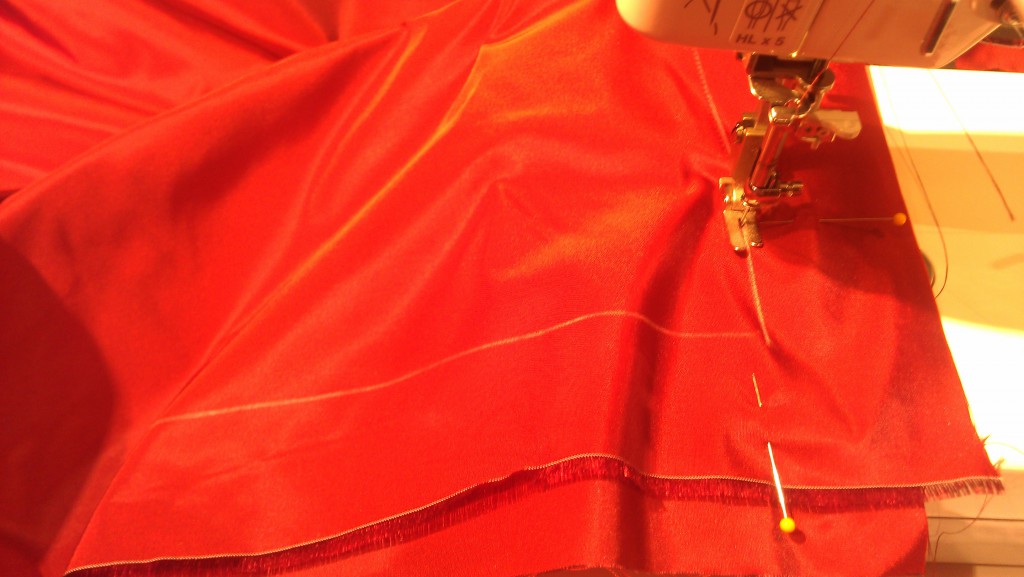 Snip the corners, turn it right side out, and poke the corners out with this corner-poking tool: 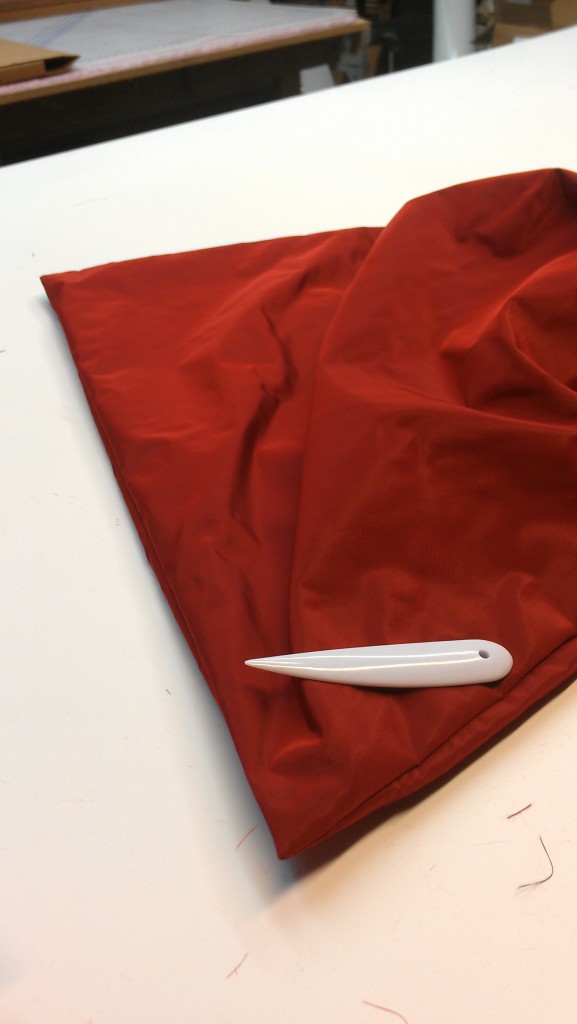 Press the pouch. Before: 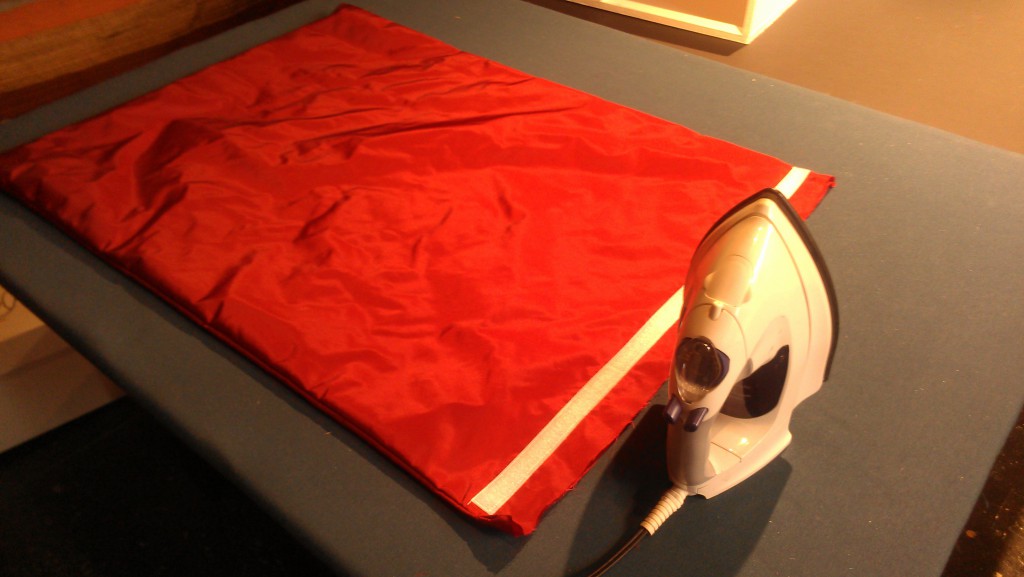 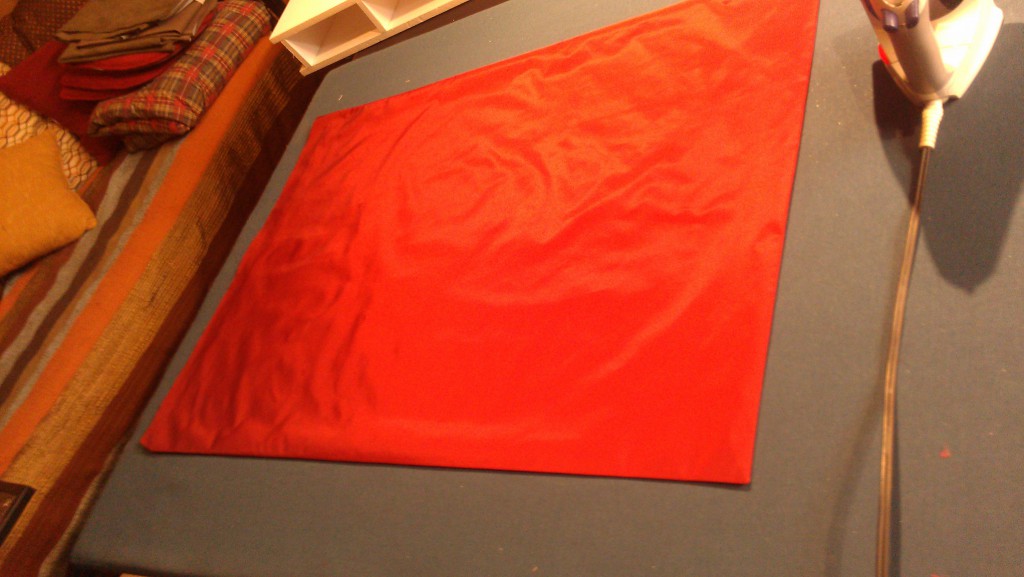 Eek, I ironed off the velcro! No, it’s on the other side. I had you for a minute there, didn’t I.

Don’t worry; I’m not going to justify that “question” with a question mark.

Double-sided tape to hold the velcro in place and pull the back fabric taut: 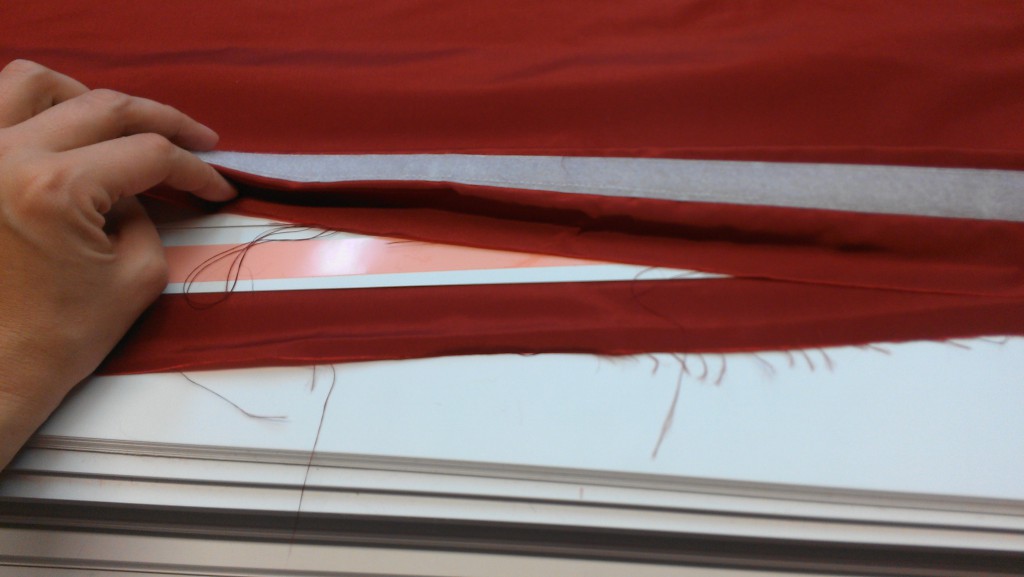 I cut the raw edges fairly close, then folded them inside and pinned: 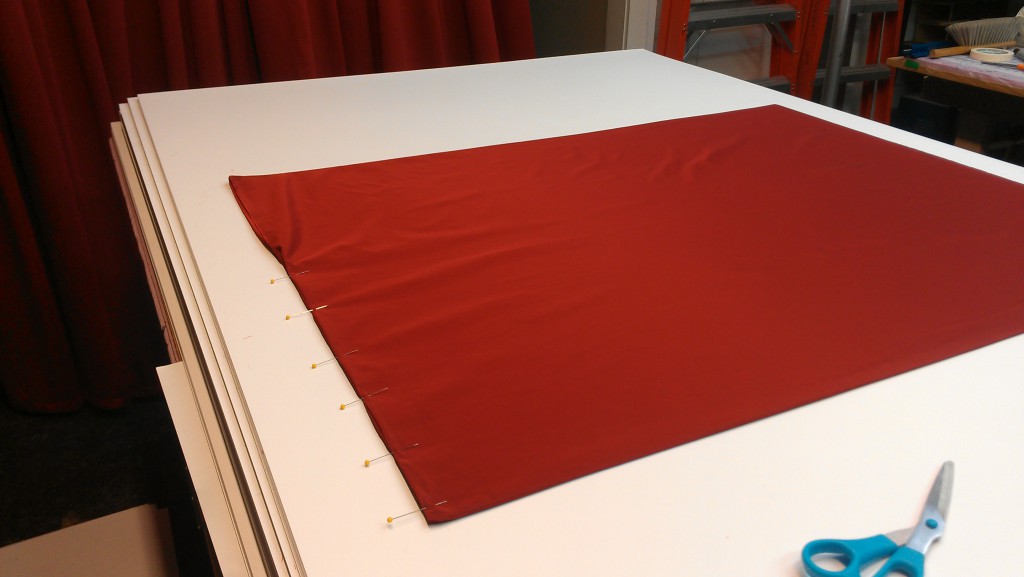 Larry made an extended table for the sewing machine, which was necessary for sewing something this stiff that had to be kept flat. 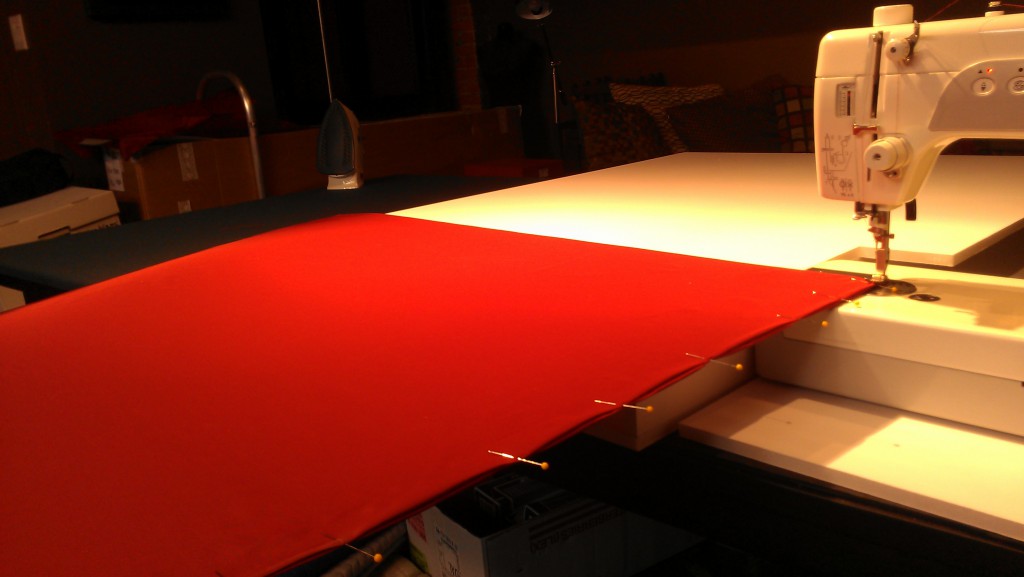 Here is a shot of it being slightly more visible: 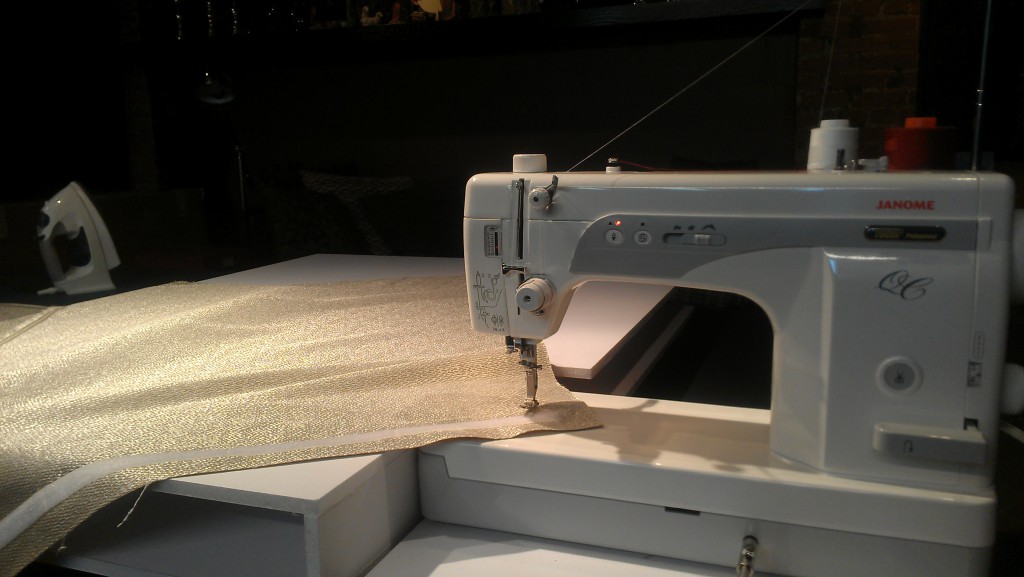 I broke into the Chinese New Year panels for some emergency velcro-sewing on some regular panels. There is a gap between the back of the sewing machine bed and the extension because the base didn’t take into account the width of the knee foot-raising lever.

Which I also had a hard time remembering to take into account. The first several panels, I snipped the threads with a physical scissors instead of the auto-snip scissors button. Since I associate my hand (upper body) with raising the presser foot and my foot (lower body) with making the machine run, trying to associate my knee (lower body) with raising the foot kept messing up my internal autopilot; I kept mixing up making the machine go with the knee-raiser and pushing the pedal with raising the presser foot. Other times, I would raise the foot by hand and by knee at the same time or confuse the fact that the knee raises the foot temporarily while the hand lever raises it until you manually lower it. We needed a couple dozen velcro strips, which wouldn’t truly test the new machine’s ability to handle the X-treme glue (no sic), but it could start to give an idea, as well as mentally prepare Speedy for his real full-time job that does not include hours of sewing on luxurious taffeta.

Here is what the glue looks like collected on the needle: 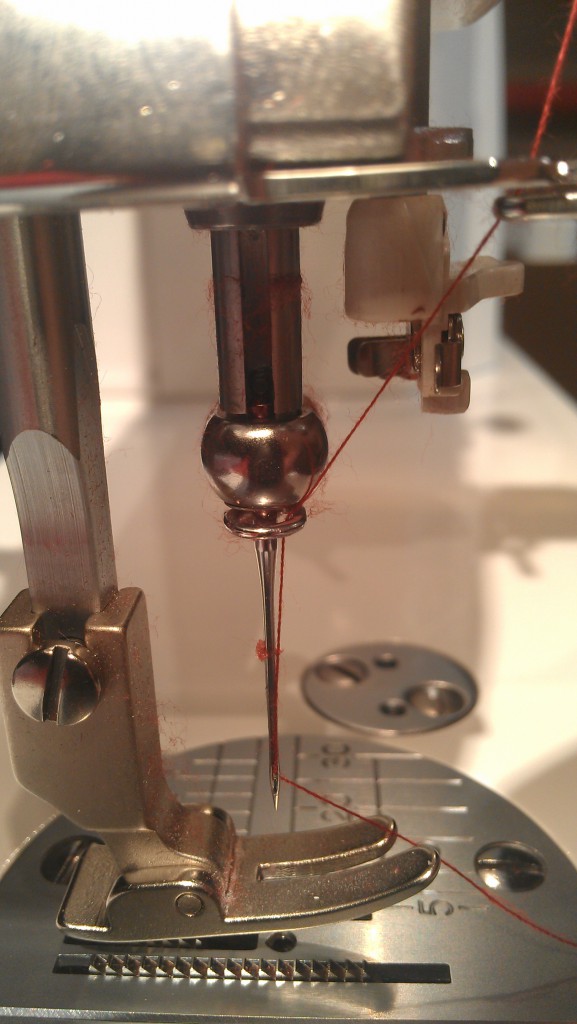 That’s the accumulation from just one strip.

These needles don’t really have much of an indent running down the shank, so the glue doesn’t build up in there. The side-loading needle so far seems to handle the glue and keep the thread away from it better than the usual front-loading needle.

One sort of problem I’ve noticed with this machine is its ability to corner: 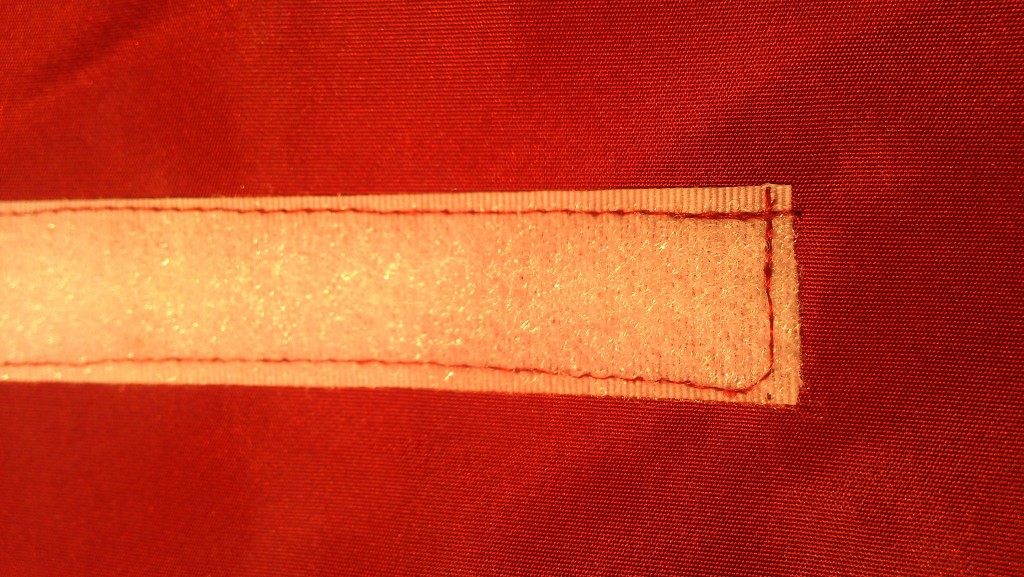 And again, to show that this is not an isolated incident: 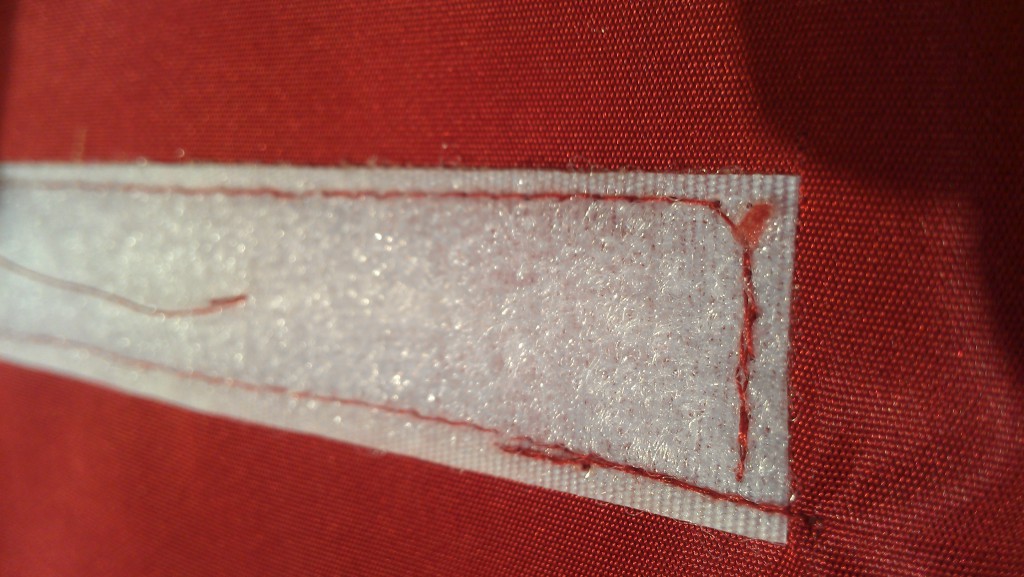 Though in this one, you can see where it’s trying.

Coming up slowly on the corners–and of course coming to a complete stop, raising the presser foot, then turning the fabric–does not seem to have any effect on its tendency to Tokyo drift.

Anyway, back to the New Year panels: 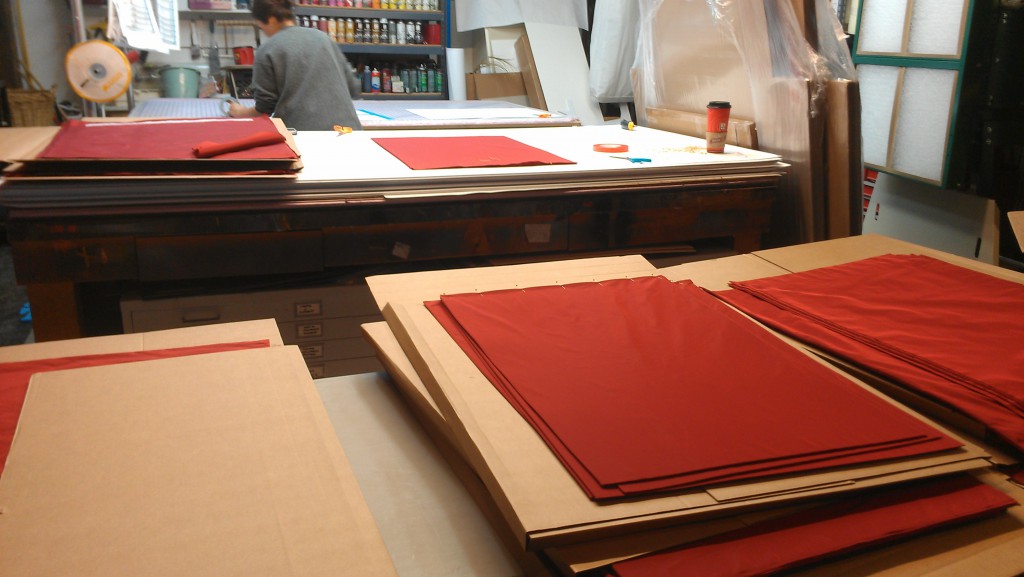 Because the process involves so many steps, and because doing all of one step before moving on to do all of the next step takes less time than cycling through all steps for one or for a small group, I tried to production-line as many stores at once as I could. They’re all divided up by very specific quantities and sizes–down to a half-inch difference between the panels for one store or another. So here is the mess of multiple stages going on and being kept carefully separate.

The Chinese New Year fabric is too thin to be glued to the styrene in the usual way, so this time I’m going to be sewing the panels into cases, rather than just sewing the velcro. Luckily, I’ve already done the velcro part, so it won’t be as last-minute time-consuming as it might have been.

We started out trying to avoid this, because it always looks better glued than sewn. I made a sample of it sewn and the gluer tried every possible technique to keep glue spots from seeping through and leaving marks.

I marked one side of the fabric to stitch on the lines, as they have to be very tight and very exact:

Stitch it, turn the fabric, press the edges and corners flat, insert the styrene with the seam allowances behind the sheet, secure the velcro straight with double-sided tape, fold the top over, pull it tight, and sew along the edge: 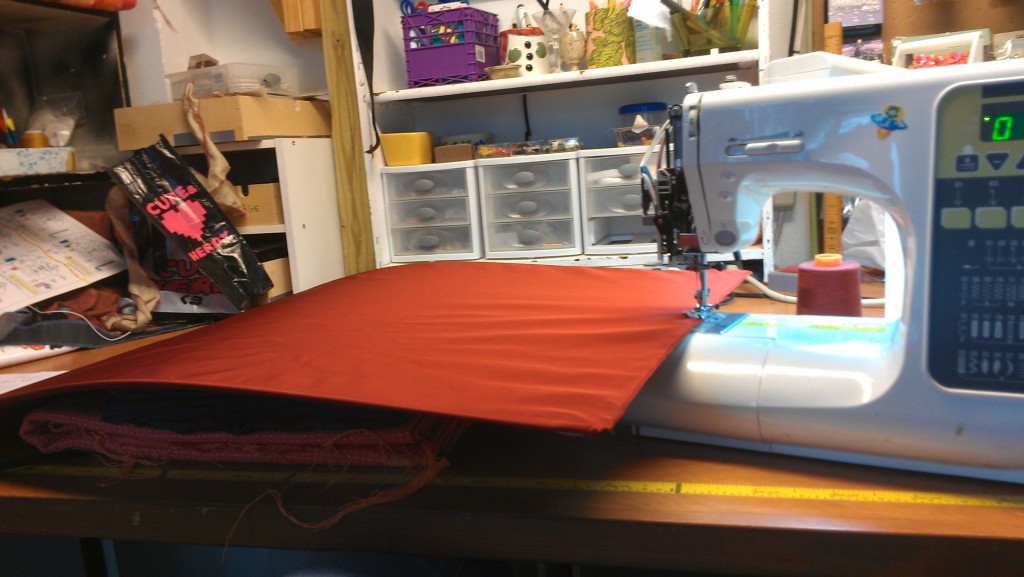 This part is really awkward because the machine can’t grip something this big and stiff in the same way it grips regular fabric. When discussing this project in advance, I swore up and down that stitching through styrene would break the needle. It doesn’t, for no apparent reason that I can figure, as styrene is plastic and relatively thick. So for the rest of these panels, I’ll be able to stitch intentionally on the styrene itself, which will secure the fabric a little more easily. I’ll also be working in a larger studio space so I can keep them flatter.

An added difficulty is this: you have to iron it perfectly and not wrinkle it before inserting the styrene. It cannot be ironed afterward without adding steam-related wrinkles and warps. The first sample I made wound up with these, and I had to start over.

Those are the finished boxes in the background: 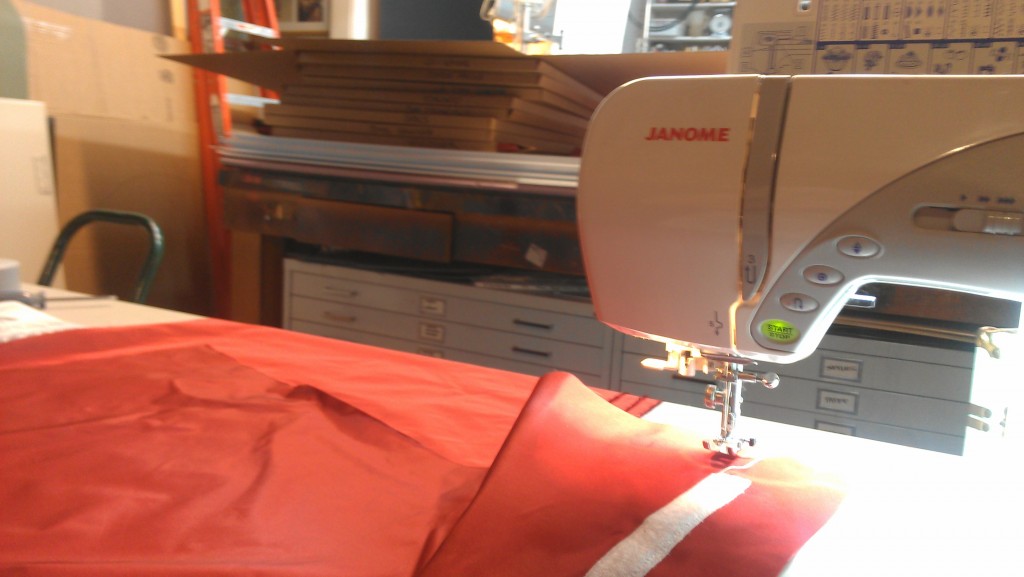 The fabric this go-round is fancy taffeta, which feels lovely, and would make a great dress, but its high-wrinkle tendency adds to the difficulty of using it for window displays. It also doesn’t work well with spray glue and makes the whole process especially hard for pretty much everyone involved. Except for me!

Boxes of velcro-sewn panels ready to be glued, with test-glued mini-panels sitting next to them: 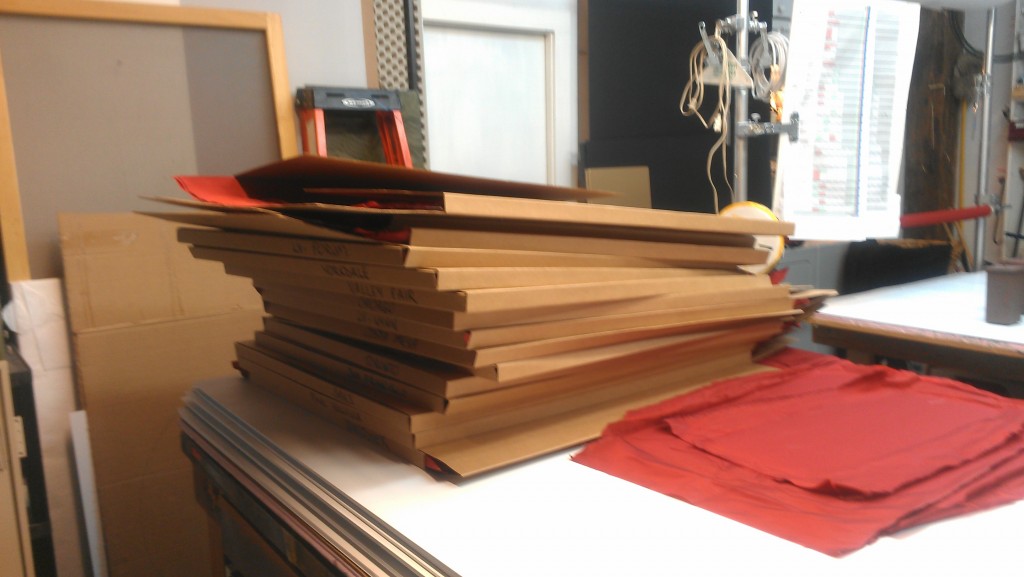